Share
Tweet
Linkedin
525 Views
( 76 votes, average: 4.6 out of 5)
What do you think about this article? Rate it using the stars above and let us know what you think in the comments below.
Summary: Many believe the LSAT is the main impediment toward diversity within the legal world. 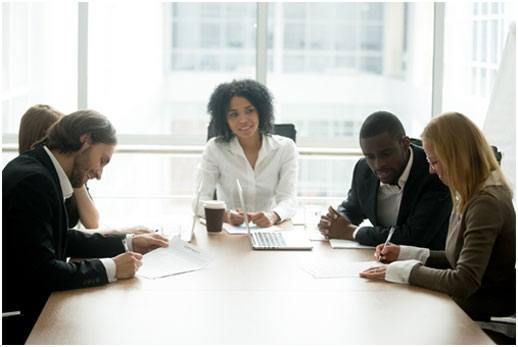 For many law firms, it’s been the same way for decades, if not centuries: The partners are for the most part older. They are more than likely male, and their skin color white.


Assign blame to this fact if you can find an adequate person, place or thing to which that assignation can be aimed. Because in many instances shooting a blind arrow into the bulging heaving body of law is bound to hit something that inhibits diversification.

Beyond color and sexual identity, there are additional factors that help to substantiate a male dominated mono-ethnic atmosphere. Those are:

Depending upon who a person is, these four nepotistic aspects of top-tier law can be an e-ticket for some while existing as an insurmountable barrier to others.

Nonetheless, such positives (depending upon who you are, of course) command less respect in today’s legal atmosphere due to the pressure on law firms to become more inclusive.

So with that, why are law firms so slow to become more diverse ethnically and sexually?

Some feel it’s the law schools, and yet while institutions such as Harvard, Yale and Princeton may wear the palm froms as top traditional law schools, they have within the legal world been some of the fastest institutions to become more diverse.

That would be the LSAT; the defining exam that an increasing number of critics claim has further fractured any hope the practice of law has of becoming more diverse of all people from all backgrounds.

The website Legal Career Path published an article that as long as law is practiced will, quite frankly, forever be evergreen. It is titled Becoming a Lawyer, and whether it was written 20 years ago or 20 minutes ago, the steps the article outlines will always remain the same.

In short, to become a lawyer the steps one has to take are as follows:

Of course, within this revolving door of potential law school students, it’s the second step that has received increasing scrutiny of late. The LSAT, a test that is said to favor a certain aspect of society while throwing to the wayside any other aspects though in and of themselves, those “other aspects” have more than proven their ability within the legal world.

The issues that swirl around the LSAT are not as much about the test being a distinction of those who are and who are not prepared to enter law school. The issues surrounding the LSAT are mainly societal, and focus on it being a test that some say supports class distinction.

In other words, those future law students who take and pass the LSAT have been traditionally known to come from places of endowment – wealthier families, which go in-hand with stronger (and more likely private) educations that indirectly gives these future law students a commanding edge toward getting into law school.

Of course no one need suggest who these future law students and their families are: We know who they are. The dilemma is more about what these students do not represent, and that’s diversity.

To break it down in a more direct manner, the privileged college students are the ones who get into law school; it’s been this way in the past, and continues to be this way today. But the college students who are not privileged – the ones who possibly went to a lower-tiered college like a state school or even a community college, come into the notion of taking the LSAT with a clear handicap that in many cases might prevent them from doing well on the test, or if at least not offer these students an even playing field toward taking the LSAT.

Since a privileged student is more likely to do well on the LSAT than a student who is not privileged can be a direct cause to a lack of diversity within the legal industry, we may now see one of the first truly genuine roadblocks toward diversity in law.

Google “getting rid of the LSAT” and you are bound to get results that demonstrate a conscious effort to ending the LSAT as a prerequisite to enter law school.

What is more surprising are the institutions that actively call for the LSAT to no longer be a requirement. Anyone from colleges to major legal organizations have announced their recent distaste for the LSAT.

For instance, a recent article posted on the Fortune website, titled LSAT No Longer Required for Top Law Schools Including Harvard, Georgetown, details the increasing number of prestigious law schools that either now or sometime in the future, will no longer require the LSAT to enter their law schools.

These law schools will instead accept the Graduate Record Examination (GRE) as a better, more comparable and fairer benchmark of an undergraduate’s ability to withstand the requirements of law school.

To many, this is a much more reasonable requirement for incoming law students as the GRE assesses real-world knowledge and analysis that has been learned by students during their years as undergraduates – not obtuse deduction and reasoning that virtually no one uses on a day-to-day basis such as what is featured in the LSAT.

Even the American Bar Association (ABA) has weighed in on the issue of the LSAT.

As the website Tipping The Scales reports in their article, ABA Mulls Ditching LSAT Requirement, as of this year, over 16 law schools within the United States allow future law students to substitute the GRE for the LSAT, the most recent being Chicago-Kent College of Law, whose dean, Harold J. Krent states the GRE option attracts a more academically diverse pool of students.

“In particular, we believe that students with backgrounds in math, science and engineering will be attracted to our vaunted programs in intellectual property law and in legal innovation and technology,” Krent says.

These students, of course, run the gamut of all ethnicities, sexual orientations as well as socio-economic levels. They are not, by far, the privileged few who used to pass the once-and-mighty LSAT, get admitted into a top law school, then go on to a lucrative career practicing law in a lucrative BigLaw firm.

What will be the outcome?

Like anything in life, most importantly the survival of life, the gene pools need to be mixed. For instance, it’s been a long-standing fact that multi-ethnic children are much healthier, stronger and more intelligent than those whose backgrounds belong strictly to one ethnic group.

The same can be said for law.

Law and the disputes, challenges and rewards that come out of law, is no longer an institution that concerns only the privileged few. Currently, many individuals from a whole host of diverse upbringings have found that their lives are also affected by law. And because of that, many individuals from a whole host of diverse upbringings feel it is their responsibility to enter the legal industry, particularly when considering their ethnic and socio-economic histories. This includes non-American law students as well; they too have something to bring to the table as they too will more likely represent those who in a previous time, may have been disenfranchised from the fairness of law.

The one takeaway any potential law student should understand about law is it is a constantly evolving animal. Nothing about law or its participants in the legal profession is stagnant. As to how law should look in the future, many people who are involved in the practice of law feel now is the time in which the legal industry needs to be representative of all people, their policies and beliefs.

In short, if law is to be fair, than how people are admitted into law school also has to be fair. Otherwise in this modern day and age, the legal system itself may face certain collapse, which is an instance our multi-cultural, multi-ethnic existence can ill afford.

Top 10 Ways to Get Your First Job after Law School

The Pros and Cons of Working in a Law Firm

I found huge and updated active job listings on LawCrossing and it was a pleasant site indeed.
Tami

LawCrossing Fact #171: Our “Job Source” key lets you display jobs from recruiters, employers, or both!