Share
Tweet
Linkedin
184 Views
( 24 votes, average: 5 out of 5)
What do you think about this article? Rate it using the stars above and let us know what you think in the comments below.
Summary: The field of law is very competitive. This is why it is never too early to begin preparing for law school. 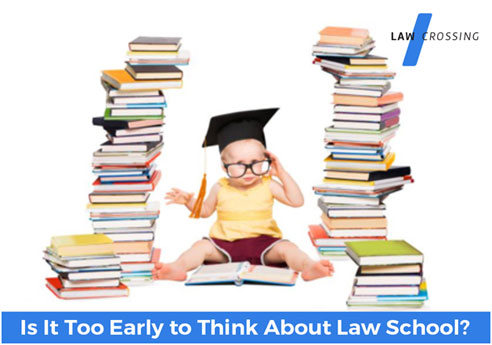 For a lot of us, childhood was about being hammered; hammered that is by adulthood. In the case of some of us, our parents made us think in a manner that some social anthropologists and psychologists among other socially related fields of study would regard as unhealthy. We were encouraged, if not persuaded with language, fear, responsibility and eventual social belonging to be successes and actively think about our future careers from a very early age.


For example, at 10 years old, some of our peers were entered into the fledgling beginnings of honors programs at our schools, then on weekends, enrichment studies. Sure, we had pastimes, playtimes – all sorts of time, particularly during winter, spring and summer break. But much of that time was spent shoring our academic foundation.

We took college-level extension courses while in middle school, and by the time our freshman year in high school was in full swing, we already realized a career path that we’d like to take. The thing is with this, often that career path was non-negotiable once we accepted it, and our parents began paying for the necessary assets that would better prepare us for the mandatory education we were to eventually receive.

Thus, it was never too early to prepare. From medicine to the sciences, engineering to advanced education in the arts – our track found us as soon as we found it. And the grip was as relentless as the pressure – for better or worse – was on the demands that we learn, plan, plan, learn, then rinse and repeat the plan and learn thing.

And why was this? Because this is what it took to be placed on the road to a successful career; it took early planning as the fields we chose that invariably lead to a successful and fulfilling (financially and otherwise) future, were often highly competitive. This is why we planned ahead, or at least were told by voices of authority that this is why we were encouraged to plan now for the future.

To be honest, it’s never too early. Then, on the other hand, it’s always too early. Here’s what’s meant by that.

While some young adults pick out their future careers, others are somewhat forced into theirs, particularly by their parents. Thus, there are two categories that exist for young students who are on a career track, law notwithstanding. There are those young students who:

Of course, your childhood may vary. But the facts as they stand regarding of early planning of a career, particularly a law career, have unparalleled benefits.

For instance, with law, no one needs to tell you that it is a competitive field. All you need do is read online about acceptance rates of the top law schools throughout the nation (and yes, when’s all said and done, it will behoove you and your law career to attend one of the top schools in the nation), the range of LSAT scores that will help you get into a top law school, and the bar exam difficulty and passage rates (depending upon your state) in order for you, after graduating law school, to proceed onward toward a legal career within your practice area.

In short all this “effort,” from a straight-A grade point average, to enrichment courses, to plans and resolve to attend a top-tier law school while still in undergraduate demonstrate how competitive and demanding law school and the law profession is.

If that doesn’t tell you the sooner you prepare the better, you might be heading into the wrong profession.

Preparing yourself for law school

If law school and the practice of law is truly in your future’s wheelhouse, then preparation for what’s to come in lieu of a legal education cannot occur soon enough.

College Xpress.com lists these five steps that future law students should take while in undergraduate school in order to be better prepared for their education. As the website states, everything a student does throughout their four years in college can either help or hurt them when they start applying to law schools. This is why it’s important that future law students think about their courses, extracurricular activities, jobs and internships in terms of how each can affect their prospects.

It’s always a good practice when applying to any post-graduate program, law notwithstanding, to know where you stand in the fray of other students who hope to accomplish the same as you with their future.

As was earlier said, law school can be very competitive. In fact, law schools in and of themselves are extremely competitive with each other. How are they competitive? Through their graduates, and even more pressing, the law firms those graduates eventually go to begin their practice. This is why it befits undergraduates to do as well as possible during their first four years of college, and of course apply themselves beyond academics through internships, community service, or other extracurricular activities such as an art or a sport.

Sure, while there are those within the legal education and practice business who maintain anything beyond academic grades and the LSAT matters very little to a top law school, you never know. Some law schools may take into account how well-rounded you are as a person and a student, which can only come from having real-life experiences outside of the day-to-day four-year grind of college studies.

Then, of course, there is your state’s bar exam. You need to know how difficult that exam is, especially when compared to other states’ bar exams. Because the bar exams in states such as California and Louisiana are so difficult, newly graduated attorneys tend to avoid these states simply because of toughness of their bar exams.

Below are two charts that are imperative to undergraduates who are considering law school and a career in law. The first chart shows the top 25 law schools in the nation, while the second chart reveals the states with the toughest bar exams.

This graph is based on a 2019 report by U.S. News and World Report:

States with the most difficult bar exams

Provided by a recent LawCrossing feature, the following text reveals the six most difficult states to pass the bar exam.

The list of which states have the most difficult bar exams continuously change because states keep changing whether or not they will implement the UBE. However, as of publication, the following are the non-UBE states where it is notoriously hard to pass the bar.

Even with all the love and desire you may have to study law, get a law degree then go on to practice law, there still stands a chance that all your preparation can burn you out. It is imperative more than anything else, that you maintain a healthy and balanced lifestyle as you prepare yourself to practice law.

After all, practicing law will be a difficult as it is. There will be pressure to perform and deadlines to respect, not to mention sudden assignments from partners, senior partners on down to senior associates.

In short, enjoy your time now even as preparing yourself for law might seem frivolous, tedious or terrifying. Remember, it truly is never too early to prepare yourself for your law career. In fact, the sooner you do so, the better off you will be.

LawCrossing is a unique website. The email notification feature was the best thing about the site. Amazing!
Christopher