( 486 votes, average: 4.5 out of 5)
What do you think about this article? Rate it using the stars above and let us know what you think in the comments below.
Summary: The name of the resume game is getting results. And those results equal job interviews. 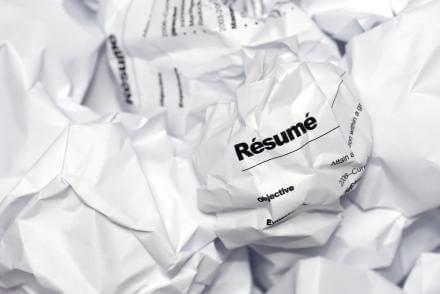 If you've read Mitch Albom's hit novel, you'd know that there will be five people you'll meet in heaven after you die. Following that same thought about the rule of fives, there are, inevitably, five things you should never put on your resume. I mean never, ever, even if your mommy begs you to. They just cannot go there. Let me start this discussion with the acknowledgement that the deadly five used to be common on many resumes. Today's resumes are a different breed of cat. It used to be that you could slap some information on a piece of paper, call it a resume, and send it out.

Today, resumes – and cover letters – must be crafted with thought and precision. Notice that word "crafted"? You need to be the Norm Abram of job searching.

The five things you never want on your resume are: Personal data, photos, past salary history or current salary expectations, gimmicks, and reasons why you've left prior jobs.

I once saw a resume where, just underneath the client's name, address and phone, the following information appeared: marital status, wedding date, daughter's name, and her birth date. This was undoubtedly information meant to give the resume a personal touch; maybe even an attempt to make a personal connection. It fell flat.

Not only do you not want any of that information on your resume – it looks unprofessional – but by including it you just violated your own privacy. You might as well include your social security number, bank account and ABA routing numbers, and the password to your e-mail account.

Yes, you want to stand out from the crowd. But you don't want to do it while looking like a doofus.

All you want to see at the top of a resume is your name, address, phone number, fax number if you have one, and e-mail address. If you have a cell phone and it's the best number to reach you, include it and make sure it is listed as your cell number. Pager numbers aren't necessary – it looks too desperate. If pressed for space, omit the fax number but always include an e-mail address.

You want to be judged on your qualifications alone not on how you look. America, in particular, puts way too much emphasis on how someone looks as opposed to a person's qualifications. I think we can probably blame Hollywood for that.

I once worked with a woman who looked so different off duty that I almost didn't recognize her. We worked in a large law firm in Philadelphia. By day, she was dressed at the height of fashion, hair perfect, contact lenses, nails polished, flawless make-up. We were both working one weekend - what lawyer doesn't do that at one time in their careers as associate drones? – and I almost fell over at how different she looked: glasses, no make-up, old blue jeans, sneakers. I thought she looked much better and I told her so.

There is one caveat about no photos on resumes, though: if you're a model or performing artist. If you're in one of those two professions, you must put a photo with your resume. Frequently, actors will have an 8 x 10 head shot on one side and their credits on the other.

Salary expectations are bargaining chips best left for the interview process. If someone asks what your salary expectation is – and you don't have a clue as to how much the position pays – answer that question with a question. Ask the employer what the job pays before you answer. Try not to bid against yourself.

And if the salary is not what you want (let's not go into what you need), empower yourself to say one of two things: "That figure isn't high enough for my qualifications" or "No, thanks, I appreciate the time you took for this interview" and end the interview.

Most people won't want to make a scene like that by standing up for themselves and their own value in an interview. It's very hard to do if you feel desperate. Try, if you can, to always approach an interview with the attitude that you don't "need" the job but, instead, "desire" the job.

Gimmicks on resumes never work. There are folks out there who love the color purple. It's a wonderful color, but it's not the color for your stationery and it's not the color to use for your resume. When it comes to paper choice and color, I prefer a very light blue which helps me stand out enough from the white and off-white crowd, but not so much that it's insulting.

If your name is cute, something like Shanda Leer, please do not, do not, do not put watermarks of chandeliers all over your stationery. And don't even consider sending gimmicks after your resume has arrived. Sending the prospective employer balloons, candy, or tickets to an Orioles game will not win friends and influence people.

(P.S. My husband really had a student in his class named Shanda Leer)

It may be tempting on a resume to explain away any abnormalities that may be seen as unusual in your chronological employment history. Resist the temptation. No matter how you say it, it's a strike against you. Your company could have downsized and you could have been laid off; doesn't matter. You may have left under duress; doesn't matter.

It's better to never raise the red flag. Will it come up in the interview? Maybe. You'll just have to wait and see.

How to Mess Up Your Cover Letter … Without Even Trying

So now you have a list of five things you never want on a resume. Let's look at some of the things you want to avoid in your cover letter.

First, always make sure you properly address your letter to the right company and the right person in that company. Very often an ad will say to send a cover letter and resume to the human resources department or the person in charge of hiring.

That's when a little research is in order.

If you know the name of the company, make a phone call and find out the name of the person in charge of hiring. If all you can find out is that it's the human resources department, ask for the manager's name. If that person has a unisex name, like Pat, find out whether it's a man or a woman. It'll take about five extra minutes but it will make a difference, trust me on this. Nearly every company has their own website and you may be able to find that information there as well.

If you're answering a blind ad and the company name isn't included, the above advice is impossible to adhere to. Never address a cover letter "To Whom it May Concern". You're better off using something like "Dear Sir/Madam". I've even used a blank salutation like "Hello" with reasonable results.

Second, make sure your cover letter is free of typos and is perfect in terms of grammar, spelling and punctuation. The last thing you want an employer to see is a cover letter filled with mistakes. They will see you as being someone who doesn't care about your appearance. Remember, this is your one best shot to impress an employer. If you care about how you appear to them, they'll believe you'll care about their company, too.

Third, take the time to tailor each cover letter to the specific job you're applying for (Yeah, I could have said "for which you are applying" but I like ending sentences with prepositions). Don't assume that you can use "canned" cover letter talk, like how great a worker you are or that your skills will enhance their business. It won't get the job done these days.

I recommend using the same kind of bullet points you do in your resume, leaving plenty of white space so it reads easily. You will want to punch up your experience only as it relates to the specific job description advertised and use those bullet points to show why you're the best fit for that job.

So, now you have eight things you must absolutely avoid in resumes and cover letters. The competition is especially fierce these days with more and more college graduates and Masters and Doctoral graduates all vying for the same jobs.

Dress your resume and cover letter for success – just as you would if you were going to attend the Oscars.

Please see the following articles for more information about resumes:

( 486 votes, average: 4.5 out of 5)
What do you think about this article? Rate it using the stars above and let us know what you think in the comments below.