California Also Suffers Decline in Bar Pass RatesIs it mandatory to pass the CA bar to practice in CA?

Last Minute Reading for Bar Exam TakersReasons Not to Combine Two Bar ExamsCan you get a job in a LA biglaw firm before clearing the CA bar exam?
< Back To All Articles

How to Pass the Bar Exam

Share
Tweet
Linkedin
3442 Views
( 345 votes, average: 5 out of 5)
What do you think about this article? Rate it using the stars above and let us know what you think in the comments below.
Summary: Preparing for the bar exam takes hard work and dedication. Here is one man's experience preparing and taking this difficult exam. 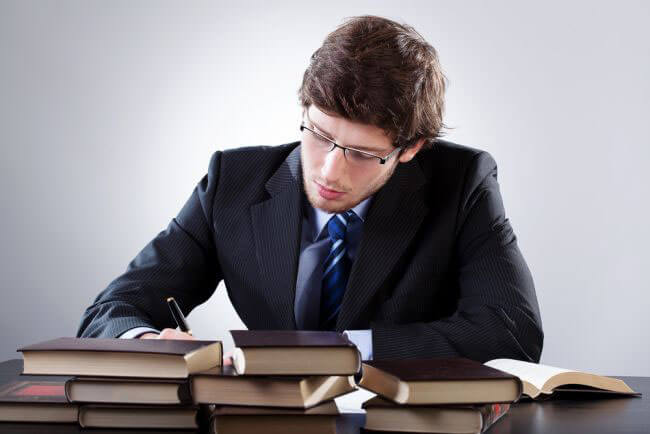 After completing a judicial clerkship, I found myself in a bar-review course watching a bloated, balding man on a video monitor drone on about things I had willfully forgotten moments after completing my first-year finals.

The Bar is a Marathon

My instructor likened studying for the bar to training for some sort of epic athletic event. I distinctly remember his admonition: "The bar is like a marathon, not a sprint. You can't cram, and if you study too much too quickly, you'll burn out."

If you've ever done something really tedious in your life, I guarantee this is worse. It is boring even for those who loved law school. For me it was absolutely excruciating.

Because of my fundamental ambivalence about being a lawyer, I kicked and screamed every step of the way. I couldn't bring myself to do the practice essays or the sample performance tests. While others paced themselves for the long haul, I went to the movies. I knew I was courting disaster.

In my increasingly frequent nightmares, I could almost hear the snickering of my future colleagues when they discovered I hadn't passed. I imagined the pain and public shame of having to go through the entire process again.

The test was a month away, and my fears only intensified as the date approached. When a month before the test came around, I went into a panic and finally started studying.

Driven by blind fear, I settled into a grueling regimen. After the daily video lecture, I secluded myself in the most remote corner of the law library I could find. I reviewed my notes and commercial course outlines for hours and hours, as though my life depended on it. I took breaks only to go to the bathroom or get more caffeine. By the time I got home at 6:30 p.m., my body twitched uncontrollably.

After a few days of this unrelenting schedule, I started to feel I was gathering momentum. But was it too late? How would I cram two full months' worth of studying into three weeks? As I told my roommate at the time, "My life is on the line."

The Morning of the Test

The day finally arrived. That morning my stomach was in my throat. I left my Berkeley apartment for the Oakland Convention Center more than an hour early. I neurotically checked and rechecked to make sure I had everything: picture ID, pens and pencils, and earplugs-I had lots of earplugs.

After passing through what felt like Customs, I took my seat along with 3,000 other would-be lawyers. The countless rows of metal tables on the floor of the convention center were straight out of a Kafka novel.

From the distant front of the room came a disembodied male voice. For 30 minutes, it delivered test instructions in an amplified, droning monotone: "You will have exactly three hours to complete Section One; you will have exactly an hour for lunch, and then you will return for the afternoon session, which will consist of a performance examination lasting three hours."

Finally, the dreaded words came: "You may begin."

During the test itself, I remember suffering almost every conceivable distraction. Concentrating was almost impossible, even with my scores of earplugs. Whenever someone got up to go to the bathroom, whenever someone sneezed, I looked up. An almost continuous stream of pop tunes kept running through my head.

Somehow I survived, and two and a half days later the test was over. I didn't feel triumph or anxiety or even relief. I was numb and fairly certain I had blown it. The more people I spoke to afterward, the more this seemed to be confirmed.

My Theory of Failure

I was working at a large law firm. There, I developed my theory of failure. The theory holds that failure always contains an underlying lesson. The difficulty comes in figuring out what that lesson is. That's why you see people making the same mistakes over and over again.

I was sure I would soon have the opportunity to learn the lesson of failing the California Bar exam. In fact, I already knew what it was: that I shouldn't be a lawyer.

Bar results were due out the day after Thanksgiving. As the cruel date approached, various doomsday fantasies repeated in my mind. I thought again about my likely humiliation at the law firm.

The night before the results came out, I got almost no sleep. I found myself pleading with God to let me pass. For good measure, I threw in some metaphysical arguments. I told God that there was nothing for me to learn from failing the bar-nothing that I didn't already know.

The Day of Reckoning

As night turned to early morning, the day of reckoning was finally upon me. Because I didn't have to work, I was free to obsessively anticipate the mail. When the mailman finally came through the gate, I raced out to meet him.

He handed me the mail. I rifled past the direct-mail ads and credit card solicitations until I found it: The Envelope. The moment was like one of those near-death experiences you read about where everything is in slow motion and you feel eerily calm. I walked back into the lobby of my apartment building. After a couple of deep breaths, I tore the letter open and read the first line: "The California State Bar is pleased to congratulate . . ."

I found a job through LawCrossing. You guys are doing a great job. I will use you guys again if I ever need to. Thanks.
Douglas A.

LawCrossing Fact #186: LawCrossing has virtually the largest collection of job listings in the world.