Share
Tweet
Linkedin
426 Views
( 58 votes, average: 4.4 out of 5)
What do you think about this article? Rate it using the stars above and let us know what you think in the comments below. 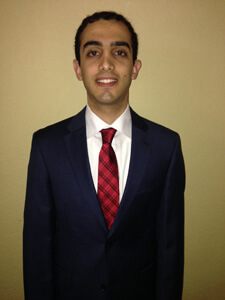 Ali Elachkar is a third year law student at Pepperdine Law School and anticipates a May 2015 graduation. Although he has several areas of interest including public international law, he plans on practicing criminal prosecution in California. Ali ultimately wants to be involved with the International Criminal Court (ICC) or the International Court of Justice (ICJ). He anticipates taking the California State Bar in February 2015.

Ali was born in Hollywood and raised in Southern California. When asked about his family, he said, "I have two brothers, I am the middle child. My dad has a lot of brothers and sisters so family events are always fun."

Since 2012, Ali has been a member of the International Law Society at Pepperdine Law School. He also attended several conferences held by the American Society of International Law (ASIL), a nonprofit, nonpartisan, educational membership organization, based in Washington, DC.

From June 2013 to December 2013, Ali interned at the Department of Justices' Office in London, United Kingdom. "I worked on many cases and my final project was a recommendation on when to invoke sovereign immunity, I believe there is legal precedent for the US to invoke immunity in more situations than we currently were."

Since January 2014, Ali has been working with the Los Angeles District Attorney's Office in downtown Los Angeles. He has been working on numerous cases, including some high profile ones. "I do everything from trial preparation, exhibits, research, etc. I have my first preliminary hearing in July."

What are Ali's hobbies and interests? "I like to travel, I am interested in food / drink, and international politics. I am a big fan of self-help/improvement, I am always trying to improve bad habits of mine."He also enjoys Thai food and reading current news and political issues.

Why did Ali go into the law? "I flirted with the idea of law school for a long time; I had wanted to go for a prolonged period, but the bad employment news was starting to filter down to potential law students. I weighed my options at the time and the only thing holding me back was myself and my excuses."

He shared his aims and aspirations. "I have two professional passions, law and foreign affairs. I believe these two merge in certain international courts like the ICC and the ICJ. I would love to prosecute war crimes after honing my skills domestically as a prosecutor."

Are there any particular achievements that Ali would like to share? "I was involved in Model United Nations for three years in undergrad, and it was probably the most educational and entertaining activity I did. I was also very involved in the Political Science Club at Cal Poly, we had a small major and it was really nice knowing everyone in class and going out with these persons off campus."

When asked about his key accomplishments, he acknowledged, "My parents came from a very turbulent region and were able to come to the US and not only gain an education but to live a comfortable and stable life. I will be the first attorney in my family and I am proud that my family takes pride in what I do and what I hope to accomplish."

Ali then discussed the key skills and strengths that he will use to further his career goals. He stated:

"I hate to sound cliché, but I believe I have a strong and dedicated work ethic. I always get along with persons I work with and I think this is invaluable. I see everyone as equal; being kind only to someone who can further your professional career is shortsighted and speaks volumes about your personal character. I always try to exhibit a good sense of humor, no one said work has to be dull. Being positive and always ready to learn and put in your dues."

As for his weakness, he admitted, "I think public speaking is something I need improvement on, and will be valuable if I continue with the district attorney's office. I wish I were a better cook. Sometimes I do not stick to my exercise schedule."

Law school can be stressful at times, so Ali shared how he relieves stress. "Time permitting, I love to exercise. I am currently doing the 'insanity' regimen."

"I am a big believer in making a list and checking items off when they are completed. I do this at work and at home for chores. It works, and it works well. I sort items by deadline if applicable and try to group tasks for efficiency if applicable."

Where does he derive his confidence? "Practice makes perfect. I am not always confident when trying something the first time, but I know if I do not do as well as I hope, practice will improve this performance."

If Ali had three wishes, what would he wish for? "As cliché as this might sound, my first wish would be a real and lasting world peace. My second wish would be an end to poverty. And my last wish would be to have all war criminals prosecuted and imprisoned."

In regard to handling fear, he said, "I remind myself that I am not the first person to go through this, and I won't be the last person. Others made it through and so will I. In the larger scheme of things, the things I 'fear' are really trivial."

What language is Ali fluent/conversant in? "My parents are both from the Middle East and they have passed on the Arabic language to me. I can speak it moderately well; my reading is OK."

Has he been part of any study abroad program? "Yes, I did two semesters abroad in London, UK. I was working at the DOJ and taking classes. It was a great experience because during my time off I was able to travel extensively."

Has Ali participated in community service? "My job prior to law school was at the City of Diamond Bar. I volunteered briefly before applying and getting the job; I was there for 5 years (2007-2012) before I left to pursue a legal education. I worked my way up 4 different positions."

Legal Role Models, Personal Philosophy, People You Want to Surround Yourself With and Most Influential Traveling Experience

Does Ali have any legal role models? "I really like the District Attorney's I work with. They always have a great attitude and are genuinely fun people to be around. They love their job and what they do and that is a welcome sight in a field where I feel many do not like what they do."

What is his personal philosophy? "There is a lexus commercial that uses this quote and I think it sums up my life philosophy quite well, I admit I do not know who initially said it. 'One day your life will flash before your eyes; make it worth watching.'"Ali said the quote resonates with him because you only live once and individuals should take advantage of the opportunities they receive while they are living.

The future attorney talked about what he believes holds more truth in light of his personal philosophy. Was it fate or choice? "Choice. It is absolutely true that some things are out of our hands, BUT you will miss 100% of the shots you do not take. I am the type of person that will nag myself if I wanted to do something and passed it up; this has led me to both poor and great decisions."

"I strongly dislike people who do things just to put it on a resume; your lack of work ethic is glaring and you are taking an opportunity away from someone who really wants it. I avoid these type of persons. I also avoid persons who are intensely competitive. I don't like lose-lose situations or questions and try to avoid those as much as possible. I have no problem not giving an answer or not doing something if doing it will cause more harm or problems."

I found the site to be very useful. The comprehensiveness of LawCrossing really impressed me.
Jon A.

LawCrossing Fact #241: We go out of our way to tell you which jobs are the best in the market.