The Importance of Having a Firm Commitment to Practicing Law

( 264 votes, average: 4.8 out of 5)
What do you think about this article? Rate it using the stars above and let us know what you think in the comments below.
Summary: One of the major reasons why attorneys do not get offers or even interviews from law firms is their perceived lack of commitment to practicing law. 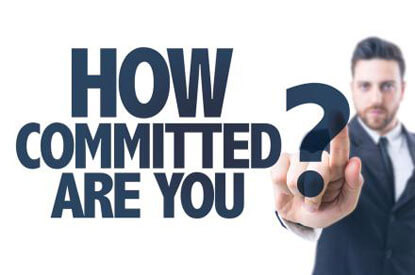 One of the major reasons why attorneys do not get offers or even interviews from law firms is their perceived lack of commitment to practicing law. These attorneys demonstrate their lack of commitment in one or more various ways, whether by their resume/job history, their cover letter or their comments in interviews. Once a firm develops the impression that a candidate lacks serious commitment (rightly or wrongly), the firm will typically reject that candidate.

For example, I recently came across an associate whose general credentials were pretty good, if not great. Unfortunately, I could not help this candidate because he had not practiced law – or worked in any other capacity – for the prior three years. Such “gaps” in employment are seen as “red flags” by law firms. They can often be fatal early on unless the candidate has a very good reason to explain it. Here, however, the candidate had quit his associate position at a highly regarded law firm and spent the last three years hopping through 50+ countries on six continents because “he loves world travel.” He felt that his unusual adventure could be used as a positive in his search to return to legal practice in a comparable highly regarded law firm.

I had unfortunately had to explain to him that he had made a serious mistake, at least as far as his legal career was concerned. During those three years he was circling the globe, whatever legal skills he had developed had become largely stale and outdated. Moreover, his market value had dropped considerably by his simply moving up three years in seniority with nothing material to show for it. But the most damaging aspect of his choice to quit his excellent law firm and travel for three years was that it firmly demonstrated that he was not seriously committed to practicing law. Absent extraordinary credentials (Harvard Law, big book of business, etc.) why would a firm even consider him when they have countless other much more seriously committed lawyers to choose from? This is also one of the reasons why candidates who have left the law profession – no matter how legitimate the reason – have a much harder time finding good legal jobs.

Our Founder and CEO, Harrison Barnes, recently wrote an article explaining why there are no “lifestyle” firms that makes the same point. Aside from the practical and economic reasons why such firms do not last long, the very idea of strongly prioritizing other aspects of one’s life – whether it is family, travel, hobbies, etc. – is antithetical to the huge amount of commitment, hard work and long hours that most believe must be undertaken in order to simply survive in the legal profession, much less succeed. In other words, most firms view candidates who express serious interest or concern with other things besides their legal work as “not getting it.”

Finally, please note that I am not saying that to have major interests or priorities in life besides legal work is wrong. Far from it - there are many good reasons to have such interests and priorities. I am only saying that in the legal market, candidates need to demonstrate their serious commitment to their clients and the practice of law if they want to get good legal jobs.

After Graduating from Law School, How Long Does Someone Need to Practice Before Becoming a Partner?

Gordon K. Sattro, Director of Corporate Development at Legal Authority is an Innovator

After Graduating from Law School, How Long Does Someone Need to Practice Before Becoming a Partner?

Gordon K. Sattro, Director of Corporate Development at Legal Authority is an Innovator