Teresa Lo
What do you think about this article? Rate it using the stars above and let us know what you think in the comments below.
Summary: Is law collapsing? Find out in this article. 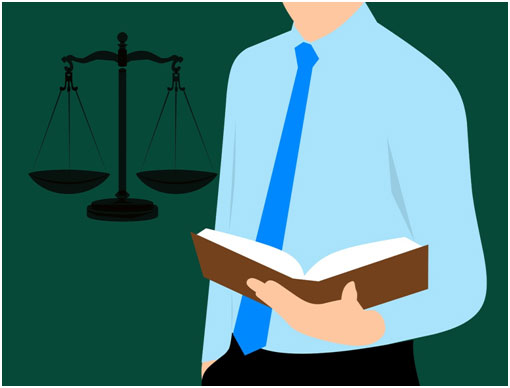 After the Great Recession in 2008, the number of law school applications dropped steadily each year. Would-be lawyers were scared off by high student loan debt and a low number of good-paying positions, and many law schools reacted by either lowering their admission standards or downsizing their programs. Talented applicants who may have once considered the field of law were moving towards technology, medicine, or business, and legal experts wondered if the profession was in trouble.


However, almost ten years later, the number of law school applications is rising again, and the public is seeing the value of a law degree, even for people who don’t end up using it to become lawyers. So does this mean that the law school crisis is over? Or was there ever a crisis to begin with? For people considering law school, it is important to weigh in on the landscape and decide whether or not law is right for you. For those already enrolled, it is important to know what is going on in the industry before graduation.

Why did people think there was a crisis in the legal field?
In 2004, the number of American law school applications was almost 100,000, according to the Law School Admission Council, but that number dropped significantly. In 2012, the number was less than 70,000, and the nearly 30% decrease had people worried that law was not an appealing career to talented people. In 2016, only 56,500 law school applications were filed, according to Law.com.

In 2008, the United States experienced an awful financial crisis, which caused the loss of 8.4 million jobs, the housing bubble to burst, and the stock market to crash. Many law school graduates who sought jobs during the recession found it hard to land one that paid well, but that didn’t forgive the six-figure student loan debts they took on. Law, which for decades was thought of as a high-paying, high-status, and stable profession, was no longer that option for thousands of Americans stuck with seemingly useless J.D.s.

“At present, the system faces considerable pressure because of the price many students pay for their education, the large amount of student debt, consecutive years of sharply falling applications, and dramatic changes, possibly structural, in the market for jobs available to law graduates. These factors have resulted in great financial stress on law schools, damage to career and economic prospects of many recent graduates, and diminished public confidence in the system of legal education. The predicament of so many students and so many recent graduates who may never procure the employment they anticipated when they enrolled in their law schools is a compelling reality that should be heeded by all who is involved in our system of legal education,” the American Bar Association wrote in 2014.

The Trump Bump in 2018
Besides the decrease of many high-paying legal jobs, lawyers in recent years also faced other changes to the profession. The internet provided potential clients with free or low-cost legal help, and artificial intelligence has lessened the amount of billable hours for grunt work typically performed by entry-level attorneys. Yet, despite all this, the interest in law increased in 2018, and the reason for that is because of the most arguably polarizing president of the United States—Donald Trump.

The number of LSAT takers and law school applications increased in the 2018 admissions cycle, and legal experts said that this renewed interest was from Trump supporters and detractors who were inspired by the president to work in government or to uphold the law.

“We’ve seen significant jumps in both LSAT takers and law school applications over the past admissions cycle, which has fueled speculation about how much impact, if any, the 2016 election and subsequent political climate has had on this year’s law school admissions landscape. We now have an answer: It’s significant. The bump is real,” said Jeff Thomas, executive director of pre-law programs at Kaplan Test Prep. “It’s important to note that law school has long been at the epicenter of politics, with 38 percent of House members and 55 percent of senators holding law degrees. While there are many good reasons for attending law school, our advice remains constant: Be introspective about your reasons for applying, and understand exactly how a law degree is necessary to achieve your career goals.”

Even before the Trump Bump, law school graduates could do numerous other lucrative jobs with their degree besides be an attorney, but the Trump Bump renewed people’s confidence that a J.D. is actually worth its cost long-term.

What problems still exist in the legal world?
The years between the Recession and 2018 saw a crisis in the legal realm, and while it may arguably be over, there are still problems in the industry because of things that happened in those critical years. For law students or potential law students, how will these changes affect you?


Law schools with lax admission standards
Students who attend top-tier schools such as Harvard, Yale, Stanford, and NYU pay a hefty price tag for their degrees, but they are guaranteed prestige and a network of highly-successful alumni. Students who attend well-respected local universities such as University of Texas-Austin or Brigham Young University in Utah also know that their degrees are worth the price and time. However, students with low LSAT scores and poor GPAs are being allowed in numerous other law schools around the country, thinking that a law degree will change their lives; but enrolling in these schools is nothing but a mistake.

Over the past few years, the American Bar Association, which regulates law schools and licensure, has sanctioned numerous schools such as Charlotte Law, Thomas Jefferson School of Law, and Arizona Summit Law School. These schools were criticized for their lax admission standards, and some sanctioned schools even admitted students with LSAT scores as low as 150. Graduates from these sanctioned schools usually were unable to pass the bar exam on their first try, and they often were unable to get full-time employment as lawyers after their first year post-graduation.

The ABA has been fighting hard to stop this practice of what appears to be open enrollment, and many of the sanctioned schools have increased their standards after their notice from the ABA. Unfortunately, for unqualified students who got into law school, they were usually still saddled with debt and wasted time if they attended.

So for anyone considering law school, buyers beware if you do not have high grades or a good LSAT score. While the past may have prevented schools from admitting these students, there are now institutions who will happily accept their money.

Rising tuition costs
Law school graduates lucky enough to snag a BigLaw job after school can earn approximately $160,000-$180,000 for their first year of work, not including a bonus. For everyone else, the salary rate is like the Wild Wild West. It all depends on where you live and how large a law firm you land in.

While first-year salaries vary, the cost of tuition is pretty standard—law students can expect to pay anything from five to six figures for their degree. In 2016, the least expensive law school in the country was the University of Hawaii--Manoa, and it left students with a total average debt of $54,988. In contrast, the most expensive school was the Thomas Jefferson School of Law, which left 90% of its students with an average debt of $172,726. That range from cheapest to most expensive is vast, but the majority of law schools in the US cost in the six-figure range, not the five. With that in mind, students should carefully consider whether or not their law school is worth the price tag.
Median starting salaries for the Class of 2016
Data courtesy of US News and World Report 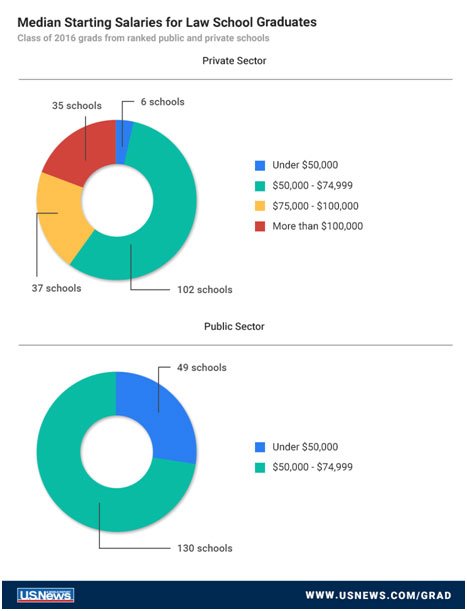 Artificial intelligence replacing duties of entry-level attorneys
There is technology in existence that can scan online legal libraries for research and citation purposes, and this artificial intelligence can do in minutes what used to take human attorneys hours, or even days. There is also software that can prepare simple contracts, and bots that can answer easy legal questions.

This technology concerns critics, who believe AI will take the jobs of paralegals and entry-level attorneys. While this is somewhat true, AI also does not look like it has the capability to replace attorneys’ ability to analyze cases, to work within the legal system (i.e. negotiating cases or representing clients in court), and to calm worried clients’ nerves. Because AI will never be able to replace a quality licensed attorney, anyone who is specialized, great with people, and can create a large book of business is safe in their job security. For people who cannot rise above mediocrity, then the legal industry of the future may not be in their favor.

Lack of full-time employment
Getting the full-time Big Law job is the brass ring for most law school graduates, and going to a top school and getting the best grades is usually what is needed to obtain those coveted positions. But sometimes even getting into the best schools does not guarantee a full-time job, according to Harrison Barnes, CEO of BCG Attorney Search.

What non-legal jobs can people do with a law degree?
Attending a quality law school and earning a J.D. can certainly be worthwhile even if you do not decide to practice law. The network you will create and the skills you will learn such as negotiating deals and analyzing situations are invaluable in any career. For instance, the majority of lawmakers have law degrees; and numerous successful people in journalism, business, and politics are graduates of top law schools.

“In my career spanning more than two decades as an attorney and legal recruiter, I have met an astonishing number of people who have chosen nontraditional legal careers,” Barnes said. “With very, very few exceptions, most of these people are far happier than they ever were practicing law. A good number of these people who left the legal practice also make more money in their new professions.”

“Whether you end up in a legal position or not, your degree (and those three long years) is still a selling point. In fact, in every single one of my post-law jobs, the fact that I had a law degree was an absolute plus,” former public defender Devo Ritter wrote on The Muse. “As you consider making a career change, remember that the prestige is still there; completing law school and passing the bar are both huge accomplishments. There are plenty of objections that you’ll have to face. But take it from me—none are so convincing that they should deter you from pursuing what you really love.”

Like any industry, the law profession has its ups and downs, good and bad. But, it is also a profession that has been around for centuries and is not going anywhere anytime soon. While the 2008 Recession caused a dip in law school interest and a decrease in the number of available high-paying jobs, aspiring lawyers or people who just want to earn J.D.s can still find value in the degree if they attend a quality university.

"I think young people are again thinking, ‘I want to do that [go to law school],’ because they’ve seen how lawyers can make a difference," Kellye Testy, LSAC CEO told U.S. News & World Report.

The Seven Most Underrated Law Schools in the U.S.

The Seven Most Underrated Law Schools in the U.S.