Educational Programs for Becoming a Paralegal

What does it mean to work as a civil litigation attorney

13 Resume Mistakes That Can Cost You The Interview

Why Does The Tool Bit Break Easily In Micro Milling?
< Back To All Articles

Thomas McManus: Dedicated to Helping Other Paralegals Find A Rewarding Career in Law

Share
Tweet
Linkedin
111 Views
( 16 votes, average: 4.1 out of 5)
What do you think about this article? Rate it using the stars above and let us know what you think in the comments below. 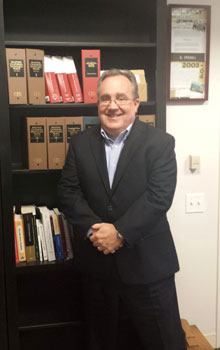 Thomas McManus works as a senior paralegal for DLA Piper

, specifically Chapters 7& 11, which had been a growing area when he entered the legal field. In 2000he changed firms, and changed his focus to white-collar criminal defense and complex litigation. Currently he is at a bit of a crossroads because the partner he worked for at DLA Piper left to become Chief Counsel for the California Public Employees Retirement System. Now most of his white-collar cases are finished and he is only working on complex litigation cases.


Thomas earned an Associate's Degree in Business Management from American River College in 1983. He was a certified bankruptcy assistant for a several years, but he let the certification lapse when he changed his focus to white-collar criminal defense and litigation.

When he was being raised, his father was in the US Air force. He was born on an Air Force base in Japan. When his family left Japan, he moved around a lot. Thomas lived in Kansas City, MO and Livermore, CA. His family settled in Sacramento, CA when his father retired in 1968. He has been married for 28 years and has two daughters that are in their early 20's.

What motivated Thomas to become a paralegal? "I decided to become a paralegal because my brother, who was a lawyer, convinced me to join his firm. I enjoyed working at the firm, and apparently they liked me, as I worked with that group of lawyers for 19 years. These lawyers provided me with a lot room for growth and the rest is history."

Mr. McManus finds juggling everyone else's crises to be the most challenging aspect of his job, because every lawyer's crisis is more important than any other lawyer's crisis. He says that the keys to being a successful paralegal are, "Become invaluable by watching the backs of the lawyers on your team. You should treat the lawyers you work for as your "clients" and you should work hard to get a good understanding of they expect from you. Another key is to watch out for new technologies that can help you do your job better or more efficiently."

The most important lesson that Thomas has learned as a paralegal is, "To stay calm and keep your sense of humor."

Thomas' younger colleagues are amazed at how many people he knows in the Sacramento legal community. He says, "I can't walk down the street without seeing someone I've worked with, against, or on a board with."

Many want to know what the most interesting experience he has had while working as a paralegal. "Unfortunately, the most interesting cases I have worked on were white-collar cases and I can't talk about those. However, I was part of the trial team that got a $30+ million verdict against the Indian tribe that owns the Red Hawk Casino following a three-month jury trial."

Additionally, Thomas has helped represent statewide elected officials, doctors, lawyers, and he filed Merle Haggard's bankruptcy back in the 1990's. A few years ago he uncovered evidence in a government fraud case that helped a client avoid prosecution. The "smoking guns" showed that a rogue employee was the culprit. The employee was prosecuted with the client's cooperation. Thomas will begin trial in March on a $100 million case involving a local country's failure to provide basic emergency health care services to the indigent.

What advice would Thomas give students looking to join the paralegal workforce? "I would advise them to focus their job search on large firms because they expose you to many different areas of law."

What is the best compliment that Thomas has received? "I helped a lawyer I didn't know very well with a trial in Denver. Afterward he wrote in my review that he would "go to war with me." That meant a lot."

Who are the people that have inspired him? "My brother, Judge Michael McManus and Steven Felderstein. They gave me my start in the legal field when I was 20 and they served as mentors to me in my young adult years." Matthew Jacobs, another lawyer who Thomas worked for, showed him the importance of paying attention to the details.

Thomas considers himself a mentor because he often volunteers to mentor other paralegals. He has talked to many people that are considering a paralegal career and he is proud to say that he helped many of them get their first jobs.

Thomas is also a long time competitive youth soccer coach and board member, and he often works with younger coaches who need help running practices or dealing with parents.

Many wonder if Thomas is a member of any professional organizations or volunteer activities. He has been involved in paralegal education for a long time. He taught in the paralegal program at Sacramento's MTI College and has been serving on MTI's advisory board since 1996. He was also on the board of the Sacramento Valley Bankruptcy Forum for a number of years. The forum hosted a large annual educational conference every year.

Mr. McManus believes has been extremely fortunate to work with some of Sacramento's finest lawyers throughout his career and hopes to keep doing so. Many of the lawyers he has worked with have gone on to serve as federal and state court judges.

Summary: Thomas McManus is passionate about being a mentor to soccer coaches and paralegals

I really enjoyed using LawCrossing and the best part about it is the fact that one can search for a job locationwise.
John

LawCrossing Fact #116: We’re cutting edge. A lot of the jobs we post require big-time skills, so we attract some of the most accomplished professionals out there.