By Nabeal Twereet Follow Me on Google+
( 92 votes, average: 5 out of 5)
What do you think about this article? Rate it using the stars above and let us know what you think in the comments below. 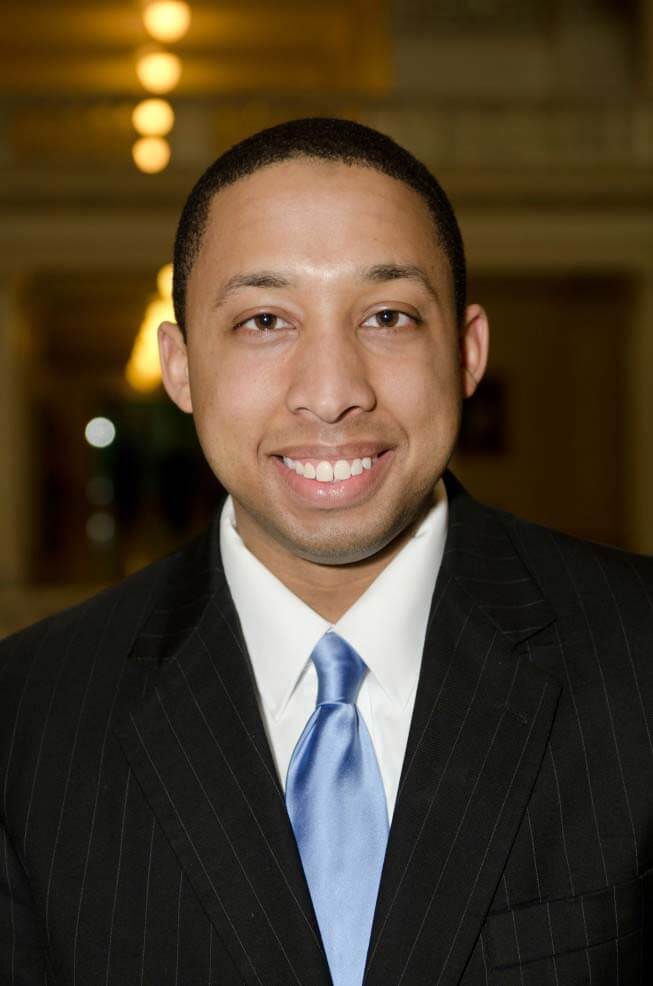 Erick W. Harris is a third year law student at the University of Oklahoma College of Law and anticipates graduating in May 2014. Although Erick has several areas of interest, he plans on practicing energy, corporate, legislative and government relations. He also has an interest in higher education. Erick currently teaches American Government at the University of Central Oklahoma.

He was born and raised in Tulsa, OK. Erick grew up with his mother, father, and brother. He has been married to his wife, LaNita, for a little over a year. The couple enjoys playing with their dog, Lincoln.

Erick graduated with a B.A. in Political Science from Tuskegee University in May 2009. While studying at Tuskegee University, he was a member of the Kappa Alpha Psi, Fraternity, Inc. Erick was the President of the Student Government Association, Judicial Advisor (general counsel) of the Student Government Association, and Sophomore Class President. From February to May 2009, he served as a legislative intern for the Speaker of the Alabama House of Representatives.

Erick is currently an Equal Justice Works National Advisory committee member. He is a member of the Energy Law Association, Black Law Students Association, and is Editor-in-Chief of the Oklahoma Journal of Law and Technology. Erick is also a member of the Phi Delta Phi Legal Fraternity and is on the Dean's List for academic achievement.

In the fall of 2011, he was the moot court competition winner at the Oklahoma City University School of Law. During that same year, Erick was a Calvert Moot Court Competition semi-finalist at the University of Oklahoma College of Law, and he was a state delegate at a party convention.

Since 2013, he has been a legal intern for Oklahoma Gas and Electric Company. Erick conducts research and drafts memoranda discussing regulatory legislation and orders. He has appeared before the Oklahoma Corporation Commission. Erick also evaluates multiple avenues for renewable energy and statutory authorization for such programs.

He is a member of the American Bar Association and is currently working on a project entitled "Whose Recess Is It: Examining Recess Appointments In Modern Times: NLRB v. Canning."

When the Tuskegee University alumnus isn't studying, Erick enjoys swimming, reading, and researching the British monarchy. He is a frequent visitor of Outback Steakhouse. Erick just finished reading J.C. Watts' What Color Is a Conservative.

Erick's Academic Law Career and Plans for the Future

Why did Erick go into the law? "To solve problems and to use my skills and analytical abilities to make someone's situation better than it was."

Erick shared his future aspirations. "I hope to become a successful businessman, attorney, and public servant."

When asked about his key accomplishments, he claimed, "Completing two degrees by age 25 and teaching at the collegiate level."

Erick talked about his main strengths and skills that he is planning on using to further his career goals. "I am a decent public speaker and I have community relations skills."

As for his weakness, he acknowledged, "I take on too many assignments."

Law school can sometimes be stressful, so Erick shared what he does to relieve stress. "I take a nice brisk walk outside, go swimming, or play with my dog."

How does Erick handle new assignments? "I analyze the problem, determine if there have been previous attempts to rectify. I then draft possible solutions and consider any cons to implementation."

Where does he derive his confidence? "From my faith."

Three Wishes to Live By, Public Service, Coping with Fear and Great Achievements

If Erick had three wishes, what would he wish for? "1) I would end poverty. 2) I would like the U.S. to maintain its top position in the global sphere. 3) I hope people are able to achieve their goals."

What is his top priority outside of work? "My top priority is public service. I love helping my community and people any way I can."

In regards to handling fear, Erick asserted, "I tackle it head on."

Is there any particular achievement or activity he would like to share with our readers? "Since 2010, I thoroughly enjoy participating in Oklahoma City's 'Make A Will Workshop' which is sponsored by Legal Aid Services of Oklahoma. The goal of the workshop is to increase the amount of minorities that complete estate planning documents."

Erick was involved in a study abroad program. He recalled, "In the summer of 2009, I participated in a study abroad program in Israel sponsored by the American Israel Public Affairs Committee. It was a great experience that allowed me to learn about another country's culture, political issues, and social issues." Erick continued to say that he spent two weeks in Israel. Some of the historical sites he visited included Tel Aviv, Jerusalem, Galilee, and The Dead Sea. Erick also met with members of the Knesset, Israel's legislative body. He added, "My trip to Israel helped me to better understand the issues the Middle East is dealing with today."

"Since 2013, I have been involved with the American Lung Association Oklahoma City Leadership Board. Additionally, I serve as a member of the Board of Advocates for the Stephenson Cancer Center located at the University of Oklahoma Health Sciences Center.

I have also participated in the Legal Aid Services of Oklahoma since 2010. I coordinate my church's participation in the workshop."

What is Erick's personal philosophy? "Hard work and perseverance make all the difference."

The future attorney talked about what he believes holds more truth in light of his personal philosophy. Was it fate or choice? "Choice. Everyone has to choose what path they pursue."

Erick has been to Israel, but what other destinations has he explored? "I have been to Costa Rica, Nicaragua, Canada, and Jamaica."

Erick's favorite quote can be found in Hebrews 11:1. "Now faith is the substance of things hoped for, the evidence of things not seen." He said the quote resonates with him because he is a Christian. "Having faith is a very important part of my life."

Is there anything else you care to share professionally or personally? "I am a hard worker who will constantly strive to succeed in anything that I do."