Share
Tweet
Linkedin
1 Views
( 1 vote, average: 2 out of 5)
What do you think about this article? Rate it using the stars above and let us know what you think in the comments below. 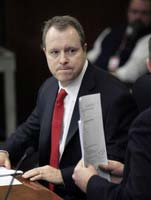 Cook County Attorney Tim Scannell was charged on Thursday with two counts of fourth degree criminal sexual conduct over an alleged relationship with a 17-year-old. The case is tricky, because even though the age of sexual consent in Minnesota is 16, Scannell has been charged due to him being in a position of authority and being more than four years older than her. The indictment was returned by a grand jury on October 22.

Scannell will be appearing in court on Nov 12 in the matter.


Scannell requested all judges in the Sixth Judicial District to rescue them from the case as they have previously worked with him.

The allegedly inappropriate relationship was revealed when the family of the girl filed a restraining order against Scannell in December 2012. According to that petition Scannell was a friend, coach, mentor and volunteer to the family and the victim. He gave guitar lessons to the girl and also coached her in a summer tennis program.

Following the restraining order, which remains in effect until December 2014, Cook County Sheriff Mark Falk requested a BCA investigation of Scannell. After the investigation, Heffelfinger was appointed as a special prosecutor on the case.

Things seem to be going bad for Schanell since a while. In December 2012 Schanell was shot by a man whom he had prosecuted, and who had been convicted for criminal sexual conduct with a teenage girl. He was shot once below the heart and twice in the thigh.

Thanks for LawCrossing! I just started using it today and already I feel better about where my job search is headed.
Ely

LawCrossing Fact #162: Our “Date Last Verified” information lets you know when the job posting was last updated, giving you a feel for what’s out there and how new it is.