Share
Tweet
Linkedin
868 Views
( 113 votes, average: 5 out of 5)
What do you think about this article? Rate it using the stars above and let us know what you think in the comments below.
The coffee's fresh, the computers are humming, and it doesn't rain as much as you think (well, maybe it does). 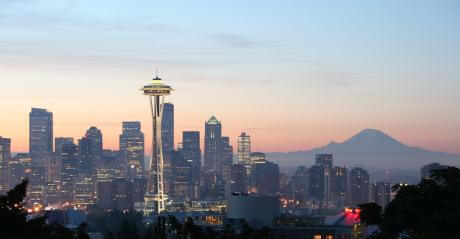 Grunge rock, coffee, Amazon and Microsoft. In the minds of most non-Washingtonians, there's little more to Seattle than that trio of attractions. But over three million people live in or around the city, and not all of them spend their afternoons sipping Kenyan AA. (A lot, but not all). Some stereotypes are also kind of true: The coffee is without parallel, cutting-edge music is everywhere, and plenty of technology companies do keep the city's lawyers busy. But there's one Seattle cliché that's a little off: the rain. As a matter of fact, New York City sees more each year. And seeing that lawyers in the Big Apple don't have the natural wonders of Mount Rainier and Puget Sound constantly luring them out of the office, it all works out.

Head to the $360 million Seahawks Stadium to catch some NFL action (and eat some Vietnamese food from the concession stand). If it's indie rock you’re looking for, Crocodile Cafe and The Showbox feature many underground sensations. Experience Music Project, the brainchild of Microsoft co-founder Paul Allen, is a Frank Gehry-designed museum that bows down to all things musical.

Treat your best clients to the suckling pig with chorizo, clams, smoked paprika, and pickled onions at Belltown's swank Brasa (who knew you could smoke paprika?). The Pike Place Market area's Fire & Ice, meanwhile, is where Seattle's stylish set goes to see, be seen, and eat.

The Red Door used to be a biker bar, but after a recent ownership change, these days the leather you see is more Prada than Harley. Baltic Room's mohair booths, cherry-paneled bar and interior, and red-Lucite tables are reminiscent of a '50s cocktail lounge. The large martinis mixed up at Tini Bigs, on lower Queen Anne Hill, are the reason many Seattle residents drink coffee in the morning.

About that java: Seattle is home to the ubiquitous Starbucks, of course, but also to countless independent coffeehouses. Torrefazione Italia, in Pioneer Square, brews Italian-style blends. Uptown Espresso is said to make the best latte in the city (we tend to agree). For art, cinema, and a good old cuppa first-rate joe, go to Zeitgeist.

You'll have your estate near Gates's in Medina when you're running the firm someday, but in the meantime we recommend a loft, condo, or bungalow in Capitol Hill. Junior associates flock to Belltown, which is within walking and biking distance from the offices of many major firms. Homes with Lake Washington views in the emerging Mount Baker/Seward Park areas can be affordable to associates.

Pike Place Market, one of the country's oldest continuously operating farmer's market, is also where you'll find Seattle's world-famous (really, they are) flinging fishmongers. Browse more than 150,000 new and used titles at Elliott Bay Book Company, a Pioneer Square institution. Equip yourself for hiking, camping, and bicycling at REI's flagship store, where you can practice rappelling on the 65-foot indoor climbing wall.

Perkins Coie, one of the largest firms in the Pacific Northwest, counts Amazon, Yahoo!, Starbucks, and Boeing among its clients, and it's not a bad place to work. The firm's Happiness Committee helps employees achieve a good work/life balance.

It stands to reason that Microsoft is a big K& L Gates client – Bill Gates II (yep, "Dad"), now retired, was one of the firm's founding partners (before its merger). Stoel Rives has built sizeable environmental, litigation, and labor and employment law practices during its 100+-year history in Seattle. Rather go in house? Take your pick: Microsoft, Starbucks, Amazon, Adobe, and Real Networks all are headquartered here.

On LawCrossing I found certain positions not found on any other site. It is a great site and I loved using its services.
Karen