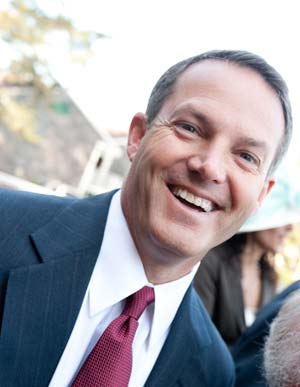 Scott was born in Washington D.C., and raised in the Chicago area. He graduated with an A.B. from Stanford University and earned his J.D. from The University of Chicago Law School. Scott is married and has three children. His oldest son will be attending University of Michigan in the fall of 2013.

When Scott isn't working, he enjoys the outdoors, biking, and playing tennis. Scott is a long-suffering Chicago Cubs fan who now also happily roots for the San Francisco Giants and all of Stanford's teams. He is a frequent visitor to Zachary's Chicago Pizza restaurant in Berkeley, CA. Scott's favorite book is Joseph Heller's Catch-22 and he is currently reading Adam Johnson's The Orphan Master's Son.

Does Scott have a top memory from school? He doesn't have one top memory but the friends he made during his years at Stanford University remain his best friends to this day. He also took a class taught by Condoleezza Rice on U.S. - Soviet National Security Policy and attended, in red face paint and red fireman's underwear, the 1982 "Big Game" between Stanford and the University of California made forever famous by "The Play," in which Cal scored the game-winning touchdown with five laterals as time expired while the Stanford band stormed the field.

Did Scott receive any awards, scholarships or honors at school? The recruiter jokingly said, "I was voted "Best Personality" and "Optimist" in eighth grade." Scott noted that a legal recruiter needs both qualities in order to become successful.

What motivated the businessman to work as a legal recruiter? Scott admitted he was an unhappy attorney. After he spoke with a legal recruiter regarding a lawyer position, he realized recruiting suited his matchmaking personality. (He had already been responsible for three marriages.) Scott then met with the recruiter who offered him a position with the company.

Scott discussed what he is known for professionally. "I am very well connected in Silicon Valley. I create long term relationships with candidates and clients and make placements that fit and last for both sides."

He also discussed his strengths and one weakness as a recruiter. Scott acknowledged that he has an ability to connect with individuals. After understanding his candidates' goals, the recruiter can place candidates with the right clients. As for his weakness, Scott is working on becoming a better manager and effectively directing people to do tasks.

So what is Scott's advice to new recruiters? "You have to be focused and fearless. Recruiters have to be out in the legal community and know lawyers. Your goal should be to send two resumes out each day."

What does Scott look for to find the right fit? What makes a great candidate? He said he likes to meet with his clients so he can get a good idea of what the legal culture is like at their firm or company.

In regards to what makes a great candidate, Scott asserted that the best candidate have a combination of excellent credentials, experience and personality.

How does the businessman process fear? "We are in a business that is contingent. I have eighteen years experience as a legal recruiter and I have to make things happen by calling and meeting with candidates and clients. Sometime fear motivates you. If you have a bad day, you just have to work harder tomorrow."

How does Scott tackle obstacles? "I take a break and I exercise. Then I come back and solve the problem."

Has Scott learned something of value from his mistakes? The recruiter quipped, "I wish. I am a slow learner, but I try not to make the same mistakes over and over again."

Where does Scott derive his confidence? "I feel comfortable interacting with people and advising people. I also believe I derive my confidence from growing up in a stable family with my parents and two brothers."

Scott is a member of the National Association of Legal Search Consultants (NALSC), an organization of legal recruiters that adheres to the highest ethical standards in the profession.

Has Scott faced any obstacles in his life? "I wasn't happy with my career, but I persevered and I found something I really enjoy." The recruiter also faced adversity when his wife's water broke while she was pregnant with their son. Scott's wife remained in the hospital for three months and the couple thought they were going to lose their son. Happily, he was born healthy and is now a sophomore in high school.

Scott has mentored several legal recruiters. He is currently mentoring Liz Stone, Managing Director at The Dubin Group. She placed two attorneys in her first two months with The Dubin Group.

What is the recruiter passionate about? Scott explained that he active with environmental organizations and groups that advocate for gun control and Israel.

Motivation and a Rewarding Position

What motivates Scott to be a recruiter every day? "I feel a genuine obligation to my candidates and clients. I won't stop until I find a good attorney for my client." The recruiter also pointed out that earning a good living motivates him to make good placements.

Why does the Stanford University alumnus find his position rewarding? He said he enjoys making placements and talking to people everyday. Scott also likes to control his own schedule.

What to Expect When Working with Scott

What can you expect when you are working with Scott? Patrick Reutens, a former General Counsel at Atmel Corp stated:

"Scott is very energetic, proactive and efficient. He takes the time to understand the requirements of each position before setting out on a search for talent.

Scott's not just sorting through a drawer full of resumes to find a match for a position. He makes cold calls and takes other innovative steps to locate lawyers that will match a firm's needs. He always finds candidates with excellent qualifications.

Scott is easy to deal with and very professional in everything he does. It was a pleasure to introduce him to my firm. I would definitely use Scott again to fill any future legal vacancies."

"I have used Scott to find positions for myself, and I have used him as a recruiter for the top companies for which I have worked. He is a great resource on both sides of the recruiting table.

Scott's candidates never go into an interview blind. When he's on your side, you are well prepared. He educates himself and his candidates about what each firm or company expects, so there are no surprises.

Dubin Group does the leg work needed to ensure that great matches occur. Unlike some recruiters who send over every resume they receive, Scott and his team screen all resumes carefully before their client companies ever see them. It makes for a very positive and efficient legal recruiting environment.

Scott is always honest about the culture of the firms he is recruiting for. He won't send you to a company where you won't fit or will be uncomfortable. Scott always gave me the lay of the land during each of the several career transitions I worked with him on."

"Scott and the Dubin Group found us fantastic candidates with precisely the pedigrees and experiences we were looking for. Scott consistently understands exactly what we need and finds the right lawyers for our vacancies.

Scott has worked with me on three different searches, all of which went splendidly. His approach is collaborative and the results are truly impressive.

Dubin Group has access to a deep pool of highly qualified people. They have a tremendous ability to leverage our feedback, because they truly listen to what we have to say and clearly value our views."

Scott does more than send us candidates who look good on paper. He has a gift for finding people who can do the work that needs to be done."