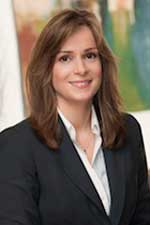 Jenice L. Malecki is a securities attorney and founder of Malecki Law, her Manhattan, NY based law firm. She has been a FINRA arbitrator and Chairperson. For the past twenty-two years, Jenice has built a national reputation as a litigator who handles securities litigation, arbitration and regulation, commercial litigation, securities and high-level executive employment issues and real estate investments. She is well known for taking on regulatory matters before the SEC and FINRA, as well as employment and whistleblower disputes.

Jenice began her legal career as a securities attorney, litigating notable class action cases such as In re Crazy Eddie in the counsel’s office of the lead plaintiffs. During the 1990s, she represented several broker dealers and was very influential in monitoring issues against prominent “boiler room” stock fraud of the decade. Some of Jenice’s Manhattan employment law and New York securities arbitration cases have involved eminent clients, which includes baseball player Rodney Beck, “Dot Com” experts such as both founders of Activision-Blizzard, the founder of Fairway and Fresh Direct, the family of the founder of old-line brokerage investment firm, and whistleblowers like Eric Kolchinsky and Arturo Clifuentes. She has also represented legendary inventor William Faenza, famous artists like teen vocalist Tevin Campbell, jazz flutist Bobbie Humphrey, New York dance company Dura Mater and New York playwright Tony Sokol.

In addition to her securities practice, Jenice often represents individuals interested in selling or purchasing real estate. She represents clients throughout the construction, refinancing and mortgage process. The top-notch litigator frequently deals with several banks, sponsors and developers. Jenice has experience working with businesses, managers and owners in the commercial and residential purchasing, leasing, managing and selling of real estate, which includes contractual negotiations with contractors, unions, employees, vendors and others.

Jenice was on the Board of Managers of a Williamsburg, Brooklyn Condominium for nearly one year and she had the opportunity to serve on the Board of Directors of an innovative Gramercy Park cooperative apartment building for almost five years. She helped the Gramercy Park Building avoid foreclosure by assisting the cooperative complete a multi-million dollar mortgage refinance. Jenice was also involved in significant negotiations and collection efforts with the financiers and sponsors and she was successful in creating new areas of revenue. In addition to setting building policies, she frequently worked with contractors and architects in important renovations and landmark matters.

Although the New York City Police Department came under scrutiny in 1999, Jenice devoted three months to working with the City of New York and its law enforcement officers so she could handle litigation and publicity matters concerning police misconduct cases.

Over the years, Jenice has been awarded with several distinctions. She has long maintained an “AV” (pre-eminent) Martindale-Hubbell rating, which is the highest rating presented to any individual lawyer. In 2012, she was designated as Top Attorney by Super Lawyers and the National Law Journal. Jenice has been featured in the National Law Journal, New York Magazine, New York Times Magazine and many other publications. The securities attorney and her cases have been and continue to be cited in various industry publications, which includes Newsweek, The New York Times Forbes and The Wall Street Journal. In 2013, The Wall Street Journal will exhibit Jenice in an educational video discussing the arbitration process at FINRA.

Jenice is a member of the New York State Bar Association. She has been a member of the Securities and Exchanges Committee at the New York City Bar Association and is a member of and has been on the Board of Directors of the Public Investors Arbitration Bar Association (PIABA). In addition to speaking yearly at PIABA’s conference, Jenice has spoken on several panels at the New York County Lawyers Association and Practicing Law Institute (PLI), and at both New York Law School and Brooklyn Law School. She has appeared on Bloomberg Television, ABC Eyewitness News, EBR TV, China TV and on other syndicated networks and shows. She also has been a guest on Steve Forbes’ radio show, “America’s Most Influential Women in Government, Technology, Business, and the Law,” as well as several other syndicated radio programs.

She has volunteered with the New York City Board of Education and the Legal Aid Society. For over thirty years, she has acted, written and directed for Community Theatre, Off-Broadway, and Off-Off-Broadway. Jenice is an advocate of the labyrinth Theater Company, with admired members Philip Seymour Hoffman, Eric Bogosian, John Patrick Shanley, John Ortiz, Stephen Adly Guirgis, David Zayas, Sam Rockwell and others. The accomplished actress has appeared in internationally award-winning independent and short films. Jenice has acted as lead vocals in recorded and live performances of ALL Too Human, a poetic band. She also has written, produced and directed short plays and short films, which have appeared in festivals in New York City.

What are Jenice’s hobbies? What are her favorite sports teams? She replied, “I am interested in theatre and music, not really sports. I follow and support the Labyrinth Theater Company with company members like Philip Seymour Hoffman, John Ortiz, Eric Bogosian, Stephen Adly Guirgis, John Patrick Shanley, Sam Rockwell, David Zayas and others.”

The New Yorker was asked if she received any awards or participated in any internship that influenced her decision to go into the law? Jenice said, “I was in a joint BA/JD program at Manhattanville College, so I actually got law school credits when in college. While at college, I interned at the Legal Aid Society and a large law firm: Curtis, Mallet, Prevost, Colt & Mosle in NYC.”

When asked if she could tell us about her most memorable law school experience, Jenice recalled the following experience: “I took a trial advocacy class and we tried a case before a jury of junior high school students. At the end of the case, they would find for one of the parties and you could discuss with them why they found the way they did. I remember my jury told me that they ‘really believed that I believed in my client,’ who was imaginary. At that moment, I understood the value of my theatre background!”

Jenice discussed why she became an attorney. “I really wanted to help battered women, but couldn’t get a public interest job, which was very competitive at the time. I was a big theatre person and I liked the ‘theatre’ quality of litigating cases through trial or hearing.”

The Manhattanville college alumna also discussed her own practice and expressed what the best part of her job is. “I run a small practice of three full time lawyers, one ‘of counsel’ and staff. The best parts of my job are helping victims of fraud recover money and watching my associates grow and develop into excellent litigators.”

What is Jenice known for professionally? “I am really a trial attorney and I think I am best known for my trial skills. Although many cases do settle, we try those where we think the proffered settlement would not be fair and we are not afraid to do it!”

In regards to her strength and weakness, she acknowledged, “My strength is in my attention to detail, my weakness is feeling so personally about what happens in my cases.”

So what does Jenice think about the legal field today? What would she change about it? Jenice claimed:


“I would require attorneys to stipulate more on facts that are not in dispute and find better ways to present evidence that is not duplicative. I also think lawyers need to exhibit higher levels of professionalism, in terms of the way they interact with each other. We can be adversaries and represent our clients zealously, without being adversarial in our dealings with one another.”


If she weren’t a lawyer, what would Jenice probably be doing? The actress stated, “Something with theatre, music, or possibly art/filmmaking.”

The securities attorney was asked where she sees herself in five years’ time? “I hope to be doing what I am doing with my team handling more and more responsibility of their own, while helping influence the laws and rules in the securities industry to protect victims of securities fraud.”

What motivates Jenice to be an attorney everyday? “Helping people where they thought there was no hope, getting them some semblance of justice.”

How does Jenice want to be remembered? “As someone who worked hard for people that trusted me and that I left no stone unturned.”

Jenice’s securities experience began in class action litigation, having worked on the famed class action case In re Crazy Eddie in the counsel’s office of the lead plaintiffs. What did she learn from this experience? “I run a small office with three partners. I learned that you don’t have to be a big firm to handle big cases. We receive a lot of press. I also learned about accounting fraud.”

Throughout the 1990s, Jenice represented numerous broker dealers and was instrumental in regulatory matters against well-know “boiler room” stock fraud of the era. How was this experience? “Eye-opening. I represented people accused of doing things the wrong way. They were accused of violating the rules. I also conducted mocked audits. I learned a lot of security laws by doing this.”

What got the securities attorney interested in real estate? “I personally invest in real estate. Since I work in security fraud area, I don’t have confidence in the market. So I go for something tangible.”

Jenice has acted, written and directed for Community Theatre, Off-Broadway, and Off-Off-Broadway for thirty years. What got her interested in acting? “I have been acting since I was eight years old; it’s something I’ve always done.”

The actress has appeared in internationally recognized award-winning independent and short films and has acted as lead vocals in recorded and live performances of ALL Too Human, a lyrical band. Why did Jenice decide to become an attorney instead of an actor? “Finances. I thought I could earn a living and use my presentation skills as an attorney.”

Jenice’s Mentor and Mentoring Others, Pro Bono Work and Vision for the Future


“I think that everywhere I worked I had a mentor of one kind or another. Everywhere I worked, someone taught me some valuable lessons. At work, my employees have felt the same about me, but I did formally mentor an immigrant high school student from Africa. I was at his graduation; he went to college and both served in the military and started a great career. It was very fulfilling to do that.”


Does Jenice handle pro bono work? “The mentoring I discussed was volunteer work. We frequently counsel victims with small cases that we cannot take on how to get help and what to do.”

Jenice shared her vision for the future. “I would like to propose some stronger litigation to help Ponzi victims and teach America how to avoid investor and consumer-related fraud.”