( 105 votes, average: 4 out of 5)
What do you think about this article? Rate it using the stars above and let us know what you think in the comments below.
The large law firms, located in large cities, are departmentalized with a partner in charge of each specialty. In firms over sixty attorneys, there are usually departments for litigation, labor law, real estate, corporate, tax, and trusts and estates, etc.

Sometimes a matter received in one department will need the assistance of another department. An example of this might be a labor law matter which requires litigation. Both the labor and litigation departments would work jointly on the case. 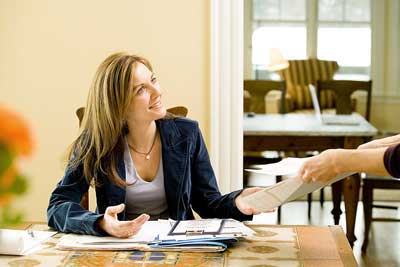 A litigation paralegal would have to be trained in-house in labor law in order to work effectively on the matter. The clients of large law firms are generally corporations, banks, insurance companies, and brokerage houses. The firm can also serve the needs of individuals seeking legal assistance in real estate, tax, and estate matters.

Three or four paralegals will usually share an office and the services of a typist. The tasks performed by a paralegal in a large firm can be routine and very systemized. Many law cases involve a voluminous number of documents, and it is a paralegal who will catalog, index, and summarize them.

In nearly all of the large firms, paralegals will be supervised by the more experienced attorneys and paralegals, since the inexperienced associate will not know the kinds of tasks that can be routinely assigned to the paralegal.

Paralegals in these corporate firms will generally not perform legal research in the law library. Many of these firms, however, have computerized legal research equipment. A paralegal may be trained to operate it and in this instance, a paralegal will assist in legal research.

The large law firms will usually treat their paralegals as professionals, including them in the firm's social functions. The paralegals are expected to attend department meetings and accompany attorneys to depositions and court. They are also expected to work overtime and travel as a case may demand.

There are distinct advantages in working as a paralegal in a large law firm. You will receive excellent benefits, including insurance, health, and three to four weeks paid vacation a year. You will become exposed to a wide variety of corporate clients and their businesses. Not only will you become familiar with the kinds of law the firm practices, but you will be making contacts that might be useful if you should wish to leave the firm after a few years.

In 1999 Mitchell B. graduated from college with a Bachelor of Science degree in management science. In his senior year of college he took both the business and law boards, did well in both of them and remained undecided on whether to attend law school or graduate business school.

Since he had previously worked one summer in a business setting, he decided to look for a job as a paralegal to help him decide which kind of graduate training he would prefer. Without a certificate from a paralegal training program, he found it very difficult to even get an interview for a legal position.

He hand delivered over 100 resumes to law firms before he was asked in for one interview. He realized that it was going to take a lot of perseverance and time to eventually land a paralegal job. While he continued to send out resumes, he paid a visit to an employment agency which specialized in placing legal assistants in both temporary and permanent paralegal jobs.

Although he lacked the paralegal education, the employment agency found him a temporary paralegal position in a major Wall Street law firm. One of the firm's clients was involved in antitrust litigation and there was a need to hire more non-lawyers to analyze the thousands of documents. The position would remain open indefinitely since it was uncertain if the case would be settled or go to trial.

Mitchell began to work at the law firm in November 1999 at the rate of $15.00 an hour. His salary was paid by the employment agency since the law firm had contracted through the agency for his services.

A few weeks later one of Mitchell's resumes resulted in an interview at another law firm in New York City. He was offered a job on the spot. When he told the Wall Street firm of this offer, he was offered the same salary as that offered by the other firm and a permanent job. He accepted this job offer since he enjoyed working at the firm. His salary was $210 a week.

As a temporary paralegal, he had not been given much background information about the antitrust case. As a permanent paralegal he was given three days' worth of files to read in order to familiarize himself with the case. At this point in the case, the firm had already gone through discovery of 27,000 documents.

For the first six weeks as a permanent paralegal he analyzed and summarized documents with the other ten paralegals hired to work on the case. The law firm had a team approach when working on a major case, and grouped paralegals and attorneys together to work on designated portions of the case. The other thirty-five paralegals in the firm worked on other litigation matters and in the real estate and corporate departments.

In addition to analyzing and summarizing documents, Mitchell also analyzed depositions, writing factual memoranda on the contracts, preparing exhibits for depositions, and attending depositions. The work atmosphere was comfortable and informal, with everyone on a first-name basis. Mitchell shared an office with three other paralegals, had his own desk, phone extension, and his name on the door.

Like the other paralegals he had the services of the stenography pool and duplicating department. With a major case such as this one, paralegals did not have a regular nine to five work day. Mitchell frequently worked seventy hours a week. He worked regularly six days a week and some¬ times on Sundays. He was paid overtime for this.

In January 2000, Mitchell and his team were sent to Los Angeles to take depositions for the case. His air transportation, accommodations, and meals were all "first class," but this was not a vacation; he worked around the clock. He assisted attorneys in preparing for the depositions and digested the deposition to transcripts as they were taken. Upon his return from California, Mitchell had decided that he wanted to become an attorney. He was accepted at a national law school for the Fall of 2000.

At law school he found that his paralegal training and work experience gave him a good foundation and introduction to law. Also, as a law student he found himself under pressure to complete assignments with deadlines; the work at the law firm had prepared him for this.

In October of his first year at law school he secured a position for the following summer as a first-year law associate at a small New York City law firm. Attaining a law job as a first-year law student is rare, and Mitchell attributed it to the fact that he had had nearly a year’s experience working on a major litigation.

In his second year of law school Mitchell entered a writing competition for the Urban Law Journal. His writing abilities were judged to be excellent and he was made an editor on the Journal. After publishing a student article, he was selected to become the Editor-in-Chief of the law journal which gave him a full scholarship to pay for his last year of law school.

He was given this honor based on his work performance on the journal, his management background from college, and his work experiences at the two law firms. While a second-year law student, he also worked as a Federal Judicial Intern for a United States District Court Judge. With this experience and his private law firm experience Mitchell has been exposed to both the private law firm setting and the public law sector. Mitchell feels that his career path was definitely influenced by his paralegal experience.

A Legal Career is Still Good for a Bright Future

A Legal Career is Still Good for a Bright Future