What If You Get Rejected At Law Schools

( 457 votes, average: 4 out of 5)
What do you think about this article? Rate it using the stars above and let us know what you think in the comments below.
If you've been able to apply under an accelerated admissions program, you should know the results within six weeks. Your other admissions and rejections will trickle in throughout the winter. The old high school guidance counselor's principle that a thin envelope indicates a rejection and a fat envelope indicates an acceptance remains generally true, but there are exceptions. Even acceptances sometimes come in thin envelopes nowadays; a packet of registration forms and leaflets may be sent separately. You should know the fate of all your applications by the first of April. 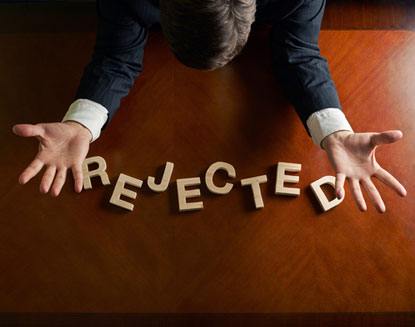 But what if you weren't?

It could happen. The future is never entirely controllable. Perhaps you ran into a bad placement year. When law schools receive an unexpectedly large number of applications, they raise their standards. Candidates who may have been admitted in other years are rejected. Or perhaps your record was not as good as you thought it was.

Instead of being rejected outright, you may be notified that you've been placed on a waiting list. You will be offered admission only if other previously accepted candidates decide not to attend.

Being on a waiting list is a nightmare. You will be dangling, unable to make firm plans, well into the spring, and perhaps the summer. You'll hear stories about applicants admitted from waiting lists a few days before fall classes were to begin. At least some of these stories are true. But these late admittees are fortunate compared to wait-listed applicants who are never admitted and who wind up at the end of the summer without alternative employment.

For this reason, you should accept waiting list status only if you have no other options-only, which is, if all your other schools turned you down- or if the school you're wait-listed at is far superior in status to any school that has accepted you. Otherwise, write to the law school, announce that you will attend another law school, and politely ask to have your name taken off the waiting list.

If you must sweat it out, you should at least try to gauge your chances. Most law schools rank the candidates on their waiting lists and will give you some indication of where you stand if you call or visit. (Some law schools include your ranking in the letter they write to tell you that you have been wait-listed.) If you are ranked near the top of a waiting list at a Group IV or Group V school, you can feel fairly optimistic about your chance of eventual acceptance. Your prelaw adviser may have information about how wait-listed applicants at this school fared in previous years. If you're placed low on the waiting list, if the prelaw adviser gently discourages you, or if you are dealing with one of the law schools that explicitly refuses to disclose any information about the status of wait-listed applicants, you had best make other plans.

You should also ask about a conditional admission. In a sense, almost all law school admissions are conditional; they require you to complete your undergraduate work before you will be allowed to begin your legal studies. Some law schools occasionally offer admission with a more extensive set of conditions attached. In recent years, some foreign students have been admitted contingent on their ability to regularize their residency status.

A few law schools make admission, or a reconsideration of a rejection, contingent on completing some specific work. Widener University, for example, has a summer "Trial Admission Program" for students who were not admitted outright but "who show promise of success in law studies despite a relatively low score on one of the two principal measures used for admission." Some other law schools, especially those with evening or part-time divisions, have similar programs.

(Some law schools, while rejecting your application for their day programs, may offer to consider you for their evening divisions.) If you've been rejected from such a school, you can call and ask to be put on the list for a probationary enrollment. The programs usually involve registering for and taking law school classes during the summer session. Alternatively, some allow you to attend regular semester classes on a probationary status for a limited period of time. If you do well, you've demonstrated that you are able to do law school work.

No summer program, to my knowledge, guarantees you admission to the degree-granting legal program. Instead, without making any commitments, the law school indicates its intent to admit the most successful candidates on a space- available basis. You can consider it to be the equivalent of earning a spot on the waiting list. Your fate will eventually depend as much on what previously admitted applicants decide to do as on your own satisfactory summer performance. But if you want to go to law school, it may be better than nothing.

But don't give up just yet. If you've been rejected by your insurance schools-that is, schools at which your numbers should have been adequate to secure admission-or if friends and associates whose records are similar to your own seem to have done better, a mistake may have been made. Call the law school (or schools), explain the circumstances, and ask for an explanation.

In effect, you are demanding a recount. Each law school has a procedure for providing explanations. You may be able to ask for information on the telephone. More commonly, you will be required to put your request in writing, addressed to a dean or to the admissions committee. Be sure to include your GPA and LSAT numbers in your petition. Erroneous rejections are sometimes traced to some clerical or typographical error that attached the wrong numbers to the rejected candidate's application. The admissions committee will review your file; it may discover that a mistake has been made.

The admissions committee may decide that the mistake was yours, arguing that you were rejected because your file was not complete. In this case, ask what pieces of information were omitted. If the law school claims not to have received something beyond your control, like a letter of recommendation, you can then argue that the missing information was actually sent and lost by the law school, or you can protest that you weren't notified of the incompleteness in a timely fashion.

If you make a good case that you are being harmed because of something that is not your fault, the law school may offer to reconsider your application. Although it doesn't happen often, law schools sometimes offer admission to previously rejected candidates. Alternatively, they may offer conditional admission or waiting list status.

In most cases, however, an appeal does not result in a change of status. The admissions committee or dean may simply write back that your qualifications were not good enough. They may compare your numbers to the average numbers of the successful applicants. Or they may provide a more detailed explanation.

If you can't secure conditional or probationary admission and can't get in from a waiting list, you'll have to reevaluate your options. You'll need to determine if you have a chance to be admitted if you apply again or if your record is so poor that you are unlikely ever to be a serious candidate. Your prelaw adviser can evaluate your record and make suggestions. You should consider a second cycle of applications if your adviser determines that you You'll need to wait a year, make a new application list, and go through the whole procedure again. During the second cycle, you can avoid repeating any mistakes you made the first time.

You needn't fear that law schools will be prejudiced against you if you apply again. As have been mentioned above, it's quite common for applicants to do other things before finally settling on law school. Many successful applicants have been out of school for some time before beginning their legal studies. Some have gone through three or four application cycles.

To maximize your chances of acceptance, you should use the eight months or more between your initial rejections and your second applications to make your record more attractive. You can increase the likelihood that a law school will perceive you as a uniquely valuable candidate by securing useful work experience. Spending a year working on a political campaign, at temporary government employment, on a hitch in the Peace Corps, or in political party or charity work are among the available options. Paralegal training followed by a period of employment at a law firm will allow you to claim greater familiarity with legal subject matter. In my experience, all have contributed to second-cycle success stories in previous years.

Perhaps the easiest way to improve your application status is to go to graduate school for a year or more. You'll have the opportunity to study some subject related to law (public administration, for example) and to improve your grades. In general, it's easier to make good grades in graduate school than it is in an undergraduate program. (The LSDAS does not include graduate work in its calculation of index numbers, but it forwards graduate transcripts to law schools along with undergraduate transcripts.) If you do well in a graduate program that is part of a joint-degree program with a law school, you may be able to convince the associated law school to offer you at least provisional admittance.