By Google+, Follow Me on
What do you think about this article? Rate it using the stars above and let us know what you think in the comments below. 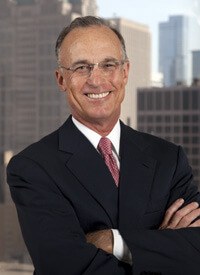 Patrick G. Burns is a founding shareholder at Greer, Burns, & Crain in Chicago. GBC started twenty years ago with four lawyers and a patent agent. Today, the firm has over twenty lawyers and three agents.


"We successfully represented the defendants in London v. Carson, which was an important doctrine of equivalents case at the time. As a result of that case, I was invited to join the panel in a seminar for the Patent Resources Group entitled "'Designing Around' Valid U.S. Patents." Every aspect of patent infringement is discussed in this seminar, with cookbooks on how to construe patent claims and how to analyze equivalents.


His patent prosecution docket has exceeded 1,000 pending applications at times, prosecuted by Mr. Burns and an excellent group of attorneys and staff. Several of his clients' patents have been litigated, and some have been licensed for millions of dollars.

Mr. Burns is active within the intellectual property legal community. He is a past President of the Intellectual Property Law Association of Chicago, has served as Chairman of its Computer Technology Committee, and was on its Board of Managers. Mr. Burns is also a past Chairman of the Patent, Trademark and Copyright Committee of the Chicago Bar Association. Additionally, he has been involved in bar association activities during his career.

Over the years, Mr. Burns has been awarded several distinctions. In 2009, Mr. Burns earned a Distinguished Alumni Award from the Chicago-Kent IP Law Society and he received an Alumni of Distinction Award in 2013. Since 1984, he has held an "AV" (pre-eminent) Martindale-Hubbell rating, which is the highest rating presented to any individual lawyer. Mr. Burns was named an Illinois Super Lawyer by Law & Politics Magazine and a Leading Lawyer by the Chicago Law Bulletin. He is a member of the U.S. Patent and Trademark Office, Supreme Court of the State of Illinois, U.S. District Court for the Northern District of Illinois, U.S. Federal Circuit Court of Appeals, U.S. Seventh Circuit Court of Appeals, U.S. Fourth Circuit Court of Appeals, and the U.S. Supreme Court.

Mr. Burns was born in Birmingham, Alabama and raised in the Chicago land area, where he still resides. He received his B.S. in electrical engineering from the University of Illinois in Urbana in 1972 and earned his J.D. degree from Chicago-Kent College of Law in 1978.

Why did he decide to focus on patent law?" I focused on this area of the law when I started lecturing and writing on patents for computer and electronic patents. I didn't have time to keep up with trademarks or other areas of IP law. I leave that to other experts in our firm."

What is the best part of Mr. Burns' job? "I have stayed with patent law because I like gadgets and gizmos. Technology is always changing, which means that patent law is changing, too. I am always learning, which I enjoy."

What is Mr. Burns known for professionally? "I think people appreciate my ideas, particularly in tough cases."

What area of the law is he most passionate about? "Patent law, of course."

Is there an area of practice that Mr. Burns would like to develop further into? He asserted:


"I am not interested in areas of practice outside of patents, but I would like to see the patent bar take more interest in revising the statute to address new issues raised by new technology. The Federal Circuit is constrained by the present statute and Supreme Court decisions, and Congress cannot respond quickly to the issues raised by the dramatic changes in technology over the last 30 years. The patent bar is best positioned to work through problems quickly and correctly, and I would like to see more of that."

Does Mr. Burns handle pro bono work? "I am a member of the Trial Bar in our Federal court. That means that I am obligated to take a pro bono case from time to time. Our court recently asked me to represent a prison inmate in a civil rights action. That case is pending."

Is he involved with any non-profit organizations? "I am a Board member and Treasurer of the IPLAC Educational Foundation, which gives college scholarships to exceptional under-privileged students in Chicago's public high schools."

What motivates Mr. Burns to teach? "I teach because I like people, and teaching makes me a better lawyer."