( 257 votes, average: 4 out of 5)
What do you think about this article? Rate it using the stars above and let us know what you think in the comments below. 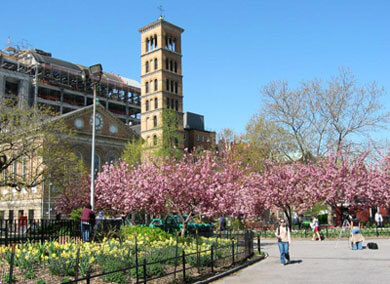 Ranked at the top spot for international law programs and tax law programs by U.S. News & World Report, the school is known to maintain relations with scholars around the world. It was also in the news for inviting blind Chinese dissident Chen Guangcheng and helping to defuse diplomatic tensions between U.S. and China.

The study program is highly clinic oriented with 27 clinics. On completion of their first years at the university, students are required to focus on one area of law out of the nine available.

The Career Services office of the New York University School of Law is well known for maximizing job opportunities for students and adjusting to economic trends. When the recession saw some big law firms at peril, the school increased its focus on small law firms.

The school ranks second for "Top 15 Schools From Which the Most 'Prestigious' Law Firms Hire New Lawyers." In government placements, too, the school is one of the best and ranks third for "Supreme Court Clerkship Placement." The University of Chicago Law School is also known for third highest per capita placement of alumni for U.S. Supreme Court Clerkships. In 2012, it was ranked fifth by the U.S. News & World Report in overall category.

Admission process is selective as expected from one of the nation's best law schools. New classes of students have a median GPA of 3.71 and a median LSAT score of 172. The school places extra importance on students with demonstrated dedication to public services and ethnic diversity.

The tuition fees are around $48000 and there are several scholarships available. However, the costs are compensated by the gain of a top notch educational brand on resumes that trails only Harvard in job placements with big law firms. Graduates of New York University School of Law have an average success rate of 96% at the bar admissions.

New York University School of Law does not rank students and does not maintain records of cumulative averages for its students. For the specific purpose of awarding scholastic honors, however, unofficial cumulative averages are calculated by the Office of Records and Registration.

Students' grades at New York University School of Law depend largely upon the grade received in the final examination. Grades are generally not provided for courses or sections in which the student is not officially registered.

For JD and graduate students, the letter grading system corresponding to respective GPA used is:

All students must maintain satisfactory academic progress. For JD students, satisfactory academic progress is understood to mean completion of the required first-year curriculum during the first year of enrollment with a grade of D or better in all courses. Thereafter, completion (with a grade of D or better and no more than eight hours of "uncompensated" D grades) of sufficient credits of coursework in each semester to allow for accumulation of a total of at least 83 credits, including 30 accumulated in the first year, by the end of the third year. A minimum of 12 credits must be completed each semester.

Students may elect to register for a total of 2 courses on a credit/fail basis during their final four semesters, provided the faculty member teaching the course lists the course as open to such registration.

Honors have been awarded at graduation based on final average as follows:

The law school offers two special internship programs for students interested in international law and public service, and a third program for those working in environmental and land use law.

The Center for Environmental and Land Use Law provides grants for summer internships to students working in environmental and land use law with environmental groups, government agencies, and other public interest law practice institutions in the US or abroad.

New York University School of Law's clinical program has long been renowned for the quality of its faculty, the variety of its offerings, and the innovative structure of its curriculum. With 15 full-time clinical faculty and 33 clinics, New York University School of Law provides students with unparalleled experiences in working with clients and communities to address urgent problems, influence public policy, and improve the quality of legal problem solving.

One semester-long clinics at New York University School of Law

The New York University Moot Court Board is a student-run, honorary organization that combines legal scholarship with oral advocacy. Staff members are selected from the first-year class on the basis of a brief writing competition held in early spring. Each year, between 30 and 35 students out of approximately 150 applicants are offered positions on the board. As second-year students, Moot Court Board staff members, under the guidance of third-year editors, choose to join either the NYU Law Moot Court Casebook Division or the NYU Law Moot Court Competitions Division.

The NYU Moot Court Casebook, published annually, is the most widely recognized and utilized set of moot court problems in the nation. (More than 110 law schools have current subscriptions.)

Chen Guangcheng, the blind Chinese "barefoot" lawyer and human rights activist is now a special student at the U.S.-Asia Law Institute at the New York University School of Law. Chen will also be receiving the 2012 Human Rights Award from Human Rights First. Chen's advisor and supporter Jerome Cohen will also be recognized. The ceremony will take place on October 24 in NYC.

ABA has released a report saying that only 55 percent of law graduates of 2011 found full-time, long-term jobs requiring bar passage nine months after graduation. According to its report, the figure for NYU graduates is 90 percent.

LawCrossing has received tens of thousands of attorneys jobs and has been the leading legal job board in the United States for almost two decades. LawCrossing helps attorneys dramatically improve their careers by locating every legal job opening in the market. Unlike other job sites, LawCrossing consolidates every job in the legal market and posts jobs regardless of whether or not an employer is paying. LawCrossing takes your legal career seriously and understands the legal profession. For more information, please visit www.LawCrossing.com.
( 257 votes, average: 4 out of 5)
What do you think about this article? Rate it using the stars above and let us know what you think in the comments below.

Rainmakers Study for the Knowledge, Not the Grades: An Internship Can Transform Your Entire Career

Rainmakers Study for the Knowledge, Not the Grades: An Internship Can Transform Your Entire Career