Ben Gibson: A Leader for His TimeDon't Panic! Ten Tips for Surviving the Bar ExamThe Job Profile and Work Involved as a Litigation Attorney

Factors to Consider When Choosing a Law School

The Original Plan of a Professional Legal Career, and Thereafter
< Back To All Articles

Denise Ben-David: From Paralegal to Attorney

Share
Tweet
Linkedin
273 Views
( 36 votes, average: 3.9 out of 5)
What do you think about this article? Rate it using the stars above and let us know what you think in the comments below.

Ben-David has worked for Ferrell for approximately seven years. "When I moved from New York, I joined the firm as a legal secretary/paralegal servicing the transactional department," said Ben-David. "After about six months, I was promoted to paralegal with no secretarial responsibilities. I currently work for the same firm as a first-year transactional associate."

While she was living in New York, Ben-David began working with an in-house title company for a small law firm, where she enjoyed the work and realized she had a natural affinity for the transactional world.

"Very quickly into my tenure, I realized that I could do so much more for my bosses and clients with the proper training and education. I took six months off to attend Mercy College's American Bar Association-accredited paralegal program," said Ben-David.

When it came time to relocate from New York to Florida, Ben-David contacted a recruiter. "I was very fortunate to have had interviews with a few well-known firms in Miami and more fortunate to have been offered a position with more than one. I chose Ferrell Law because of the wonderful environment, expertise in the legal field, and the firm's culture of supporting family and education," said Ben-David. 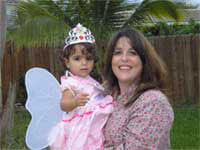 Ben-David said that what she enjoys about her job is being able to apply the knowledge she has gained over the years working with different attorneys and paralegals to facilitate successful transactions for her clients quickly and efficiently. However, it was one of her more difficult challenges—wanting to do more but having limited abilities and knowledge—that led her to law school.

Accordingly, Ben-David said that making the decision to go to law school and the tremendous support she received from her family, friends, and colleagues were two of the greatest emotional highlights of her career. Her employer and all of the staff and attorneys at Ferrell offered help and encouragement. She entered law school in September of 2002 and took the Florida bar exam in July of 2006. Ben-David was admitted to the bar in October of 2006.

If she could do things over again, Ben-David said, she would pursue a legal career sooner. But the road that she did travel allowed her to apply some school-of-life experience to her formal education and shape the foundation of her career.

"I ran a small business with my husband before becoming a paralegal," said Ben-David. "The 'real-world' business education that I received was invaluable. I am able to transcend the office mentality and understand the impact of what we do as paralegals and lawyers on the business outside of the documents," said Ben-David.

Juggling the demands of full-time employment and full-time motherhood is not for the faint of heart. Ben-David said that not only does she have the support of her husband when it comes to her career goals, but her employer is also very supportive of her dedication to her family.

Going on maternity leave is always difficult because the time leading up to the date puts other people in the office in limbo, for example. Will the deal close before I leave? Should they give the deal to someone else?" said Ben-David.

Her advice for paralegals who are preparing to take maternity or family leave is to make sure that their files are in order and that anyone can "step into their shoes" and run with their cases.

"Be organized in your office and remind people of your timing if the case/transaction might cut close to the due date. When you are on maternity, enjoy the time. Don't worry about what is happening at the office; you'll be back soon enough," said Ben-David.

One of the issues facing thelaw community today that Ben-David said she believes is most important is the problem of billable hours. "The demand on paralegals and attorneys to bill and be profitable puts a lot of pressure on the work day. Also, being able to balance career demands with family is a challenge," said Ben-David.

And to students who are preparing to become paralegals she says, "Go to an ABA-accredited school. Try to get exposed to a broad range of topics, even if you already know your focus. Drafting and research skills, along with organizational skills, are in top demand, so pursue those skills while in school," said Ben-David.

Ben-David and her husband live in the community of Kendall, FL, with their three children, a 12-and-a-half-year-old boy, an 11-year-old boy, and a 16-month-old girl. Their fourth child will be joining them sometime in May