Share
Tweet
Linkedin
212 Views
What do you think about this article? Rate it using the stars above and let us know what you think in the comments below.
The Law School Admission Test, or LSAT, is required for admission to all law schools accredited by the American Bar Association. It is the only other variable to be spoken of in the same breath as grades as a major factor in determining whether or not a candidate is admitted to a law school. Almost without exception, my students approach it with fear and trembling. 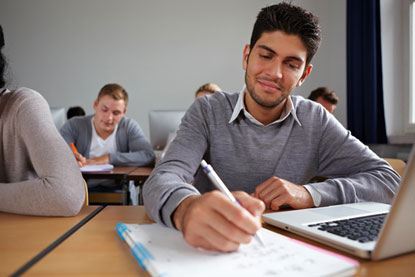 The LSAT counts and it is important to do well on it. But it doesn't pose the kind of irrational danger you may think it does. It is extremely unlikely that otherwise well-qualified candidates will have their application status drastically reduced by the LSAT. It is much more likely that their status will be confirmed, or even improved. To understand why this is so, you need to know something about the way the law schools use the test.

The Purpose of the LSAT

Remember, the main objective of law schools is to predict which candidates will be able to do law school work. Nowadays, the undergraduate grade-point average is the single best predictor of success in law school. But before World War II, undergraduate courses of study were not standardized and many colleges were not accredited. Grading standards varied widely, so colleges could not reliably be compared with each other. As a result of this variation, undergraduate GPAs were not always dependable predictors of law school success.

For this reason, law schools developed a single standardized test for all applicants to take, on the basis of which they could be ranked and compared. The Law School Admission Council, a nonprofit association of law schools, later created an organization, the Law School Admission Services, or Law Services (as it is universally known) to administer the LSAT, do research on the application process, and perform a variety of other administrative and statistical chores for the law schools.

Law Services has conducted research that demonstrates that the LSAT correlates with and predicts freshman law school grades. The better you do on the LSAT the better you will tend to do in your freshman year of law school.

Moreover, grades have become more useful. Now that undergraduate colleges are all accredited and their programs are nationally standardized, law schools can feel confident that grades earned at one college can be compared (perhaps with a little adjustment) to grades earned at another college. And recent studies have indicated that the undergraduate grade-point average is now a better predictor of law school success than the LSAT.

Why, then, do law schools continue to use the LSAT? There are several answers. One is that "the combination of a student's LSAT scores and undergraduate grade point average yields a better prediction of law school success than either measure when used alone." Law schools combine the two numbers in different ways, most weighing grades more heavily, but a few emphasizing the test. They claim improved predictive power for their admissions formulas when compared with either number used alone.

The gain appears to be small, however, and some law school administrators have questioned whether continued use of the LSAT is worth its cost. They fear that widespread use of cramming and test-preparation courses is reducing the predictive power of the LSAT. And they are sensitive to charges that the LSAT, like all standardized tests, is culturally biased: it is said to favor white, middle-class males, and to work against poorer students, African Americans and members of other minorities who are less familiar with mainstream culture, have less experience with standardized tests, and are less likely to be able to afford the expensive cram courses that might help them catch up.

For all these reasons, many law schools have decreased their reliance on the LSAT (though the trend to do so may have ended). That's good news for students who have, or hope to achieve, good grades. And it should calm some of the fears of students with performance anxiety.

But law schools are unlikely to dispense with the test entirely. To some extent, this is simply a matter of inertia, for all organizations resist change.

But there are other reasons. Some law school administrators fear that in the future the predictive power of grades may decline. They remember the widespread concern over the grade inflation of the 1970s, when all the students at some institutions seemed to earn only As and Bs while the students at other schools approximated the normal distribution, and they fear that the present debate over multiculturalism and decanonization may again lead to widespread disparities between schools. They hesitate to abandon their 45 years of experience with the LSAT (and to disband the organization of testing specialists and administrators that now administers it) when they may need a uniform, reliable predictor in the future.

The most selective of law schools consistently receive applications from thousands of well-qualified applicants each year. They need some way to rank students all of whom have superb grades. For these law schools, the LSAT functions as another hurdle or obstacle, another needle's eye that each candidate has to pass through.

Finally, some supporters of the test have turned the affirmative action argument around, arguing that African Americans and members of other traditionally disfavored minorities are less likely to make good grades, even when they possess considerable ability, either because they face bias or because they suffer from poorer preparation because of bias in the past. If we are to have more minority lawyers, the argument runs, minority prelaws need some way other than grades to demonstrate to law schools that they have the necessary intellectual skills. The LSAT provides such an opportunity.

This is merely a specialized case of a general argument: law schools won't admit an applicant unless he or she provides some effort of law-school related intellectual skills. The more chances a candidate has to do this, the fairer the application process is. As long as the LSAT has some predictive value, eliminating it would make the process less, not more, fair.

How Much Does It Count?

It counts. The LSAT and the GPA are the two "numbers" that determine most law school admissions. Most law schools are candid about the weight given to these two numbers.

If your grades are poor and your LSAT is significantly better, however, it points to a different conclusion. A low GPA doesn't mean you don't have intellectual skills. You can't prove a negative. The low GPA means that you haven't yet demonstrated these skills. There could be some reason for that other than stupidity. The LSAT, with all its weaknesses, is a test, a task, an opportunity for you to demonstrate what you can do. The test is independent of grades in the sense that a high score is evidence that you can do law school work no matter how poor an impression your grades have made. It's a second chance. In such a case, a thoughtful law school admission committee will weigh the test more heavily, especially if you can provide some plausible reason why your grades were low. This is the only practical way for most traditional applicants to compensate for poor undergraduate grades.

It was good, you guys have got lot of listings.
EliotÂ Walker

LawCrossing Fact #41: All LawCrossing users get 20% off resume-writing services from Resume Apple, a company that specializes in a variety of industries.