Share
Tweet
Linkedin
1076 Views
What do you think about this article? Rate it using the stars above and let us know what you think in the comments below.
Personal Life 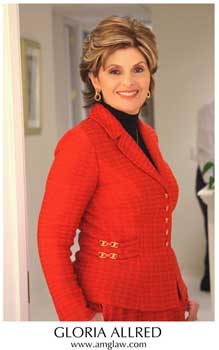 The hard working advocate for justice and equality is a three-time Emmy nominee for her commentaries on KABC television in Los Angeles. She was also nominated for an Emmy in 2011 for her syndicated television show, “We The People with Gloria Allred.” TIME Magazine labeled Gloria “one of the nation's most effective advocates of family rights and feminist causes.” In 1990, Los Angeles Magazine called her “One of the 30 Most Powerful People in Los Angeles” and in 1994, “One of the 50 Most Interesting People in Los Angeles.” Articles written by or about Gloria have been published in The Wall Street Journal, The New York Times, The Los Angeles Times, TIME Magazine, The Daily News, The American Lawyer, The Herald Examiner, Ms. Magazine, The London Times, LA Magazine and Elle Magazine to name just a few.

Gloria has won many distinguished awards. She was awarded the President's Award by the National Association of Women Lawyers. In 1986, President Ronald Reagan awarded Gloria the “1986 President's Volunteer Action Award,” for outstanding volunteerism for her exceptional work in proposing and helping to develop a child support amnesty program in California, which helped increase child support payments to single moms.

In 2004 - 2010, Gloria was chosen for inclusion in Southern California SuperLawyers listing by Law and Media and Los Angeles Magazine 2012. The successful attorney was selected by her peers as one of the “Best Lawyers in America” for 2011, 2012 and 2013. Gloria's high school, the Philadelphia High School for Girls, presented her with a “Distinguished
Daughter” award, which she accepted in Philadelphia.

Gloria is very proud of her daughter, Lisa Bloom, who is an attorney, an author and a television legal analyst. She has two grandchildren, Sarah and Sam. Gloria encouraged Sarah to go to law school and Sarah attends Fordham Law School in New York City.

The famed attorney enjoys eating at Nobu Malibu because the food is “delicious” and the beautiful restaurant faces the ocean. Her favorite book is Shoulder to Shoulder, written by Midge MacKenzie, which told the story of the suffragettes' struggle to win the right to vote for women in England. Gloria keeps this book in her office for inspiration.

She is also inspired by Eleanor Roosevelt's quote, “Women are like tea bags – they never know how strong they are until they get into hot water.” Gloria said the quote is inspirational to many women.

Gloria confessed that she is a workaholic, who works long hours on weekdays and weekends. She and her law firm have handled many cases in the 36 years she has been practicing law. She was the first attorney in California to announce that she would challenge the legal ban on same gender marriage in that state and then she and her law firm litigated the marriage equality case for 6 years and went to the California Supreme Court twice to win equal rights to marry for her gay and lesbian clients. Gloria also served as the president of the National Organization for Women, Los Angeles chapter in 1977 and 1978 and she is founder and president of the Women's Equal Rights Legal Defense and Education Fund.

Prior to becoming a lawyer, Gloria was a teacher at Benjamin Franklin High School in Philadelphia, Pennsylvania and then at Jordan High School and Fremont High School in Watts. She was asked why she decided to become an attorney. Gloria replied, “I originally became an attorney to help improve conditions in schools. Then, after I began practicing law, I became interested in women's rights and civil rights for minorities.” The civil rights advocate stated that if she wasn't a lawyer, she would probably be teaching or would be a high school principal.

What is the best part of Gloria's job? She stated, “The best part of my job is helping individuals who suffer injustice. I help them assert their rights, protect their rights and vindicate their rights. I help my clients to become empowered and to learn that they have more strength and courage to fight for justice than they ever realized they had.” The attorney discussed what she is known for professionally. She asserted, “I am best known for women's rights.” Gloria noted that her firm, Allred, Maroko and Goldberg has handled more cases involving women's rights than any other private law firm in the nation. In the last 10 years alone, she and her firm have won more than 250 million dollars for individuals who were the victims of discrimination on account of their gender, sexual orientation, AIDS, age discrimination and national origin. The attorney added, “I am a strong advocate for equal rights for all.” Gloria also talked about the areas of the law she's most passionate about. The University of Penn graduate declared that she is passionate about “women's rights, employment rights, economic discrimination, and representing individuals who were battered, raped, and sexually abused.” So what does Gloria think about the legal field today? She revealed she “would like to see more attorneys joining the battle to vindicate women's rights.” The attorney firmly believes that laws which exist to protect women need to be enforced. More are needed in this area.

When asked where does she see herself in five years, Gloria said “still practicing law with my partners and associates. I love what I do and I have a passion for justice and winning positive outcomes for my clients.” What advice does she have for people? She quotes Gandhi, “you must be the change you wish to see in the world.”

How does Gloria want to be remembered? She wants to be remembered as “as an attorney deeply committed to improving the status and condition of women and minorities. She did everything that she could to help win equal rights and protections for all.”

What cases is Gloria most proud of? The attorney claimed, “The most important cases are my past, present and future cases because I consider all my clients to be important. Gloria stated that she is proud of her 36 years of civil rights victories including her fight for gay and lesbian rights in the many cases that she has handled beginning in the 1980s and continuing until today. She is also proud of the legal precedents which she and her law firm have won for women's rights.

Gloria was asked about representing Nicole Brown Simpson's family. She said, “It was a challenging time. Nicole deserved to have a voice from her grave. There were many untrue statements made about her and her family. I was honored to represent them during the criminal case against O.J. Simpson.”

On November 28, 2011, Gloria, along with New York Attorney Mariann Wang, filed a complaint on the behalf of Cristina Fierro. Cristina, who is now 18 years old, was 16 years old when Rasheed Davis demanded that the minor have sex for money. She was forced to go to the hotel room of Lawrence Taylor, former Hall of Fame football star, whom Cristina did not recognize.

On August 10, 2011, Davis pled guilty to sex trafficking and was sentenced to seven years in prison. Cristina has filed a lawsuit against Taylor “under the Federal Trafficking Victims Protection Act which permits a child victim of sex trafficking to bring a civil action. Cristina is also suing Taylor under the Rockland County Administrative Code which establishes a civil cause of action for ‘any person claiming to be injured by an individual who commits a crime of violence motivated by gender.'”

Gloria believes this case is very important because every year in the United States, thousands of children's bodies are being sold for sex. The attorney recognizes that prosecution is essential, but emphasized that it is important for child victims of sex trafficking to understand that they can file a lawsuit against the predators who bought their bodies. The lawsuit declared, “In other words, not only can the pimp be sued but also the buyer who purchases a child's body for sexual exploitation may be subject to civil liability. Suing the buyer can have an impact on the demand for commercial sex of children. If buyers know that they may be liable for significant awards of damages for the physical and emotional suffering that they cause a child it may make them think twice before they engage in this reprehensible criminal act and civil wrong.”

Gloria made it clear that she believes that Taylor has not suffered any significant legal consequences for sexually assaulting Cristina. The attorney looks forward to vindicating Cristina's rights in Federal Court.

Another case Gloria is currently handling is a sex and age discrimination lawsuit she filed for nine women: Leanne Martina, Margaret DePamphilis, Marie Stewart, Elsa Hernandez, Yvonne Ray, Janie Burton, Rode de la Cruz, Dorrie Fitzgerald and Karen Mulkey. Her clients are suing Resorts Casino Hotel, where all nine women had been employed for a long time as cocktail servers. Gloria claims the “defendants fired each of the plaintiffs on or about March 7, 2011. All plaintiffs were told that they were being fired because they did not ‘meet uniform requirements.' Plaintiffs allege that they were fired because of their age and/or because they did not meet the gender stereotypes of defendants concerning a perceived ideal feminine body type.”

The plaintiffs were notified that they were no longer employed because they did not meet the uniform standards. However, the plaintiffs believe they were terminated “because of their age and/or because they did not meet the stereotype of youthful feminine sexiness desired by Defendants. It is our belief that these considerations of age or gender stereotyping were determinative or motivating factors in their discharge.”

Gloria has filed a lawsuit in New Jersey Superior Court and is “seeking damages including back pay, lost wages, damages for pain and suffering, punitive damages and injunctive relief.”

Gloria is truly a tireless and successful advocate for women's rights and there is no reason to believe she will slow down or back down when a woman's right has been violated. She will continue to be a champion not only for women's rights, but for all individuals who seek justice and equality.

University of California at Los Angeles School of Law

The Life and Career of Eugene Volokh: Professor, Pundit, and Entrepreneur

The volume of job postings is very good.
Daniel

LawCrossing Fact #97: We have an excellent track record of placing the right people in the right jobs.