An Adjunct Law Professor: To Be or Not to Be 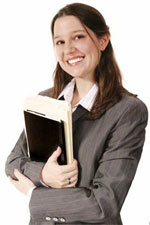 More solos are trying for the job of adjunct professors

On Aug.1 the ABA Journal published an article titled “To Teach or Not to Teach: Adjunct Work Can Come with a Hefty Price.” The article claimed “more solos appear to be considering adjunct teaching jobs as a means to supplement their income and test an alternative career path.” According to Michael Kaufman, the associate dean for academic affairs at Loyola University Chicago School of Law, more people are viewing adjunct teaching as an entry point to “teaching generally.” Considering that the average pay for adjunct professors was about $1000 per credit hour or about $3000 for a single course during a semester, the pay is insufficient for most lawyers attending firms. Kaufman however stresses that adjunct work does not usually lead to a full-time job as a teacher.

According to Jonathan W. Michael who taught an Estate Planning course at The John Marshall Law School in Chicago, “It is great to work with students who are interested in our area of law … It is also an honor to be appointed to the faculty at the John Marshall Law School.” So, the satisfaction of teaching interested and eager minds and the prestige earned from associating with academia is sufficient for some to accept the low pay.

Some topics which have become quite popular and discussed among readers on the internet include the costs of law school, the quality of education imparted, and the lack of practical professional skills acquired by law students. A popular article on the issue was published by the New York Times titled, “What They Don’t Teach Law Students: Lawyering” became an instant hit with those who had been debating on the poor quality of education. The article observed, “the nature of legal work itself is evolving, and the days when corporations buy billable hours, instead of results, are numbered.” Obviously, under such a situation, the benefits of being taught by teachers who are actually practicing law in the field are immense to law students.

In 2009, The Chronicle of Higher Education published an article, “Love of Teaching Draws Adjuncts to the Classroom Despite Low Pay.” Contrary to other efforts at explaining the phenomenon, the Chronicle rested its article on the results of a survey it undertook to understand the motivations and concerns of adjunct professors. As The Chronicle put it succinctly, “They don't make much money, they don't have health benefits, and they don't have job security. So why do adjuncts keep showing up to teach in college classrooms semester after semester, year after year?” And the answer according to them was summed up by a part-time teacher “It’s not the money … It’s about giving back to the community and seeing the students excel.”

The Life and Career of Marc Galanter, John and Rylla Bosshard Professor of Law and Professor of South Asian Studies at the University of Wisconsin-Madison and LSE Centennial Professor at the London School of Economics and Political Science.

The Life and Career of Marc Galanter, John and Rylla Bosshard Professor of Law and Professor of South Asian Studies at the University of Wisconsin-Madison and LSE Centennial Professor at the London School of Economics and Political Science.