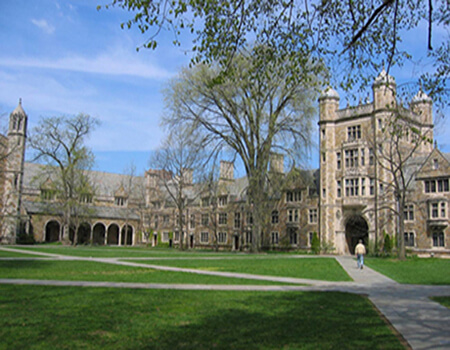 The University of Michigan Law School was founded in 1859 and enrolls only about 1,200 students. The school offers JD, LL.M, and Doctor of Juridical Science programs. The school currently has 81 full-time faculty members. From the graduating class of 2010, at least 92.5 percent students were employed by the 250 largest firms of the nation.

Michigan Law School has been among the top law schools of the nation with consistence. In the first U.S. News & World Report law school rankings published in 1987, it was ranked third, only below Yale and Harvard. It is one of seven schools which has never failed to be within the top 10 law schools as ranked by U.S. News & World Report. In the 2012 rankings, Michigan Law has ranked 10th overall. For international law it has the 6th position.

Admissions are highly selective as expected, and only eighteen percent of applicants are accepted at Michigan Law.

The application fee is $60 and there are provisions for both merit-based and need-based fee waivers. The admissions process is diversity oriented. In 2003, the Supreme Court upheld the admissions process at Michigan Law which considered race as one of the many factors for selection, however race is no more a consideration in line with constitutional amendments in Michigan.

Like other law schools, the early bird gets the worm, and most applications are submitted before the middle of January. Rather than an inflated personal statement, Michigan likes to-the-point personal statements from applicants, but makes up for the lack of space by providing the option of submitting optional essays.

Class rankings and grades are transparent and formalized. In first-year courses and all upper-level courses with 40 or more students the mean GPA is obtained from the Registrar’s Office and counted along with final grades. The target mean range of the mean GPA is between 3.13 and 3.25. Any deviation needs a letter from the Associate Dean to justify the deviation. Such standards are not mandatory in upper-level courses where there are fewer than 40 students.

There is no formal seminar grading practice and they are more lenient than course grades, ranging between a B+ and an A+, while in normal first-year courses, the guidelines are for aggregate A+, A, and A- grades – any departure needs to be justified by unusual circumstances of a particular class.

In calculating individual grades, rounding to the nearest whole number is practiced. So, in theory, every student can end up with 4 A+’s once things are rounded off.

Graduate student status is held irrelevant for the determination of grades for course work and research work, and graduate students are amenable to the same substantive standards as for J.D. students.

The “Order of the Coif” requires a minimum of 62 credit hours in courses at the Law School which are fully graded and factored into their honor point average.

Areas of legal practice where Michigan law graduates are employed

As in other big law schools, externships at the Michigan Law School is conducted under the guidance of a faculty sponsor and an attorney supervisor. Externships offer valuable learning opportunities and the University of Michigan Law School works with nonprofits and agencies like the Institute for Justice, Asian Pacific Islander Legal Outreach, the Food and Drug Administration, the Human Rights Law Network in India and the Financial Action Task Force in France.

The Michigan Law School also has special externships in other countries including externships in Geneva and South Africa. Students who are interested in externships nee to attend externship interest meetings that are held at the beginning of each semester.

Externship rules in the University of Michigan Law School include mandates that the student may not accept any payment for work done during the externship, but may accept reasonable out-of-pocket expense reimbursement. Externships are not allowed with any organization that works for profit or with a court as in judicial clerkship.

The University of Michigan School of law supports paid internships and other supplementary financial support to students. Internships are available in different programs like the Cambodian and Refugee Law Programs and the Aire Centre, London.

The main sources of internships, however, are the following organizations that work with the law school to provide internships according to their own programmes, schedules and deadlines. Students are requested to contact listing sources and follow their guidelines for acquiring internships. Listed organizations offering internships at the Michigan School of Law include

As, the Michigan Law School declares on its website clinical programs mean “Real-world experience with real impact.” For more than 30 years the Michigan School of Law has been offering clinical programs across a wide array of topics. The law school offers 14 clinics and student enrollment has doubled in the programs over the past five years. Clinical programs offer great opportunities for interdisciplinary and cross-border experience enriching students with better and broader perspectives of the application of law. The clinics also help to build greater public service commitments in students.

At the University of Michigan School of Law, moot courts are open to both second and third-year students. First year students have instead of moot courts, one oral appellate argument and brief as part of the Legal Practice class.

As one of the oldest law schools in U.S., the Michigan School of Law has an almost endless list of noted alumni. A few of the foremost, after leaving out most of the judges, senators, representatives and high officials, still include:

The Law School South Hall academic building at the University of Michigan Ann Arbor has been awarded the LEED Gold certification. LEED stands for Leadership in Energy and Environmental Design and is an internationally recognized certificate of sustainable green building design. Awarded by the U.S. Green Building Council, the LEED certification means that the Law School South Hall building passes the highest international benchmarks in measurable green building design, construction, maintenance and operations.

Sarah Bullard, one of the students who graduated in 2010 and were among the students who actively engaged in the sustainability project and urged the school to seek LEED certification told the media, “All along, we wanted to make sure the new building was beautiful but also sustainable, and for the Law School to be mindful of its impact, … and I'm very happy that we were able to not just meet our goal of getting LEED certification, but to exceed it."

Evan Caminker, the dean of the UM Law School said “We are very pleased by the LEED Gold certification, and also veryproud of how we went about achieving it … We wanted to make sure everything we were doing was sensibleand appropriate for the building, as well as sustainable. We made an effort to seek LEED points by doing only things that would work well for the building and the people who use and maintain it."

The 100,000 square-feet building houses classrooms, clinical spaces, multi-purpose spaces and the offices of Law School faculty. The offices of many law school administrators are also housed in the building.

The LEED Gold certification takes into account that the Law School building at South Hall has:

The Law School building is the fourth building at the Ann Arbor campus to receive the LEED certification. The Samuel T. Dana building of the University of Michigan, Ann Arbor is also LEED Gold certified.

The University of Michigan is extremely conscious about sustainability and ‘green’ concepts. Terry Alexander, the executive director of the university’s Office of Campus Sustainability told the media “This LEED Gold certification for the Law School addition is another example of the commitment from the University of Michigan toward sustainability in all that we do," said Alexander. "It also is an example of the great team of people we have at U-M. By combining the expertise from the Architecture, Engineering and Construction group, the Law School, our Occupational Safety and Environmental Health and Plant Operations professionals along with our external partners, we were able to go beyond what we thought possible to deliver a wonderful building that is environmentally friendly.”