( 279 votes, average: 4.2 out of 5)
What do you think about this article? Rate it using the stars above and let us know what you think in the comments below. 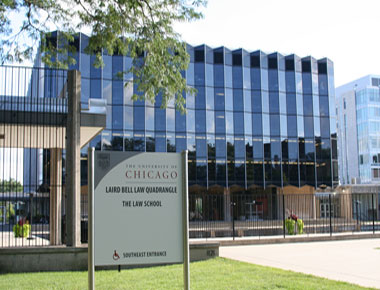 Established in 1902, by a group of distinguished donors led by John D. Rockefeller, The University of Chicago Law School has consistently ranked as one of the best in the U.S. The school is renowned for its contributions in economic analysis of law and the application of other social sciences. As the dean of the school says in his welcome message "The training you will receive as a Chicago Law student is second to none, and private and public employers alike will be glad to have you join their ranks."

The school ranks second for "Top 15 Schools From Which the Most 'Prestigious' Law Firms Hire New Lawyers." In government placements, too, the school is one of the best and ranks third for "Supreme Court Clerkship Placement." The University of Chicago Law School is also known for third highest per capita placement of alumni for U.S. Supreme Court Clerkships. In 2012, it was ranked fifth by the U.S. News & World Report in overall category.

In the case of selection of candidates and admission procedures, the University Of Chicago Law School places greater emphasis on LSAT scores than most others. Where personal statements are concerned, "The Committee looks for information that gives insight into the non-academic contribution you would make to the class. In general, a statement with a narrow focus on some personal attribute or experience is far more helpful to us than either a broad statement about the law or a restatement of your resume."

While the institution does not encourage submitting information that has not been requested, including optional essays, an essay on "Why Chicago?" is always welcome added to the personal statement. The school is trying to reduce as much paperwork as possible in the admission process and asks little beyond a resume.

Applications start being accepted from September 1st and offers begin being sent out by December, thought the official deadline for applications is February 1st . There is also a system of 'binding early decision' in place similar to that available in other big law schools.

The University Of Chicago School Of Law employs the controversial number-based scheme which has been abandoned by many top law schools. Other schools like Harvard and Stanford have abandoned the conventional grading system in favor of Honors, Pass, Low Pass and Fail. In some cases, schools have also arranged their grading systems in a manner to yield a greater number of A-range grades. However, Chicago Law School has maintained its numbers-based grading system for decades.

Chicago Law School employs a 155-186-point scale where ranges of numbers can be deemed to correspond to the letter grades in other schools. For example, the A-range would be between 180 and 186 and the B-range between 174 and 179. In classes with more than 50 students, instructors require to give an equal number of A-range and C-range grades to maintain a median grad of B/B+. The median in seminars is higher. In classes more than 10 students, the required median grade is 177. However, to avoid confusion of recruiters, the Registrar of the University records letter grades in place of numerical grades on the official transcripts of students.

An average score of 179 means a student graduates "with honors" and a final average of 180.5 means "with high honors." "Highest honors" is reserved for graduating with a final average of 182. The Chicago School of Law, also awards two honors based on class rank. The top 10% of students who manage the minimum of 79 credits receive the "Order of the Coif." Students who were within the top 5% in their first or second years, or within the top 10% in graduation years receive the "Kirkland and Ellis Scholars" designation.

Chicago Law School gives out several awards to its students every year. The notable ones are:

Honors have been awarded at graduation based on final average as follows:

Areas of legal practice where Chicago law graduates are employed

University of Chicago School of Law does not have externships where students study abroad for credit. However, the International Internship Program allows students who have completed at least a year of JD study to go for summer employment with employers outside the United States. The program brings together students interested in international practice and prospective employers who provide supervision and experience in legal practice.

The Office of Career Services at the Chicago University School of Law administers the Summer Judicial Internship Program under which students are connected to judges interested in accepting volunteer interns during summer. Recent records show that approximately 15% of the 1L class participates in internships with judges.

The University of Chicago Law School has many legal clinical projects which are deeply respected within the academia. The Chicago Law School is the first law school in U.S. to have established a clinical program for students, the Mandel Legal Aid Clinic, which continues to serve the people of Chicago. The clinical programs of the law school are housed at the Arthur O. Kane Center for Clinical Legal Education and they help second and third-year students gain hands-on experience in legal work under the supervision of faculty and practicing attorneys.

The major clinical programs at the University of Chicago Law School include:

The Edward W. Hinton Moot Court Competition is conducted by the Chicago Law School and it is open to 2L and 3L students. There are three rounds of competition, one each quarter.

Preliminary rounds take place in fall and are open to all 2L's and 3L's. However, 3L's who were semi-finalists in the previous year are not allowed in the preliminary rounds. Preliminary rounds do not involve the writing of briefs but consist of oral arguments. Participants use briefs prepared by practicing advocates to argue on both sides of current Supreme Court cases. Competitors appearing for the first time need to have practice argument sessions with a member of the Moot Court Board.


The Faculty-edited journals of the Chicago Law School include:

The University of Chicago Law School has produced many graduates who have gone on to hold top positions in business, government and judiciary as well as in the media. Some of the notable alumni are:

Legal expert Richard A. Epstein has written a hard-hitting article titled "What Was Roberts Thinking?" over the Supreme Court's decision in the Affordable Healthcare Act case. In the article, he calls Chief Justice Roberts "a lawyer who is too clever by half". Epstein is the James Parker Hall Distinguished Service Professor Emeritus of Law and Senior Lecturer at the University of Chicago Law School.

The University of Chicago Law School is one of the 15 law schools in the country whose graduates from the class of 2010 have an employment rate of 95 percent and higher according to the ABA.

LawCrossing has received tens of thousands of attorneys jobs and has been the leading legal job board in the United States for almost two decades. LawCrossing helps attorneys dramatically improve their careers by locating every legal job opening in the market. Unlike other job sites, LawCrossing consolidates every job in the legal market and posts jobs regardless of whether or not an employer is paying. LawCrossing takes your legal career seriously and understands the legal profession. For more information, please visit www.LawCrossing.com.
( 279 votes, average: 4.2 out of 5)
What do you think about this article? Rate it using the stars above and let us know what you think in the comments below.