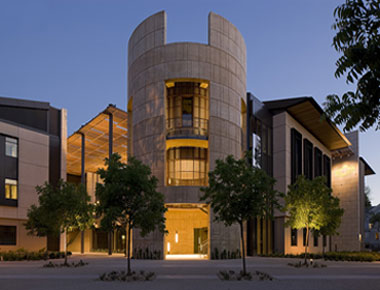 Stanford Law School was founded in 1893. The inaugural faculty included dignitaries like former U.S. President Benjamin Harrison. While the traditional environment has always stressed on creating a comfort zone both for students and faculty, the small classes and high attention from professors ensure quality. The environment is summed up by a comment from Kathleen Sullivan, former Dean of Stanford Law School: "Who could resist a world-class law school in paradise?"

Stanford Law School has been putting great stress on preparing students to work collaboratively with other professions for the past few years. Taking a multidisciplinary approach Stanford is one of those few law schools that create students suitable for working both in law firms and within large corporate houses. It is common to find students complementing their JD in intellectual property with an MS in bioengineering or someone interested in environmental litigation doing an MS in environment and resources along with his/her JD. As of this year, Stanford Law School offers 27 formal joint degrees. The number of students enrolling for joint degrees offered by the school has increased nine-fold over the past six years.

In the U.S. News Law School Rankings published in 2012, Stanford Law School overtook Harvard to gain the second place on the list. According to a Forbes list of Best Law Schools to Get Rich, Stanford is at the top with a mid-career median pay of $236,000.

Currently in the US News rankings, Stanford ranked within the top 10 in 2 (IP and Environmental law) out of nine specialty categories. That said, Stanford was not ranked in Health Law, Trial Advocacy, and Legal Writing. In the US News rankings from 1991, Stanford ranked at the 2nd spot 10 times, at the 3rd spot 7 times, and at 4th position once during 1991. While Yale stands at the top of the rankings undisputed, Stanford, over the last decade and more have continually dislodged Harvard to gain the 2nd spot in overall rankings.

Out of an average of 4500 applicants each year, Stanford Law School chooses 170. Applications are submitted electronically by completing prescribed forms. The application fee is $100 with prescribed procedures for waivers. A one-two page resume needs to be attached with the application for admission listing academic, extracurricular and professional activities.

The median undergraduate grade point average for successful admissions is 3.9 and the median LSAT score is 170. In its selection of candidates, Stanford puts great emphasis on personality, work-experience, extracurricular activities, and previous graduate study records. At least seventy five percent of new admissions have previous work-experience and at least a quarter of new admissions have another graduate degree.

One of the most important parts of the admission application is the 'personal statement.' The personal statement required to be submitted by each applicant needs to be about two pages describing 'important or unusual' aspects of the applicant, which are not otherwise apparent.

A statement from the Undergraduate Dean is required in prescribed format, but the requirement is waived in case of foreign applicants. Two to four letters of recommendation must be sent directly to the 'Letter of Recommendation and Evaluation Service.' Letters that are directly sent in to the Office of Admissions are rejected. LSAT scores and Credential Assembly Service Reports are mandatory.


The above LSAT and GPA data pertain to the fall 2011 entering class.

Stanford shifted from a traditional letter gradating system to a four-level approach in 2009 to provide more flexibility. The new grading system at Stanford law school became effective from the class of 2010 onward. The Order of the Coif or "Graduation with Distinction" honors is no more issued. Prizes are awarded in individual courses to recognize outstanding student performance.

From Autumn Quarter 2009-10, all earned units are quarter units and not semester units. The grades are as follows:

The new grading system which came into effect from May 2008 includes a shared norm for the proportion of honors to be awarded in both exam and paper courses.

The law school no longer uses or awards the Order of the Coif or “Graduation with Distinction” honors. Instead, prizes are awarded in individual courses to recognize outstanding student performance. In first-year required classes, two prizes are available in small sections, and four in large sections. In advanced classes, professors have discretion whether and how many prizes to award. The maximum guideline for all courses is one per every 15 students. Prizes are registered on student transcripts.

Areas of legal practice where Stanford law graduates are employed

Externships at the Stanford Law School are taken as complementary to the Clinical Program. Students who want to legal work not available through clinics, or wish to supplement their training take externships at non-profit agencies, public policy organizations and government offices. While working in externships, students can make court appearances under the supervision of an agency or attorney. They can also do client interviews, legal research and writing. Along with the uncompensated externship work, the students can also engage in an Externship Companion course or supervised tutorial that helps them to learn from their experiences in a structured academic setting.

Stanford Law School has two principal externship programs the SEP or Standard Externship Program and the Special Circumstances Externship Program or the SCEP. The SCEP allows students to earn academic credit from anywhere in the United States or the world. Under the SEP students work in the Bay area and have to attend weekly seminars. There is no point in trying to mention the list of international internships at Stanford Law School here save that it, by itself, is a complete directory.

Internships and summer associate programs are available from both public interest and for profit organizations including law firms. Besides work offered by law firms in the form of summer associate jobs, Stanford Law School has its own programs of Pro Bono Work, Internships and Externships. Most of these are also associated with clinical programs. Students of Stanford Law School may have the widest array of choices compared with other similar schools and the career office helps them to make their decisions.

Stanford Law School is one of the most progressive law schools in the U.S. and the world. The students gain hands-on experience in different subjects including the application of international law or legislative procedures through different programs and clinics.

The major moot court competition at the Stanford Law School is the Marion Rice Kirkwood Memorial Competition. The competition takes place during the Autumn and Winter terms each year, with the Autumn term for brief writing and written part of the Competition and the Winter term largely for the verbal part. Enrollment to the completion is limited to a total of twenty teams with each team consisting of two persons. In case of oversubscription a lottery is used. Applicants need to enroll separately both for Autumn and Winter terms.

Moot court competition is preceded by materials and lectures on research, brief writing and techniques of oral advocacy. Each team needs to submit an appellate brief and complete at least two oral arguments, one on each side of the case. The final draft of the brief is scored by course instructors and members and members of the Moot Court Board. The moot court competition also allows videotaping and critiques of practice oral arguments. Local attorneys also serve as judges on panels. Based on scores, teams are selected for quarterfinal, semifinal and final rounds. The final round of the Competition is before a panel of distinguished judges.

Stanford Law School has about 11 student published journals with the Stanford Law Review being the most respected. Other journals include:

Stanford Law School has consistently produced graduates who have achieved high-ranking positions in the legal field, especially in terms of judicial appointments. Stanford alumni are well represented on the benches of the federal courts and in California's judicial system as well. Besides, judges the law school has also produced several entrepreneurs and media personalities.

Jennifer Stisa Granick is the new Director of Civil Liberties at the Center for Internet and Society (CIS). The center, run by Stanford Law School, works on issues relating to cybersecurity, national security, government surveillance and free speech. Granick is a renowned expert in computer crime and security, data protection and related issues. She has served as founding executive director of CIS from 2001 to 2007 where she taught Cyberlaw and Computer Crime Law. Granick is also a columnist for tech magazines such as Wired and has published several law review articles.

Stanford Law School is teaming up with Pearl Meyer & Partners, an independent executive compensation consultancy. The firm will work with the law school's Arthur and Toni Rembe Rock Center for Corporate Governance as a Venture Circle Program Partner. Pearl Meyer & Partners will be contributing sponsorships, scholarship, policy relevant research and help develop programs. The center at Stanford Law School was created to research corporate governance in a cross-disciplinary environment.

Stanford Law School has an employment rate of 97 percent for its students who graduated in 2010, according to the recent ABA report in which several other schools’ placement rates are also available. The data has been made available because of mounting public pressure over the placement rates of recent law school graduates.

Stanford Law School Dean Larry Kramer will be stepping down from his position in September 2012 and will be joining the Hewlett Foundation, where he will serve as its head.