( 231 votes, average: 4 out of 5)
What do you think about this article? Rate it using the stars above and let us know what you think in the comments below. 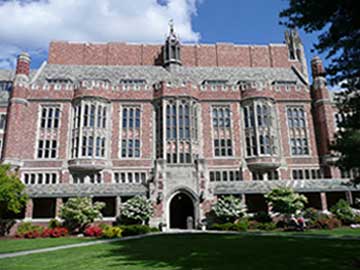 Yale law had its modest beginnings in the shape of an apprenticeship program at the law firm of Seth Staples, in the 19th Century. Since then, Yale Law School has been at the forefront of America's, and the world's premiere law institutions, unconventional, student-oriented, and result-driven.

Yale produces students who go on to lead the nation not only in the field of law, but any social sphere that needs leadership and analytic thought patterns. Recent public figures graduated from Yale include Bill and Hillary Clinton, President Ford, Supreme Court Justices Samuel Alito, Sonia Sotomayor, Clarence Thomas and others.

Yale Law School has continuously been ranked at the No 1 spot since the beginning of U.S. News Law School Ranks, and continues to hold the top spot. From the year 2000 onwards Yale has more graduates placed as Supreme Court Clerks than any other law school in the country. Yale's faculty is recognized as the most cited law school in the United States.

The admissions process is admittedly daunting, but that is not unexpected from the nation's best institution. Yale only admits about 200-250 students from close to 4000 applications each year. All applications are first reviewed by the Dean of Admissions and then those that are approved are forwarded for further approval to three randomly chosen faculty members who are kept in the blind about the previous academic scores of the candidate.

Naturally, the admission process is a bit longer than usual, but Yale is also known to admit deserving candidates whose GPA or LSAT scores did not meet the standards of other big law schools. Yale treats each applicant personally and tries to select the most meritorious and scholarly and not necessarily those with the highest marks in examinations. This is why Yale focuses on a 250 word essay from applicants, and puts great value on that.

Faculty member recommendations, especially of two faculty members who know of your academic work can help secure a place in Yale Law School. But, of course, it's no absolute surety.


The above LSAT and GPA data pertain to the fall 2011 entering class.

As stated on the Yale Law School website, "There is no required "curve" for grades in Law School classes. Individual class rank is not computed and the grading system does not allow for the computation of a grade point average." This strong departure from the 'attorney production factory' model keeps Yale Law School ranked at the top year after year and for more than a century.

Yale requires only a single semester of attendance each year contrary to other law schools which require participation for a full academic year each session.

The grades for all degree students are Honors, Pass, Low Pass, and Credit. Below that is "Failure" which means that the student receives no credit for the course. "Honors" indicates performance better than the average level. "Pass" indicates successful performance. "Low Pass" is performance below the level expected from those awarded a degree, and "Credit" means the course has been completed.

Certain advanced courses and all first-term courses are on a credit/fail basis. The "RC" or "Requirement Completed" indicates pre-participation in Moot Court or Barristers' Union for a JD.

The new grading system which came into effect from May 2008 includes a shared norm for the proportion of honors to be awarded in both exam and paper courses.

The law school no longer uses or awards the Order of the Coif or “Graduation with Distinction” honors. Instead, prizes are awarded in individual courses to recognize outstanding student performance. In first-year required classes, two prizes are available in small sections, and four in large sections. In advanced classes, professors have discretion whether and how many prizes to award. The maximum guideline for all courses is one per every 15 students. Prizes are registered on student transcripts.

Areas of legal practice where Yale law graduates are employed

Externships are usually available through the various clinical programs. Students can earn up to 3 credits for assisting state or federal prosecutors in their work. Externship is usually available in New Haven and nearby cities in prosecutorial assistance. Prosecution externship requires placement at the U.S. Attorney's office by arranging at least four months in advance for security clearance procedures.

Summer internships for Yale Law School students are available in both public-interest and for-profit organizations. The law school also has Summer Public Interest Fellowships where eligibility is based on financial need. Students can sequentially serve in multiple internships, and taken together, internships may extend more than 12 weeks.

The Jerome N. Frank Legal Services Organization of Yale Law School has an intern program and the program officially runs from the day following Memorial Day till Friday before Labor Day. The stipend for 2012 summer is $13.75 per hour.

At Yale Law there are more than 20 clinics and it is common for student to participate in multiple clinics. The two most prominent clinics are the Jerome N. Frank Legal Services Organization (LSO) and the Allard K. Lowenstein International Human Rights Clinic. The Jerome N. Frank Legal Services Organization is dedicated to providing legal representation to individuals and organizations unable to afford proper private representation. There are about a dozen separate clinics under the program.

The Allard K. Lowenstein International Human Rights Clinic is a law school course to expose students to first-hand experience in human rights advocacy. The clinic undertakes research, advocacy, litigation and projects on behalf of human rights organizations and individuals who are victims of human rights abuse.

Attending and participating in moot courts is one of the requirements of student curricula at Yale Law. The Morris Tyler Moot Court Competition is held each semester and all second and third year students are eligible. First-year students are allowed to participate in a "pre-part" program in the competitions.

Yale, being the premier law school in the country and one of the oldest law schools has produced many famous personalities that have contributed to America across many fields. Yale alumni are present in huge numbers across the federal courts and other high-ranking government positions.

Some of the more famous people in recent times include:

A study on climate change carried out by the Cultural Cognition Project at Yale Law School has concluded that public apathy over climate change is not related to science literacy. The study was funded by the National Science Foundation and was published in Nature Climate Change.

The Cultural Cognition Project at Yale Law School is an interdisciplinary effort by scholars to study how cultural values create and shape public risk perceptions and the related policy beliefs.

Yale Law School continues to be the top ranked law school in the country according to the 2013 U.S. News & World Report rankings of U.S. law schools. It has continued to retain the top spot since the magazine began the law school rankings in 1990.

What You Need to Know about Law Professorships

What You Need to Know about Law Professorships