Tribeca's a stretch; Subaru puts its spin on a 'progressive' SUV

Honda's 8th-generation Civic is all grown up

Honda Has Delivered More of Everything in Its Bigger, Redesigned Accord

Go topless: Saab 9-3 provides top-drawer comforts for top-down ride
< Back To All Articles

Smart Fortwo May Look Like a Toy, but the Engineering Behind It Isn't Kid Stuff

Share
Tweet
Linkedin
530 Views
( 69 votes, average: 4.7 out of 5)
What do you think about this article? Rate it using the stars above and let us know what you think in the comments below.
And then from other people:

"Which end (does) the popcorn come out?"

"If you hook two Smarts together do you get a whole car?"

"Half the car? Halve the price!" 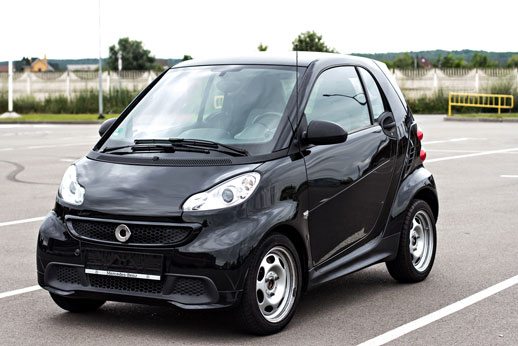 Oh, yes, very funny. I heard a lot of comments in a week and a half of driving the shortest new car in the United States, which is just being delivered to its first owners. Many are familiar with Smart because various models - including a roadster and a four-seater - have been on sale in Europe, Canada, Mexico and elsewhere for a decade.

The Smart Fortwo coupe is a rear-wheel drive, two-seater that doesn't drive like a toy, though it looks like one. It also is available as a convertible, which SmartUSA calls the Cabrio.

The Smart car is like no other and the company is marketing it like no other, including how it spells the names without using capital letters, such as smart fortwo passion. But the company is smartUSA. For the sanity of my copy editor, I will use proper capitals and lowercase lettering.

And instead of writing a road-test evaluation, it might be easier for me to answer the slew of questions I was asked about this car. Among them:

Q: "Is it battery powered?"

A: No. It has a 70-horsepower, 1.0-liter three-cylinder gasoline engine, which uses premium fuel. A diesel is available elsewhere, but SmartUSA won't bring it to the United States. It's a performance dog, a spokesman said.

Q: "Is it a manual? All the cars I saw in Europe were manuals."

A: No, this has a five-speed automated manual transmission, which is an electronically shifted manual. And it is quirky. Volkswagen and other makers of automated manuals have refined the shift points to be smooth and progressive. This automated manual works as if a phantom passenger is pressing the clutch and engaging gears. It's a charming motion, in a way, but also annoying when you need to move quickly.

The transmission is calibrated for maximum economy, so it upshifts before full power is achieved. That's fine until you are bogged down in traffic and the transmission wants to move into fourth, but you need the rpms of second to stay with the pace.

A manual mode, with shift paddles at the steering wheel, allows the transmission to be held in a lower gear for quicker acceleration response. I used it frequently in traffic and could make smoother gear changes manually than in automatic mode.

Q: "Can you drive it on the freeway?"

A: Top speed is 90 mph and it cruises easily at 80 to 85 without tendency of tipping. Acceleration to 60 mph is 12.8 seconds, SmartUSA claims, but speed builds quickly in second, third and fourth gears.

It was quieter than expected, too. Wind noise isn't an issue and there is little harshness that transfers from tires or road surfaces.

A: 33 mpg city, 41 highway. I can understand why fuel is sold by the liter in other countries. With a gas tank of just less than 9 gallons, it'll be no issue to fill it up, even with the price of premium.

Q: "Shouldn't it get better mileage?"

A: Using last year's EPA fuel-economy calculations, the Smart got 45 mpg highway, but the 2008 ratings reflect the real-world mileage. Last year there were 200 cars that were rated 30 mpg or higher on the highway. This year there are 90. The engine is classified as Ultra Low Emission, but the EPA Green Vehicle Guide Web site has not yet posted scores for air pollution or greenhouse gas scores.

A: It seems to be. I could drive it 80 mph on the Interstate with complete stability, even in evasive maneuvers. Smart says its cars are tough nuts to crack, literally. The high-strength steel safety cell acts as a nutshell to protect occupants.

Safety features include 11-inch front disc brakes (8-inch rear drums) with ABS, brake assist, brake-force distribution, electronic stability with hill-start assist and traction control. The rear tires are wider than the front tires and it is rear-wheel drive, so the weight is over the drive wheels, which should make it good in snow.

A: Maybe you'd be punched across the highway like an English walnut?

Elevated seating moves occupants away from bumper height of a side impact. Side rails, front and side air bags and side-impact braces in the doors also help.

There is an impressive video of Smart crash testing online. And that was for the smaller, European car. Just search for "Smart car crash." The Smart for North America is a few inches longer for crash protection.

A: Different. I feel more vulnerable in traffic while driving a Miata, in which occupants look out at the tops of truck tires. The Smart rides taller, and with the large interior space it doesn't feel like a toy car. The substantial steering wheel fits well in hand and the ride quality isn't jittery as might be expected of a car this size. It rides smoother on the highway than on city streets.

It's a tough little car with a Euro-firm suspension, which is good for nimble maneuvering, but it also makes for a jarring impact with potholes. Drivers with sensitive backs may not care for the ride.

Owners will find new opportunities with this car. For example, my wife always parks in the driveway, which leaves me with street parking. But I could drive the Smart Fortwo behind her Camry and onto the front lawn, where it would look more like lawn art than anything.

Q: "Can you park it nose-first into a parallel spot?"

A: Yes, but be prepared to justify this action with the parking-management officer. Technically, two Smarts can fit in one space, but which pays the meter?

A: The cabin is quite accommodating for many sizes. The burly, 6-foot valet at the Hard Rock Hotel fit in the passenger seat, though he appeared perched and awkward. There is headroom for those up to 6 feet 5 inches and the open space under the dashboard allows room for long legs, unhindered by a long center console.

The passenger seat sits a little higher and can go back farther than the driver seat. That's not bad, just different.

Q: "Does it have cruise control?"

A: No, and the base Pure model doesn't come with power windows or air conditioning, which seems a rip-off when charging $12,000 for half of a car.

The uplevel Passion, $14,235, adds most of the conveniences expected for a vehicle in that price range.

The glass roof adds to the perception of spaciousness - even in cool weather the cabin got warm when the sunshade wasn't drawn. It could get really warm in the summer if the air conditioning isn't up to the task.

A question to ask SmartUSA: Was the air conditioning beefed up for American humidity and heat?

A: It was too early to know at press time. I called my insurance agent, who said it appeared the car would be rated somewhere around the Toyota Corolla and Honda Accord. It's classified as a two door and two seater. SmartUSA said: "Each insurance company will dictate their rate. We have reached out to all major insurance companies and they are preparing rates."

A: Yes, and SmartUSA plans to develop a front-attaching tow bar.

SmartUSA will do little advertising of the car, which is the beauty of having a product that people want and will seek out. That also means the first owners to take delivery will be answering a lot of questions. In time, they will think they should be paid as company ambassadors.

SmartUSA held a national tour last year to help educate consumers and jump-start sales. As of July, Smart was claiming 30,000 $99 reservations had been made at the SmartUSA Web site. Smart won't say how many cars they can deliver in the next year, but there are 68 dealers across the United States.

"We have over 1,000 reservations for our store," said Smart Center San Diego director Udo Kaiser. "Our allocation, however, for the first year has been set at 700 vehicles, and I am not sure how many we will get after that."

If you've ordered the car, but haven't had a test drive, not to worry. Chances are you will love the car, but if not, you'll be able to sell it quickly and make a little money on the deal.

Mark Maynard is driving in cyberspace at mark.maynard@uniontrib.com.

Tune in to signonradio.com and join Maynard's Garage Internet radio at 1 p.m. PST Mondays for 30 minutes of automotive news and reviews.

And click into Maynard's Garage blog site at weblog.signonsandiego.com/weblogs/garage.

PLUSES: A well-made small car that doesn't drive like a toy.

The Smart Fortwo will be sold in the United States through Penske Automotive Group.

The Passion Cabrio, $17,235, comes with a three-mode automatic soft top and has the standard features of the Passion coupe but includes a premium sound system with an in-dash, MP3-compatible six-disc CD changer.

For a video test drive of the Smart Fortwo, go to uniontrib.com/more/carculture.

LawCrossing has the huge number of active jobs postings. I found my dream job here, thanks
Jay