The Life and Career of Steve Young : Lawyer and Football Player

Share
Tweet
Linkedin
44276 Views
What do you think about this article? Rate it using the stars above and let us know what you think in the comments below.
He led the 49ers to a 13-3 record and won the NFL MVP Award for the second time in 1994 — which was also the year he graduated from law school.  Steve Young is recognized as one of America's most notable football stars, but few know that he is also a lawyer.  Though he has never practiced law, he has used his acquired skills and natural talents for good as an influential sports role model, entrepreneur, and humanitarian. 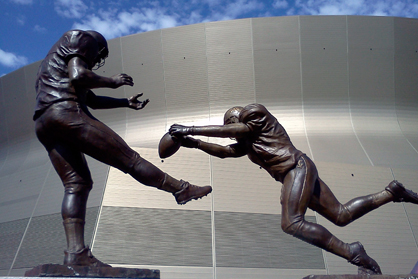 Young's father was a corporate counsel attorney, which, after many curious childhood visits to his father's office, influenced his decision to pursue a law degree in graduate school.

"I think there was a natural affinity to become a lawyer," Young says. "With my dad being a lawyer, in my mind, I think, I was always going to go to law school."

After completing an athletically and academically successful high school career, Young went on to attend Brigham Young University (BYU) and made it onto the school's football team. (By the way, the school is named after Young's great-great-great-grandfather Brigham Young, who was the second president of The Church of Jesus Christ of Latter-day Saints.) Young's first two years on the team were more of a struggle for him, so he began to focus his professional sights on law school...until things turned around for him later in his college career.

"I really didn't know about pro ball. You can imagine — my sophomore year in college, I'm like the eighth-string quarterback, so I'm making plans thinking I'm going to be a lawyer. In the next two years, I'm First Team All-American and being the number-one draft choice in the NFL, so I kind of had to make some adjustments."

After redeeming his athletic career at BYU and making a name for himself in college football, Young wrapped up undergraduate school and launched into his football career.

Young signed a 10-year, $40 million contract with the United States Football League (USFL) in 1984. His career with the USFL started out a little rocky because Young had to take a few classes so he could graduate on time. Later on, though, he was able to start in the 12 final games of the season, and he came out with a good year behind him.

<<Young was the first player selection in the supplemental draft in 1984, and he signed with the Tampa Bay Buccaneers the next year. He played with the Buccaneers for two years before he was traded to the San Francisco 49ers in April of 1987.

Young joined the 49ers as Hall of Famer Joe Montana's backup. Though he still shone as a backup, Young had some time on his hands during his first several years on the team.

"I had to back him [Montana] up for four years, and I was going crazy because I wasn't playing. I really wasn't happy with that, so I was bored to tears," says Young.

So what did he do about it?

The ever-ambitious Young started at the BYU J. Reuben Clark Law School in 1988. There, in between his football-career demands, Young was able to enrich his academic side.

"The biggest issue was me playing professional football and showing up trying to be a regular law student. That was interesting," he says.

Because of his hectic football seasons, Young worked out a unique schedule with the law school that basically meant he attended school for six winter semesters.

"I'd finish the Super Bowl, and literally the next day, I'd be in class a month late. Then I'd have to sprint to catch up. I think the professors kind of relished punishing me for that," says Young.

<<"In 1994, I finished the Super Bowl and went straight to law school the next day. It had to be a little strange for people in class too," he continues.

Despite his demanding schedule, Young managed to get through his classes even if it wasn't a typical law school experience.

"They were really aggressive in law school to make sure that we had a well-rounded law education. I think they really worked to make sure that we were ready to represent the school," he says. "For a religious school, comparatively, I think it was a pretty diverse faculty."

By the time Young graduated from law school in 1994, he had won the NFL MVP Award twice and had been to the Super Bowl three times. Needless to say, he could afford to keep his day job.

"I was very serious about graduating," says Young. "I don't claim to have graduated in the top of my class, but I wasn't in the bottom either. I always felt like if I could maintain a pretty average GPA, I'd feel that I was pretty successful."

"My law degree has been invaluable because now I'm in the private equity world, and even though I'm not practicing law, I'm certainly using my law degree daily. I'm surrounded by MBAs, and there's skill sets for each. It's kind of neat that there are some skills I have that these Harvard MBAs don't have," Young says with a laugh.

Even before Young graduated from law school and founded Sorenson Capital, in 1993, he launched a charitable foundation called Forever Young Foundation.

"There were a lot of smaller charities in the area; I would go to their dinner. They would spend half a year preparing for the dinner and then raise their yearly budget of $30,000. Then they'd spend the second half of the year doing this great service. I thought, 'That doesn't make any sense. I should start a foundation, raise the money, and fund their programs, and they can do these great services in the community year-round without worrying about fundraising,'" Young says of the foundation's birth.

Forever Young Foundation started out helping smaller charities fund their projects, and now that the organization has grown, it supports a variety of its own projects around the world.

"We're not a massive foundation, and we have a good group of people running it. I never wanted to be disassociated from it, but I certainly didn't want it to be the 'Steve Young Foundation;' I wanted it to have its own legs, and I think that's where we're headed with it," Young says.

<<Young is also an active member of the Church of Jesus Christ of Latter-day Saints, a religion that has been praised as well as criticized for its high religious standards and values. Nevertheless, Young claims to have never had a struggle staying true to his beliefs and standards.

"It hasn't [been a struggle]. I never question my beliefs in my mind. They're very much a part of my very being. There's no doubt, but I couple that with an understanding of 'I very much respect what you do too.' That respect of others, along with a very firm commitment to my own beliefs, really made people respect it," Young says.

"It's very unusual to have the quarterback be a guy that doesn't go grab a beer with the guys. I made sure that when they went to go get a beer with the guys, I was there drinking root beer. I made it normal. I tried to make everything I did as normal as possible for others so I could put others at ease," he continues.

Ever since he was a kid, Young has looked up to businessman and football legend Roger Staubach.

"He was my hero. I certainly wanted to be like him. He didn't know me, but I certainly watched everything he did. When I became a well-known athlete, I felt like I needed to pay it forward. He inspired me to be a great player and good person and have good values and respect people. I feel like I now owe that to that other unknown kid at home that's watching me. I think he was more influential than he could have ever known," Young explains.

"I have secrets to success," he says. "It's a sense of humility — I don't know everything, but I'm here to learn it. Savviness — listen to and watch other people; be a people person. So many people are so focused on getting their own careers started — so self-interested by nature because of the places they are in their careers so early on. They don't look up and gain perspective and look at the needs of others — that will certainly get you further if you do that. You need to be really understanding of what is going on around you. Couple that with a work ethic that's unchallenged and relentless, and you'll be guaranteed to get as far as you can get."

Barton Cerioni Knows How to Seal the Deal for Baseball Players

The Life and Career of Jeffery Leving Expert in Family Law

LawCrossing helped me learn what the current hiring trends are. The site is a good indicator of the legal market.
Steven S.

LawCrossing Fact #185: Our application system allows you to apply for multiple jobs at the same time, saving time and energy!