By James Kilpatrick
( 10 votes, average: 5 out of 5)
What do you think about this article? Rate it using the stars above and let us know what you think in the comments below.
The case involved the hunting of game birds in South Dakota. The facts were not in dispute. Robert and Judith Benson own a ranch in Tripp County, down on the Nebraska line. There they raise mostly livestock and a variety of crops, but they also devote a substantial part of their property to a private hunting preserve for pheasant. 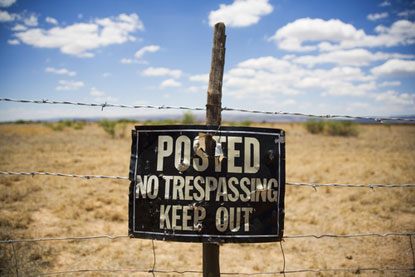 For good or ill, hunters lawfully engage in road hunting along several miles of the Bensons' land. The family has experienced buckshot 200 feet inside their property. On one occasion hunters shot out a window of their home. Fed up, in October 2003 they filed suit in state court alleging violation of both state law and the federal constitution. They complained, in sum, that the state is effectively taking their property for public use without payment of just compensation.

The Bensons won in the trial court, but lost on appeal to the state supreme court. Now they have lost their appeal to the U.S. Supreme Court and must try their luck back home with civil suits. It promises to be a difficult job.

The high court should have taken this one. Under South Dakota law, hunters are now free to hunt small game from public roads. The law excepts certain zones protecting schools, churches and private homes, but otherwise it is bang-bang-bang. Total strangers are free temporarily to lay down their guns, climb over fences into a private game preserve, and there recover privately propagated birds that inadvertently fly their way. True, game birds, even hatchery chicks, are public property once they fly away, but all the same it doesn't seem right.

Justice John K. Konenkamp of the South Dakota Supreme Court obviously felt uneasy about concurring even in the result of his colleagues' opinion. Their rationale was "worrisome." By agreeing that there had been no actual "taking" of private property, he concurred only in the result. The state had struck a difficult balance, he said, between the interests of hunters on one side and landowners on the other, but the balance fell within constitutional limits. If hunters obey all the rules of road hunting, "the interference to landowners from shooting from or across a public road at wild game in flight will be minimum."

Besides, he added, "the huge benefit the state obtains through tourism and recreational hunting outweighs any transient and marginal interference to landed interests." The state had not permanently occupied any property. At worst, the interference here will be episodic and seasonal. Shooting over the Bensons' property is a minimal intrusion and therefore not compensable. But after all that, finally, he had a warning: "Those who hold greater designs on private property for public recreational uses would do well not to be emboldened by today's ruling."

Justice Judith K. Meierhenry dissented clearly and emphatically. The state legislature had taken away a landowner's right to exclude road hunters from hunting over his private property. This is "a taking without just compensation," which the U.S. Constitution clearly forbids. As the lower court had ruled, "the right to exclude others is one of the most essential rights that are commonly characterized as property."

That makes sense to me. In their appellate brief, with support from the Mountain States Legal Foundation, the Bensons argue that a "right to exclude" has been identified repeatedly before the Supreme Court. The right is supported by ordinary prudence: "Obvious conflicts and potentially serious injury could ensue when property owners confront armed 'civil trespassers' and assert responsibility over that for which the state taxes its citizens, yet does not provide — the physical expulsion of trespassers from private property."

When such confrontations develop, as the Bensons believe inevitably they will, "the so-called police power will have become only an excuse through which to redistribute political favors rather than a means to thwart armed invaders, to protect property rights, and to obviate the need for self-help that will lead to bloodshed."

A personal note: A very long time ago, I served happily as outdoors editor of the Richmond (Va.) afternoon newspaper. I have nothing against the harvesting of game, or for humane hunting either. I say only that other values are more important still, such as the right to own property and the right peacefully to possess it.