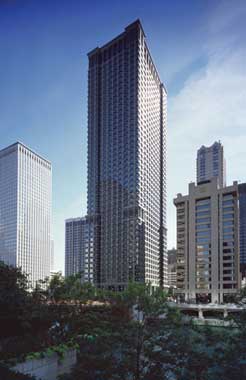 Advice to law firm management: Make sure to put in an equal amount effort into this firm. This firm is a special privilege to work with and they work hard to make sure our time here is an experience to remember.

Pros: It was a pleasure and joy working with this firm. From large office, a supportive staff, and organized workloads, this firm is really on track with what makes a pleasurable work experience.

Cons: The workload is sometimes overwhelming, but it is not always like this. If you are able to find your rhythm and work flow, it is easy to overcome even the busiest of seasons

Advice to law firm management: Provide more opportunities for promotion. Keep on doing what you are doing.

Pros: This is a great opportunity for professional growth. Most of the attorneys are friendly. The management and team environment are great. The technology is good quality.

Cons: Management was disorganized at times. There are not very many opportunities for promotion.

Winston & Strawn LLP is an international law firm with nearly 1,000 attorneys among 15 offices in Beijing, Charlotte, Chicago, Geneva, Hong Kong, Houston, London, Los Angeles, Moscow, New York, Newark, Paris, San Francisco, Shanghai, and Washington, D.C. Counted amongst the best 50 law firm's of America, the firm serves a variety of clients, amongst them corporate giants, government agencies and others in practically every sector of modern law, ranging from modern law, from business financing, taxation, and antitrust matters to mergers and acquisitions and litigation. It counts amongst its clients such big names as Sears, Allstate, American Airlines, Bell Atlantic, Monsanto, and Abbott Laboratories. Winston & Strawn has built its reputation on the excellence and eminence of its lawyers, past and present, quite a few of them have attained legendary status in the American legal community. Its history of more than 150 years is a narrative of individuals and events that have helped shape the firm and create the strong foundation on which it continues to build. The firm sticks to its traditional values of client service, professional development, and community involvement instilled by its leaders of the past, while remaining open to the advances in legal systems in the modern world. Winston & Strawn opened its doors in 1853 under the leadership of Harvard grad Fredrick Hampden Winston. He was a Harvard Law School graduate. From 1853 to 1861 Winston was a partner of Norman B. Judd, a prominent Republican who nominated Abraham Lincoln to be the party's 1860 presidential candidate. Winston's second partner was Henry W. Blodgett, who left in 1870 to become a federal judge. In 1865 the firm gained its oldest client, the Union Stock Yard and Transit Company of Chicago and also represented three other railroads, reaping rich rewards serving the booming railroad industry as it consolidated after the Civil War and benefited from improved technology such as steel rails, air brakes, and refrigerated cars. In 1871 following the devastating Chicago fire that led to considerable re-building which in turn led to increased work for the legal profession, it further consolidated its position as a leading law firm. In 1878 Frederick Seymour Winston (F.S. Winston), the son of F.H. Winston, joined the law firm. The city of Chicago made F.S. Winston its assistant corporation counsel in 1881, and the following year he successfully represented the city before the U.S. Supreme Court in a case involving river access. It was the first case argued by a firm attorney before the Supreme Court. The key figure in the firm's history after the turn of the century was Silas Hardy Strawn, who was born in Ottawa, Illinois, in 1866. After graduating from high school, he studied law in an Ottawa office and in 1889 began practicing. In 1891 he joined the Chicago law firm and became a leading citizen of the city. He served as the firm's managing partner for 40 of the 52 years he worked there. Winston & Strawn had just 122 lawyers in two offices in 1978. By 1987 the firm had more than doubled in size and added new offices. In 1990 Winston & Strawn merged with yet another firm, Bishop, Cook, Purcell & Reynolds, based in Washington, D.C. That merger added over 75 lawyers who specialized in energy, environmental, international trade, legislative, litigation, and municipal solid waste issues. Like several other major law firms, Winston & Strawn suffered from the economic downturn of the early 1990s. Reportedly the firm laid off 44 lawyers between 1991 and 1994. Winston & Strawn added two offices in the 1990s. It opened its Geneva, Switzerland office in 1993, a city with few American law offices. Two years later it started its Paris office. Winston & Strawn in 1998 for the first time employed more than 600 lawyers and 'enjoyed the highest grossing year in our history,' according to the firm's Year in Review 1998. The Chicago mayor proclaimed December 9, 1998 as Winston & Strawn Day.

Winston & Strawn LLP practices law in the following areas and works with its clients to provide the best possible legal solutions.

The firm starts accepting resumes for its summer program in July of each year, with the interviewing process usually concluding in late October. Candidates are informed of the hiring decisions within two weeks of final interviews. Candidates are reimbursed for reasonable travel expenses for callbacks and full interviews.

The firm looks for students and lawyers with a strong balance of academic credentials and interpersonal skills. The firm believes that great legal solutions come from an ability to combine intellect with creativity and pragmatism.

The firm seeks attorneys who are smart, confident, and practical in their problem-solving approach, and who understand the importance of team work.

Winston & Strawn is committed to excellence in serving the public interest. It was one of the first large law firms in the country to adopt a written pro bono policy in 1991, to become a signatory to the Pro Bono Institute Law Firm Pro Bono Challenge, to establish a well-funded charitable foundation, and to hire a full-time Director of Public Interest Law.

When the firm celebrated its 150th anniversary in 2003, it asked every lawyer and paralegal in the firm to sign a Pro Bono Pledge to devote at least 35 hours to pro bono work during the year. More than 70 percent of Winston's attorneys signed the pledge. As a result, the firm has increased its pro bono hours billed by at least 15 percent every year since 2002.

Other notable recent awards include:

The latest edition of The Best Lawyers in America includes 86 Winston & Strawn attorneys in 43 separate categories. The listing is based on a rigorous national survey involving more than four million detailed evaluations of lawyers by other lawyers.

Winston & Strawn's George Lombardi, based in the firm's Chicago office, was named American Lawyer's "Litigator of the Week".

Winston & Strawn is ranked as having a top practice in 26 categories by Chambers USA 2012.

Winston & Strawn earned a 100 percent rating in the Human Rights Campaign's (HRC) 2012 Corporate Equality Index survey. This is the fourth consecutive year that the firm has earned top ratings.

The 2012 edition of The Best Lawyers in America includes 76 Winston & Strawn attorneys in 48 separate categories. The listing is based on a rigorous national survey involving more than 3.9 million detailed evaluations of lawyers by other lawyers.


Diversity and inclusiveness are core values at Winston & Strawn. Diversity involves a commitment to understand and value differences. It believes everyone benefits from a culture that recognizes and respects an inclusive workforce.

Winston & Strawn has a firmwide Diversity Committee that monitors the plans on an ongoing basis to regulate activities and enhance the firm's diversity-related efforts.

To encourage diversity within the law school pipeline, each year the firm awards multiple $10,000 scholarships to qualified students. Through this scholarship program, the firm strives to mentor and expand the law school minority population, and also interest candidates in working at Winston & Strawn after graduation.

To support the next generation of lawyers, Winston actively participates in pipeline programs providing internship opportunities to minority high school and college students, and hosting career events for young students. To help retain and mentor attorneys, the firm has developed and supported internal affinity groups for minorities and women, ensured that EEO and non-discrimination policies address gender identity and persons with disabilities, strengthened its formal mentoring program, and enacted a gender-neutral parental leave policy.

Many of the firm's partners and associates also have served in leadership capacities for other organizations, including the Black Women Lawyers Association, the Hispanic Lawyers Scholarship Fund of Illinois, the National Conference of Women's Bar Associations, and the Chicago Bar Association's Alliance for Women.


Each office of the firm develops its own summer associate program, which varies in terms of activities and hands-on training. Regardless of the office, the associate will have opportunities to learn about a wide range of Winston practice areas and the specialized skills each one demands.

Department Presentations allow summer associates to meet lawyers from specific practice groups who describe what they do in their daily practice. The 'Firm Highlights Lecture Series,' gives an inside look at some of the most publicized, interesting, and complex cases that it has handled in the past year.

It offers a Practical Training component in most offices that provides hands-on experience in drafting a legal research memorandum, negotiating a deal, drafting an IPO document, taking a deposition, and trying a case in a mock trial. Associates will learn from veteran Winston attorneys with years of experience and insight, who can make the law come alive through examples, personal experience, and anecdotes.

Working for the Winston & Strawn LLP


The firm's culture distinguishes it from other large law firms. It's a culture well-known for outstanding client service, superb legal work, ongoing professional development, and generous community involvement. At Winston & Strawn the atmosphere is professional and civic-minded-where a diverse and talented group of people can enjoy the practice of law and work in teams to serve clients.

The firm's standing, reputation, resources and culture attracts and retains some of the best lawyers in the profession.

Work will be in a collegial environment and new comers will be given a lot of responsibility early on, with tremendous visibility. The work is high-profile, intellectually challenging, interesting, and varied.

Working at Winston and Strawn will provide the associate an opportunity to work alongside ambitious, talented colleagues who are often amongst the acknowledged leaders in their field.

Winston & Strawn’s e-discovery group may lack glamour, but it is definitely justifying its existence as one of the fastest-growing department of the law firm....

International law firm, Winston & Strawn LLP unveiled their new branding strategy epitomized by the clean and modern design of their new website. A look at the ...

Earlier this month, Winston & Strawn announced the recruitment of a 10- attorney group of IP lawyers specialized in litigating technology patent cases before th...