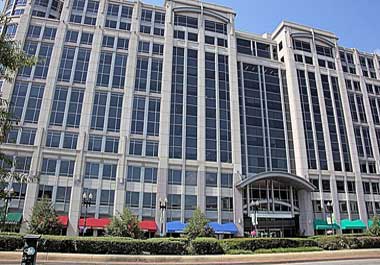 Finnegan, Henderson, Farabow, Garrett & Dunner LLP, commonly known as Finnegan, is the largest international intellectual property law firm in the United States. It is based in Washington, DC. Finnegan was founded on in 1965 by Marc Finnegan and Douglas Henderson in with a view to focusing only on intellectual property law. Finnegan has 375 intellectual property lawyers supported by about 600 professionals, including patent agents, legal assistants, and dedicated docketing, research, litigation support, and information technology specialists. With 45 years of experience, it has successfully been navigating the US IP law serving clients of all sizes and has the resources and expertise to formulate and execute global strategies. On behalf of its clients, it appears in courts throughout the US and before regulatory and administrative agencies in Washington, D.C. The firm’s professionals are multilingual and multicultural. Besides Washington, DC., Finnegan has offices in Atlanta, GA, Cambridge, MA, Palo Alto, CA, Reston, VA, Brussels, Belgium, Taipei, Taiwan, Tokyo, and Shanghai. The firm also has strong ties to the IP legal communities in Korea and India. The firm has a wide range of IP focused talent. It offers full IP legal service from electrical and computer technology, industrial manufacturing, consumer products, medical devices, and biotechnology to pharmaceuticals, chemicals, and alternative energy. Its areas of practice cover all aspects of patent, trademark, copyright, and trade secret law. Finnegan believes in its clients and protects them. Global leading corporations repose faith in its legal, technical, and scientific experience. Diversity is part of Finnegan’s culture. It is ranked as one of the top law firms for minority and overall diversity. The firm was recognized by the Women in Law Empowerment Forum (WILEF) as a gold standard firm in 2011 and 2012 as it integrated women into its highest leadership echelons. Its commitment to diversity speaks a lot about its culture in general. As a place to work, Finnegan has ranked on various Top 20 lists in the Avery Index. Finnegan & Henderson was founded in Washington by Marcus Finnegan and Douglas Henderson in Washington, D.C., in 1965 to do quality legal work focused exclusively on intellectual property law. In1968, the name of the firm was changed to Finnegan, Henderson & Farabow. Art Garrett became partner, and his name is subsequently added to the masthead in 1973. Marc Finnegan died in 1979 and Don Dunner became a name partner of the firm. It became the first patent firm to have opened its office in Japan in 1998. The firm opened its office in Brussels to cater to the needs of its growing European base. The Taipei office was opened in 2003 and its Shanghai office in 2008. The firm changed its logo and shortened name, Finnegan, came into being in 2008.

Finnegan looks for candidates with an aptitude for intellectual property law. Candidates with clear focus on IP are preferred to those indecisive about IP.

Finnegan firmly believes that diversity and inclusion play an important role in shaping the collective strength of a law firm. Its success and growth stem directly from its recruiting efforts, which include the active recruitment of minority and women attorneys. As a law firm focused on intellectual property law, Finnegan's recruiting goals are different from those of a typical general practice firm. An ideal candidate of Finnegan should exhibit not only excellent lawyer skills, but also a strong background in engineering or the sciences.

At Finnegan, pro bono work is for the good of its clients, its lawyers and staff, and its community. The firm believes that giving back is also an opportunity to receive knowledge, expertise, experience, and the good feeling one gets from helping others. Pro bono for the firm is a way of life; it is a state of mind. Its involvement is as varied and diverse as its professionals. It does not restrict its programs to just a few that the firm's top executives deem worthy. It wants its professionals to speak out about what is important to them and where they feel they can put in their best. Over 40 percent of its lawyers are actively involved in pro bono programs. Such lawyers are credited with 80 hours a year toward their billable hours' goal. Those who do more pro bono work are rewarded with credit bonuses.

Some think that a firm focusing only intellectual property is restricted to the type of pro bono work it can take on. It is not true. Finnegan professionals are intellectually curious and talented individuals who enjoy facing new challenges.

The firm handles highly complex IP matters for some of the world's largest companies and organizations and brings the same level of focus, skill, and commitment to get rewarding results. Its lawyers sharpen their skills by litigating criminal and civil cases, negotiating agreements and settlements, and working hand-in-hand with community non-profit organizations to address their constituencies' legal issues. Finnegan helps artists, children, the elderly, veterans, the homeless, and other groups in need that might not be heard without its assistance.

Finnegan is considered to be one of the nation's top law firms with respect to diversity. The friendly, collaborative atmosphere at Finnegan lends itself to welcoming many points of view. Differing views and abilities, which often result from diverse backgrounds, help make the firm a leader in its field.

Finnegan has a well-developed infrastructure and supportive benefits in place to increase recruitment, retention, and promotion of minority and women professionals. Finnegan's Diversity Committee is chaired by a partner who works closely with the Director of Diversity and Inclusion. The executive leadership of the Committee includes its Chair, the Managing Partners, the Executive Director, and Directors of Legal Recruiting, Marketing, and Human Resources.

Finnegan Summer Associate Program is designed to expose law students to the intellectual property law and to give an accurate idea of an associate's work at the firm. The 10-week summer program focuses on professionalism, training, and development.

The firm's Summer Associates have outstanding technical backgrounds in engineering and in the biological sciences, and are typically in the top 25% of their law school class.

Those who desire to take advantage of the Summer Associate Program should be from the top law schools in the country and they should be in the top 25 percent of their law school class. They should have outstanding technical background in a core science, engineering, or computer science, or significant experience in trademark/copyright matters.

Finnegan conducted on-campus interviews in 2012 at the following places:

There is no other place than Finnegan for lovers of IP law. You get substantive responsibility right from the start. In fact, there may be a little too much work for some-but high bonuses ease the pain of late nights. For starters working at Finnegan is really challenging. You will be working with some of the smartest IP lawyers in the country. Your experience will be with some of the biggest name brands in the world. Whether you are a green horn or a seasoned professional, you will grow intellectually, personally and professionally at Finnegan.

When top corporations need intellectual property work done, Finnegan Henderson is generally on the short list of firms considered. As a result, the firm is also...

Miller & Chevalier was founded as the first federal tax practice in the United States. Our Administrative and Tax Controversy practice solves clients’ most difficult problems administratively and in the courts. In the area of tax planning and consulting, we regularly handle all of the U.S. federal tax aspects of complex, multi-billion dollar, multinational transactions. In addition, we represent clients in complex tax policy matters. Our lawyers have a broad range of technical experience and i...