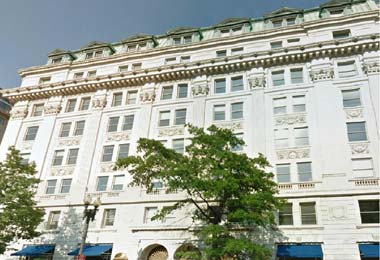 Pros: attorneys that I worked for were very pleasant

Cons: management and secretarial supervisor are horrendous, moral among the staff was lowest of any firm I have worked!

Partners to Avoid and Why: where to start?

Favorite Things About this Firm: Location near metro and restaurants

Advice to law firm management: Management needs to be reminded of the value of their associates and start incentive programs to make up for the long hours.

Pros: This firm offers a great deal of benefits to its new employees and is extremely competitive with its salary range and advancements.

Cons: There is fierce competition amongst the associates and new hires can easily be made to feel used and in most cases not wanted.

Miller & Chevalier Chartered. practices law in the following areas and works with its clients to provide the best possible legal solutions.

Miller & Chevalier recruits most actively from the top 15 to 20 law schools and it "definitely prefers the Ivy League." Because the firm's practice emphasizes litigation, writing skills are highly valued. One person advised that "because Miller is really bi^ on writing, make sure that your resumes and writing samples are letter perfect." On-campus interviews look to "winnow out" unqualified candidates, and thus tend to be substantive. Callbacks, however, are typically "more friendly and informational;" in the words of one insider, they are "far and away a 'glad to meet you' type of interview." Callbacks involve four one-on-one interviews with a variety of partners and associates, then lunch with two more attorneys. Afternoon interviewees are rarely invited to dinner; however, undecided candidates favored by the firm will be "wooed" with a dinner at a local restaurant. Candidates should be prepared to talk about "why they chose to be a lawyer, attended a particular school, and worked at different jobs." Friendliness, diversity, and humor are all important to Miller, but. showing a serious interest in one of the firm's limited practice areas is a candidate's linchpin. Because Miller is not a full-service law firm, an '"I don't know what I want to do when I group' attitude reflects poorly," we were told. Candidates were advised to study the practice group in which they are interested and to be certain that the firm actually offers that practice: "people at Miller become very upset when applicants state that they want to work in areas that the firm does not engage in-this is not a general practice firm," one insider observed.

In the past, any effort to perform pro bono work was "entirely up to the individual attorney at the firm," and such work tended to be oriented towards small cases, such as landlord-tenant disputes, immigration and asylum cases, and child custody battles. Miller now has a pro bono committee and, in April of 1998, the firm hired a part-time pro bono coordinator. "The quality and variety of cases may improve; it's too soon to tell," according to one insider. Pro bono hours are officially billable at Miller, but "in some practice areas they may not be given priority by partners," we were told.


Miller was described as "a good place for women," and a number of female attorneys have significant clout at the firm. Marcia Madsen heads the government contracts group, which has several other women partners including Mary Lou Soller, who was recently named as Miller's general counsel. Catherine Creech (tax) is on the executive committee ("a major achievement") and Patricia Sweeney (tax) is in charge of associate development functions firm wide. The litigation group does not have any female partners and has only three female associates; however, one person informed us that "I believe this is a coincidence, rather than an indication that the group is not female-friendly. It is definitely not the macho boys club that characterizes some firms' litigation groups." Although there has been "some grumbling" of late that there has been a "recent dearth of new partners being made and none have been female," our contacts agreed that women receive the same opportunities as men at the firm. Miller offers generous maternity and paternity leave programs, to which attorneys may tack on additional vacation time. We were told that one senior associate who is approaching partnership took off six months this year when his wife had a baby, and another associate at the same level also took off six months last year after she had her first child and is now working part-time. Miller does not offer formal daycare assistance, but there is an emergency daycare facility in the building. Miller does not have any minority partners, and minority associates are not well-represented at the firm. One contact informed us that "the firm is very unhappy about this" and wishes it were otherwise. Miller does have a diversity committee, and requires all of its attorneys to attend an annual diversity training program. In addition, the firm makes special efforts to recruit minority attorneys. Still, the firm reportedly has made no efforts to mentor its minority associates, and one source noted that "minority associates here lack partners as role models or a large minority community within the firm."


The summer program at Miller is "pretty well-balanced between work and play, with something social happening at least once or twice a week." One representative contact informed us that "my summer experience was very positive, with a lot of substantive work (and public credit from partners for doing it), a wonderful corner office, and an enjoyable time with extracurricular activities such as attending a professional tennis tournament, going to the D.C premiere of Apollo 13, going to a charity dinner at the National Zoo, seeing an Orioles game and dinner at the managing partner's house in Annapolis (and sailing on his boat). We also had several lunches a week at the office for summer associates and frequent lunch invitations from lawyers at the firm."

Working for the Miller & Chevalier Chartered.

WTO attorneys move to Miller & ChevalierDiversity in law firm must for growth...

From our inception in 1957 to the present we have focused solely on IP. We cover every aspect of patent and trademark law. We have obtained more U.S. patents than any other law firm in the world. We are always one of the top two firms in the annual rankings by number of issued patents. We provide counseling and opinions on the full range of patent issues in every technology from biosimilars to nanotechnology. Sughrue has been a leader in interference law for over 40 years and has earned an inter...