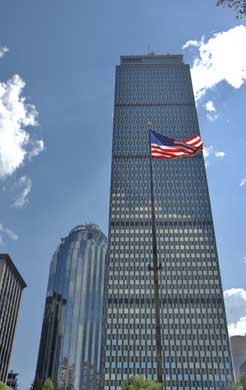 Advice to law firm management: The firm should focus on getting management training to handle difficult problems and issues. Members of the management team need to be more considerate of staff and employees. Management should take responsibility for issues and problems and deal with them and not try to blame employees and staff for them.

Pros: A law firm in which the environment is composed of pleasant and knowledgeable staff and employees. The firm offers benefits to those working in the firm.

Cons: The law firm does not do a great job in terms of how management handles difficult situations. Management sometimes does not take the responsibility for problems and issues that occur.

Pros: The firm has a decent variety of practice areas. Lawyers are top notch and talented. They have an international reputation. It's a prestigious firm to work for.

Cons: Be prepared to work many long hours. There is not a good work/life balance here.

Ropes & Gray is a leading global law firm with offices in Boston, Chicago, Hong Kong, London, New York, San Francisco, Seoul, Shanghai, Silicon Valley, Tokyo, and Washington, DC. Built on a foundation of over 150 years of dedication to forging strong client relationships, we represent interests across a broad spectrum of industries in corporate law and litigation matters. In addition, we offer counsel on labor and employment issues, tax and benefits, creditors'​ rights, and private client services. Our clients range in size from large to small companies and include financial institutions, government agencies, hospitals and health care organizations, colleges and universities, and families and individuals.

Ropes & Gray LLP. practices law in the following areas and works with its clients to provide the best possible legal solutions.

Joining Ropes and Gray for a legal career is considered a singular achievement in the legal world. The firm expects a strong academic performance at undergraduate schools and a demonstrated record of leadership, initiative as well as integrity. In all, the firm visited 28 law schools in 2011 and 5 job fairs for its hiring purposes. The firm usually chooses its candidates via campus recruiting and campus interviews. Some of the schools that are included in the firm's hiring itinerary are as below:

In addition to choosing candidates via campus interviews, the firm also selects from job fairs and consortia such as:

The firm appreciates hearing from qualified candidates who meet its criteria of hiring.

At Ropes and Gray, commitment to Pro Bono is the hallmark of the firm. It is engrained in the example that the firm's founders had set more than a hundred and fifty years ago. The firm's pro bono activities includes work such as securing asylum for immigrants in danger to helping people keep their homes to winning the release of the wrongly convicted and a host of other benevolent and altruistic activities.

In 2011, the staff of over 1,000 attorneys, paralegals, as well as summer associates donated over 98,000 hours worth of legal services. This is worth an estimated $42 million in today's expenses. Ropes and Gray was recognized in 2011 by the American Bar Association's business law section with its National Public Service Award, It is also ranked as #17 on the American Lawyer's prestigious A-List prominently due to its pro bono activities.

The firm's pro bono activities are wide-ranging and encompass a wide area of the law. Ropes and Gray actively demonstrates its ongoing commitment to public service. It actively encourages its lawyers to engage its pro bono work, which is equally valued for associate reviews as well as compensations. An active pro bono committee oversees pro bono activities at the firm. They identify probable initiatives besides nurturing and fostering the firm's pro bono program.

Legal Jobs in Boston and Near Locations


Ropes and Gray has built a reputation for high-quality work, a positive outlook, and the highest standards of service and ethics. It services have been recognized throughout the legal field in the United States as well as around the world. It has consistently won several accolades and rankings, some of which are mentioned below:

Ropes & Gray is highly ranked in several publications. Some of these publications include The Financial Times, Vault, U.S. News / Best Lawyers, Chambers and Partners and The American Lawyer.

In 2012, Ropes & Gray was ranked as the 25th most prestigious firm in the United States by Vault.

U.S. News / Best Lawyers named Ropes & Gray "Law Firm of the Year" for hedge funds for 2011-12. The firm also was named among the 20 U.S. law firms with the most top-tier national rankings in the "Best Law Firms" survey.

Directors & Boards magazine have named Ropes & Gray one of the top 10 U.S. law firms in dealing with general corporate governance issues in its 2009 survey of "Top Corporate Governance Law Firms.


Ropes and Gray believes that people should be hired based on their abilities alone. The firm hired its first Jewish lawyer Abe Berkowitz over 100 years ago in 1907. This was long before the other firms opened their doors to Jewish lawyers. The same can be said about employing women. In 1942, Ropes and Gray hired its first women associates Mary Lennon and Blanche Quaid.

The firm has set a precedent in embracing as well as encompassing all races, religions, genders, sexual orientations, as well as family structures. This internationally operating global firm truly believes that diversity is an integral part of their firm-wide focus across all their offices.

The firm is recognized as a leader in the area of diversity overall, as well as with respect to women, gay and lesbian candidates, and other minorities. The firm has won several accolades for its diversity efforts. It has earned the top rating of 100 percent for the Corporate Equality Index (CEI), which is an annual survey administered by the Human Rights Campaign Foundation. The firm was also recognized by the MultiCultural Law Magazine as amongst the top 25 law firms for Asian Americans.


Ropes and Gray has in place a distinctive and sophisticated summer associate program. Associates as well as those who have clerked a year after law school are assigned to a department beginning their first year at the firm. The firm tries to match individual associates with firm needs.

The firm also emphasizes the need for exposure to a broad area of practices in the early years of practice. The firm determines departmental assignments by balancing associates' practice areas with firm needs. Ropes and Gray actually believes in developing an exposure to a variety of projects as well as clients.

The firm has a low associate to partner ratio. This assures that each associate becomes responsible early during the summer associate program and works towards the advancement of its skills. Smaller departments utilize the services of the associates with the help of senior associates and partners during the early years of practice. Ropes and Gray ensures that new associates become involved quickly in their work.

Lawyers in their first year may make client contact usually in their first year. Litigators may also find themselves speaking at court or even at depositions during the first year. This is usually the situation with a pro bono case and transactional lawyers as they assume negotiating responsibility for certain agreements.

Working for the Ropes & Gray LLP.


Ropes and Gray is consistently ranked as one of the top law firms in the world. The firm has a collaborative culture, wherein associates are encouraged to take on interesting as well as challenging work across a range of leading practice groups throughout the United States as well as around the world. The buzz is that it is excellent to work for this firm, though it may be difficult to get hired initially.

The firm is consistently recognized and highly ranked for its corporate as well as transactional work in a range of practice areas such as M&A, finance, hedge funds, health care, life sciences, and many other areas. It has extensive litigation experience in the area of complex business litigation, securities litigation and regulation, government enforcement and white collar criminal and IP defense.

Working for Ropes and Gray is a great experience as it has been long recognized by associates as a great place to work. The firm demonstrates its commitment towards work by cultivating a culture of teamwork, partnership and mutual respect. Associates of the firm consistently give the firm a high mark in surveys that measure parameters such as job satisfaction, diversity, training and development, benefits, and the firm's billable hour policies. The firm has been ranked as No.2 by the 2012 Vault Guide and the firm has been ranked at the No.1 spot for the previous two years.

Ropes and Gray LLP is a leading and elite law firm with its offices all in key international cities around the globe. With over 140 years of dedication and comm...

Established in 1899, Peabody & Arnold LLP is one of Boston's oldest law firms and a leading regional firm with offices in Boston and Providence. We have attorneys who are admitted to practice in Massachusetts, Connecticut, Maine, New Hampshire, New York, and Rhode Island. We specialize in civil litigation and insurance services, including case strategy, discovery and motion practice, arbitration and mediation, trial practice, and appellate practice. We have some of the most experienced and ca...

Donovan Hatem LLP is a multi-practice law firm comprised of more than 35 litigation and general business attorneys serving a diverse clientele of public and private companies, nonprofit organizations, government entities and individuals. The firm provides the highest quality legal services, delivered in a responsive manner by attorneys knowledgeable of both their clients' legal needs and strategic business issues....

Mark Kwatcher has nearly 25 years of experience in the legal profession, he has been considered one of the nation's premier attorney placement specialists. With a track record of unparalleled success and customer satisfaction, Kwatcher offers both candidates (attorneys seeking placement) and employe...