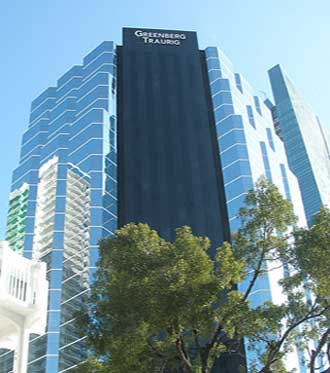 Advice to law firm management: GT is less of one firm and more of hundreds of miniture firms operating under the same name. Each practice group leader has so much atonomy, that associates in different groups have no consistent experiences. In addition, there is little to no firm culture, and in the absence of a firm culture, shareholders are able to manipulate associates by making unreasonable demands on their personal and professional lives for access to work and favorable reviews.

Pros: GT is a great firm to begin your career at. They staff matters very thinly, so you get thrown into the deep end very quickly. You learn at an advanced rate, because you are forced to in order to keep up with the work you are given.

Cons: Even if you do high quality work and produce high collections (and your reviews confirm such), moving upwards from junior or mid-level associate to a more advanced position is more of a game of politics and less based on the quality of your work or your production and numbers.

Partners to Avoid and Why: David Kurzweil and John Elrod - see associates as expendable cogs, not people to invest in the career of. They will not reward you for high quality work, but instead minimize your contributions to keep you from understanding your worth and take advantage of your abilities.

Favorite Things About this Firm: The staff are extraordinarily nice, and many good people work here, including staff and attorneys. However, these people tend to keep their heads down and must be sought out, because kindness is seen as weakness at the firm.

Miami-headquartered Greenberg Traurig LLP (also Greenberg Traurig, PA) popularly known as GT, is an international, full-service law firm having strength in real estate, litigation, corporate, and entertainment practices. It has close to 1800 attorneys serving through 35 offices located in the United States, Latin America, Europe, the Middle East and Asia. The team of lawyers provides counseling to its national and international clients on federal and state laws relating to regulatory compliance and litigation. GT stood tall amid the global economic downturn, and in 2010 the firm had a record year with its gross revenues climbing by 5% to over $1.2 billion. What industry insiders say about the firm is that it has a 'less bureaucratic,' 'less formal' atmosphere than many peer firms. However, there is a word of caution linked to it as many praise GT's 'entrepreneurial' and 'flexible' environment as good for 'self-motivated' associates, others see a cost attached to it with too much responsibility, with partners allowing associates to 'do anything, all by themselves, without regard to potential' consequences. But, GT still remains one among few law firms in the U.S. providing an attractive career path in the field of law with its diverse work culture and challenging environment. A statement of support by the company shows its commitment beyond the commercial interests. "GT is the first major law firm in the United States to adopt a statement in support of tribal sovereignty in its relationships with Indian tribes and nations. This statement outlines our dedication to the integrity of Native American and indigenous peoples and reflects the unique GT culture that helps set our firm apart." Today the firm is managed by notable names in the legal arena, Chief Executive Officer, Richard A. Rosenbaum; Executive Chairman, Cesar L. Alvarez; its President, Matthew Gorson; and its Chairman and Founder, Larry J. Hoffman. GT had initially had only one associate and one junior partner, and what's more, the firm had no plans of expanding outside the Miami metropolitan area. Founded in 1967 by Lawrence Hoffman, Mel Greenberg and Robert Traurig, GT today has strategic alliances at Milan and Rome. It was not before 1970 when attorneys Norman H. Lipoff and Albert D. Quentel joined with Greenberg, Traurig and Hoffman and also Former Florida governor Reubin Askew was a named partner in the early 1980s while he also sought the Democratic nomination for president. In 1991, GT began to expand nationwide, beginning with the opening of an office in New York City. The growth never took a halt for GT since then. In July 2009, it entered the London market, forming a new UK firm, operating as Greenberg Traurig Maher LLP. The firm now commands a good presence in some of the advanced countries.

Greenberg Traurig, L.L.P practices law in the following areas and works with its clients to provide the best possible legal solutions.

For those aiming to be a part of GT; top academic performance, business savvy, and proven leadership skills are the basic criteria to be fulfilled. The firm emphasizes training in not only legal skills, but also business and leadership skills, calling its lawyers "3-D lawyers." GT also recruits through law schools including University of Miami School of Law. "The need for lawyers to help clients navigate change continues to escalate. For GT, merging with other law firms to be in new markets overnight is not the way to respond to the market need. Preserving the firm's "built for change" culture is," GT believes. GT promotes entrepreneurial thinking, resulting in practical, business-focused legal services to its clients.

Among the notable pro bono activities by GT is its legal service to the One Laptop Per Child Association (OLPC), an innovative nonprofit organization, which offers children in the developing world a springboard to a brighter future by giving each child a rugged, low-cost laptop computer equipped with educational software and Internet access.

Another remarkable pro bono project by GT is to provide legal representation to children and young adults who are "aging out" of the foster care program in Palm Beach County, Florida and will soon be on their own. GT helps 16-to-20 year old foster care youths navigate the road to legal and financial independence, and secure opportunities that will lead to productive, successful futures.

Legal Jobs in Miami and Near Locations


GT has been recognized by many noted international law journals, bringing a unique distinction for the firm over industry peers. Working at GT also brings recognition to its lawyers and attorneys. Some of the indicative awards and recognition are as follows.

Has been ranked first in domestic presence (29 US locations) among the Top 10 law firms by The National Law Journal, NLJ 250, 2012

GT stands second for total number of US lawyers among the Top 10 firms, as recognized by The National Law Journal, NLJ 250, 2012

Ranked among the Top 3, International Law Firm of the Year, The Lawyer Awards, 2009

Named as USA Law Firm of the Year, Chambers and Partners, 2007


GT continues to foster diversity, and its commitment goes beyond any single committee - usually seen in a commercial firm. GT is the only Top 20 Am Law 100 firm with a Hispanic or African-American Executive Chairman. Also, it was one of the first Am Law Top 20 firms to have a woman chair its national litigation practice. GT helps today's lawyers become tomorrow's business and legal leaders, which means more business opportunities for everyone - the firm, its team and its clients.


At most of its offices in the U.S., GT offers eight-week summer programs with a target for the associates to complete 10 to 15 assignments over the course of the summer. Summer programs run through the normal working hours, usually means until 5:30 p.m. It also adds fun by hosting attractive lunches for the summer associates every week. In 2009, GT had extended offers to 76 % of its summer associates.

Working for the Greenberg Traurig, L.L.P


GT provides one of the most liberal and self-motivated working environment for young associates. The firm encourages its lawyers and attorneys to take up leadership roles at different level of profession, thereby bringing in more responsibility and expanding their horizons.

The firm has a hybrid staffing system, with some finding their own work through the free-market system and others getting assignments from an assigning attorney in their practice area or directly from one or two partners with whom they work exclusively. The other notable aspect is that the firm has no rotations, and associates are generally assigned to a practice area and specialty from day one, which is believed to make it difficult to change practice areas or groups later.

It may also be noted that in addition to annual performance reviews, associates also meet with shareholders to discuss business-related aspects of lawyering and their progress towards becoming a shareholder.

Shutts & Bowen is a Florida-based law firm with over 250 attorneys in seven offices in the State of Florida. From the time of our inception, we have dedicated ourselves to providing first-rate legal services, new and innovative approaches to problem solving, and the highest degree of professionalism and community service. Shutts & Bowen values its relationships with business and individual clients, as well as the relationships formed over the years with referring national and international la...

Berger Singerman is a unique Firm. We purposely limit our practice to areas in which our peers and credible third party evaluators recognize us as among the very best in Florida. We pride ourselves on our ability to deliver creative, effective and passionate client service to resolve any problem and to take advantage of any opportunity. In 2014, 2015 and 2016, we were named to National Law Journal's Midsize Hotlist, comprised of 20 national firms throughout the country. In 2015, we were honor...