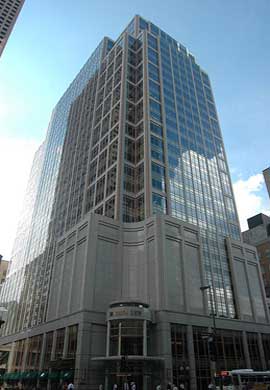 Advice to law firm management: Try your best and keep your nose to the grindstone. There is a lot of work to do but people will help out if you simply ask.

Pros: I was an intern at Dorsey & Whitney LLP for 6 months. I learned a lot of valuable knowledge and was able to get my hands on my first few cases.

Cons: It is very tough to get a permanent position here because nobody wants to leave. If you can get in the door, it's great.

Advice to law firm management: Although the firm is very large, management should highly consider restructuring the ""chain of command"" system. This system slows down work efficiency and I was very unhappy with it.

Pros: I was very pleased with the pay and benefits. This law firm is also great for networking and brand building.

Cons: The firm is very large and uses an extreme hierarchy based system. Also, if there are any problems, you have to go through the ""chain of command"" to get any solutions.

Dorsey is a business law firm, applying a business perspective to clients' needs. We make it our first priority to know the context in which you do business - your market, your competitors, your industry. Because we understand your business, you can rely on Dorsey for legal solutions that fit your unique circumstances. Leading companies think globally, and we understand the challenges and opportunities of the global marketplace. To compete around the world, businesses must enter new markets, establish joint ventures overseas, and navigate international law. With offices across the United States, Canada, Europe and the Asia-Pacific region, Dorsey offers access to native legal experience virtually anywhere in the world. We've earned our clients' trust because we understand that client service is a core value. In fact, our partnership began in 1912 to meet the specific needs of a prominent Minneapolis business. Quite literally, Dorsey exists to serve its clients. Companies turn to us because we understand how to manage even the most complicated legal matters. Our deep experience, supported by a formidable corporate infrastructure, allows us to resolve our clients' toughest projects: massive mergers, sophisticated contracts, complex litigation and more.

Dorsey & Whitney LLP. practices law in the following areas and works with its clients to provide the best possible legal solutions.

Campus Interviews were held at the following places:

Dorsey's goal is to continue its long-term commitment to serve the unmet legal needs of disadvantaged individuals, and of organizations that cannot pay for legal services, by providing a wide range of sophisticated, specialized and high quality legal services on a pro bono basis. Community is a Dorsey & Whitney core value.

The pro bono program of Dorsey enables its lawyers to help meet the great need of the disadvantaged in community for legal services. Pro bono gives its lawyers meaningful work experience, and it builds goodwill and satisfaction in the communities they serve. Pro bono binds the firm together.

In 1993, Dorsey & Whitney subscribed to the American Bar Association's Law Firm Pro Bono Challenge as a charter signatory. It exceeded the Challenge by devoting more than 3% of billable hours to pro bono every year since 1993.

In keeping with its ongoing commitment to pro bono and to encourage participation, Dorsey has hours and bonus polices for all of its attorneys. Dorsey partners receive billable credit for their first 50 hours of pro bono services they provide annually. The associate bonus policy counts up to 50 hours of pro bono time towards meeting the associate hours' requirement and once they have made their hours' requirement, an additional 100 hours of pro bono time will be counted in the calculation of their productivity bonuses. Further, it works with its contract, staff, and senior attorneys to include pro bono hours as part of their work arrangements.

Legal Jobs in Minneapolis and Near Locations


Dorsey is a recognized as an AMLAW 100 firm by American Lawyer Magazine and a Top 100 Most Prestigious Firm.

Since 1994, Thomson Reuters has ranked Dorsey in the Top 10 among U.S. law firms for the number of M&A deals completed annually.

In 2011, Dorsey was the Lawyers World Law Awards winner of the "Aviation Law Firm of the Year" award.

Working Mother magazine has recognized Dorsey & Whitney as one of 50 winning firms "notable for work/life and women-friendly policies."

Dorsey received Gold Standard Certification from the Women in Law Empowerment Forum in 2011.

Each year since 2006, Dorsey has received a perfect score from the Human Rights Campaign in recognition of policies and practices that promote a fair and open workplace for GLBT lawyers and staff.

Dorsey has twice been a recipient of the SAGE Best Practices award, given by the Legal Profession Committee of the Minnesota State Bar Association, which recognizes the efforts of law firms in the recruiting, hiring and development of women attorneys.

Dorsey has been awarded the Working Family Support Award in recognition of the Firm's vision and diligence in the work-family arena.

Dorsey was a 1993 charter signatory of the ABA Law Firm Pro Bono Challenge, which asks firms to contribute 3% of billable hours to pro bono work. Dorsey has exceeded the Challenge every year since 1993.

Dorsey was named 2011's Law Firm of the Year by Tubman, an organization in the Twin Cities that promotes safe and healthy families, individuals and communities through evidence-based intervention, prevention and education.


Dorsey understands the value of a diverse work environment and believes that such an environment adds to the success of its attorneys, staff, and clients. To put its views into practice, the firm has created a Firm-wide Diversity Steering Committee to make its global effort a success, and appointed at the individual office level a Diversity Partner to take care of local diversity efforts.

The firm is committed to providing each individual an equal opportunity to contribute and succeed at the firm. It believes everyone should feel at home and part of its community. One of Dorsey's greatest strengths is a friendly, cooperative culture that respects the individual and is knit together by its core values of clients, community and colleagues.


In 2013, Dorsey will have summer associate programs in Denver, Minneapolis and Seattle offices. Second-year law students may apply for 2013 summer associate positions online or indicate their interest in Dorsey through their law school's on-campus interview program.

Dorsey's associate program is designed to provide an opportunity for summer associates to experience challenging billable client work, be mentored by experienced partners and associates, and participate in social activities with its attorneys. In addition, summer associates take part in Dorsey in-house professional development service and work on pro bono matters of their choice.

Dorsey's 2011 summer program was ranked No.16 in the United States in the American Lawyer Summer Associates Survey, based on anonymous surveys completed by over 3,500 summer associates working at the top law firms in the country. The firm's Minneapolis program ranked No. 1 in Minneapolis for the third consecutive year.

Dorsey hires new associates directly from law school and following judicial clerkships. Most of its new associates are hired through its summer associate program, but applications from interested third-year law students or judicial clerks are accepted. The firm offers year-for-year credit (up to two years) for federal or highest state court clerkships; credit for other clerkships is determined on a case-by-case basis.

To apply for a new associate position, you may submit your cover letter, resume and copy of your law school transcript through Dorsey's attorney job openings page.

Working for the Dorsey & Whitney LLP.


Whether you want to help an entrepreneur enter the marketplace or you are interested in serving one of the Fortune 100 clients, Dorsey & Whitney gives you challenging assignments right from the beginning. You will get continual learning from a talented team of attorneys and staff dedicated to maintaining professional excellence.

Dorsey has wide experience, supported by a formidable corporate infrastructure and is capable of resolving clients' toughest issues like massive mergers, sophisticated contracts, and complex litigation and as such you will be exposed to all this and you will be able get yourself trained to handle any legal matter.

The firm combines dynamic and energetic atmosphere with congenial and supportive environment. You will get an opportunity to work in an atmosphere found in the largest firms, but in a smaller setting. You will be exposed to high quality work and given responsibility at an early stage. You get all the support necessary to become a first class lawyer.

International law firm Dorsey & Whitney LLP has announced the recruitment of real estate expert Eileen Roberts to serve as Senior Attorney in the Real Estate a...

Dorsey & Whitney LLP, also known as Dorsey, has been a trusted counselor to businesses and individuals for over 100 years. Started in Minneapolis, it has now of...

ALM's The American Lawyer has announced this year's recipients of the Lifetime Achievment awards and Walter Mondale is among the eight honorees. The award was d...

Robins Kaplan LLP is among the nation’s premier trial law firms, with more than 220 attorneys in seven major cities. Our attorneys litigate, mediate, and arbitrate client disputes, always at-the-ready for an ultimate courtroom battle. When huge forces are at play, major money is at stake, or rights are being trampled, we help clients cut through complexity, get to the heart of the problem, and win what matters most. We are clearly focused on business results for our clients. We achieve land...

The firm was founded in 1920 by Maugridge Robb, and was primarily an insurance defense firm. In 1930 the firm added two partners, and became known as Robb, Rich and Reynolds. The focus of the firm at that time was insurance defense, primarily the defense of civil lawsuits. In 1940, Francis VanEps and Bill Robb joined the firm, and the firm became know as Robb, Robb and VanEps. At the time Bill Robb joined the firm, the defense of workers' compensation claims also became a specialty of the fir...