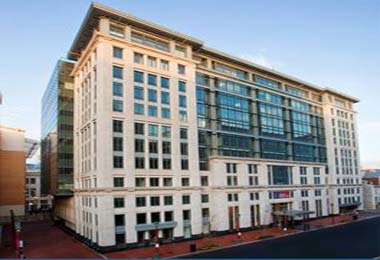 Pros: -People are honest, hard-working, and value each other as coworkers/colleagues. -There are extraordinary opportunities for employees to pursue professional development, client development, pro bono/volunteer work, etc. -Firm leadership fairly evaluates needs and takes action as appropriate. -A great work culture--there is a "one firm, one team" mentality!

Cons: There is nothing negative to note at this time.

Advice to law firm management: Get it together. People with actual job security perform a hell of a lot better and can bill more hours. Treat us like people.

Pros: The pay here is excellent. You are working for a very well established firm. You can really get some good, hands on experience here. Good diversity program.

Cons: The work tends be boring. Layoffs are a constant thing here. The only thing that matters are billable hours. Poor work life balance.

Eversheds Sutherland represents the combination of two firms with a shared culture and commitment to client service excellence. We are each known for our commercial awareness and industry knowledge and for providing innovative and tailored solutions for every client. Increasing globalization has changed the nature of business. It has also changed the type of advice our clients need. Eversheds Sutherland was formed with this in mind. As our clients expand globally, we are with them. Our lawyers around the globe are united by our vision, values and understanding of our clients’ businesses and their needs. They provide legal advice of the highest quality whether they are operating within country or across borders from our 62 offices in Africa, Asia, Europe, the Middle East and the United States.

Eversheds Sutherland (US) LLP. practices law in the following areas and works with its clients to provide the best possible legal solutions.

Eversheds Sutherland (US) LLP. follows the set of hiring criteria outlined below.

Sutherland initiated a long and distinguished commitment to pro bono and public service with our founding partners, Bill Sutherland and Elbert Tuttle. Tuttle took Johnson v. Zerbst to the U.S. Supreme Court in 1938. The case established that in the absence of a competent and intelligent waiver, the Sixth Amendment right to counsel in a criminal matter is absolute, and that a conviction obtained without counsel in such circumstances is void. Tuttle and Sutherland also represented Angelo Herndon, an African-American communist organizer who had been convicted of an "attempt to incite insurrection" in violation of Georgia law when he attempted to pass out communist literature on the Atlanta post office steps. After lengthy court fights, the U.S. Supreme Court declared the Georgia statute unconstitutionally vague and Herndon was freed from his sentence of 18 years on a chain gang.

Three Sutherland Partners Named "Lawyer of the Year," 83 Lawyers Recognized in 2015 Edition of The Best Lawyers in America (November 3, 2014)

Sutherland Named Both Onshore Law Firm and Tax Advisory Firm of the Year by Captive Review - Sutherland's Bruce Wright Ranked No. 8 in the Sector's "Power 50" (December 9, 2013)

Sutherland Named by Benchmark Litigation Insurance Firm of the Year for the Southern Region (February 22, 2013)

Three Sutherland Partners Selected as "Lawyer of the Year" by Best Lawyers (November 20, 2012)

Cynthia Krus Named "Community Leader of the Year" by Bread for the City (September 28, 2011)

Guide Lists Sutherland Attorneys Among the Best in the World (July 8, 2011)

Sutherland Partner to be Recognized by American Bar Association for "Distinguished Service" (May 6, 2011)

Sutherland Recognized as "Good Apple" Among Georgia Law Firms (May 2, 2011)

Sutherland's David L. Wochner Selected as One of the Best LGBT Attorneys Under 40 by National LGBT Bar Association (August 5, 2010)

Sutherland Ranks Among the Top Firms for Associate Professional Development, According to Vault Survey (August 26, 2009)

Vault Ranks Sutherland No. 20 Nationally for Diversity for Minorities (August 24, 2009)

MultiCultural Law Magazine Names Sutherland One of the "Top 100 Law Firms for Diversity" (May 5, 2009)

Thomas R. Bundy III Honored as Young Lawyer of the Year by the Bar Association of the District of Columbia (December 12, 2008)

Sutherland Attorneys Recognized by The Best Lawyers in America® (September 17, 2008)

Sutherland Ranks Among the Top Firms for Associate Professional Development, According to Vault Survey (August 21, 2008)

Sutherland and Attorneys Recognized in PLC Which Lawyer? Yearbook 2008 (March 7, 2008)

Sutherland Honored as Founding Funder of Georgia Appleseed Center for Law and Justice (May 9, 2006)

Sutherland Named One of World's Most Prestigious Law Firms (September 6, 2005)

Sutherland Attorneys Chosen By Their Peers as Best in America (October 15, 2002)

Dobbins and Wright Selected to Receive State Bar of Georgia's awards for Pro Bono Service (May 24, 2001)

Sutherland to Receive the Washington Area Lawyers for the Arts "2000 Wall of Fame Award" (October 31, 2000)


Sutherland's dedication to diversity is more than just words and numbers. It is an initiative that drives change within our firm-active change in our recruiting efforts, work-life policies and professional service. We understand the significant role a diverse community plays in our growth, development and service to clients.


You will work alongside our highly-regarded attorneys and serve dynamic companies and influential individuals, while learning our client service approach. Attending client meetings, hearings, trials, depositions and negotiations, you will receive hands-on experience complemented by our award-winning formal training programs. These opportunities build the foundation for a successful legal career at Sutherland.

Atlanta and Washington DC based energy law firm Sutherland Asbill & Brennan has ventured into the UK through a merger with London-based commodities boutique Arb...

Sutherland Asbill & Brennan LLP, abbreviated as Sutherland, is a law firm that works with companies in the United States and worldwide to provide business solut...

According to a study released by The Georgia Bar Association, sixty percent of Georgia's residents with low to moderate incomes will require advice related to c...