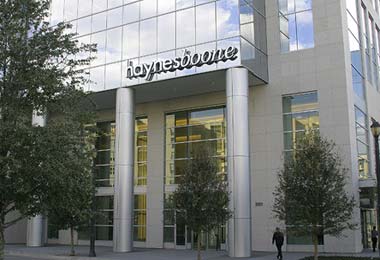 Ensure your staff is following up with customers and an absolute payment. If business for you is doing so well that you don't need my money...well then I am happy for you.

I attempted to contact Haynes and Boone in Dallas on multiple occasions to renew a patent and file 5 more patents and a Trademark. I sent 3 emails, I called 6 times and left messages 4 of the 6 times with my contact information. Since I never heard back from them, I went to their office and was "greeted" by 2 sarcastic employees at the front desk. I told them my intentions and gave them my contact information. After I expressed my intent one of their attitudes shifted slightly to a little more tolerable. I was told to wait in the lobby and someone would be with me soon. After maybe less than 5 minutes she informs me that I didn't have an appointment. I assured her that I was aware I didn't have one since no one ever bothered to reach out to me and wanted to schedule one. She then says I had to leave since I didn't have an appointment.... I requested someone reach out to me to set an appointment and she asks for my contact information. I told her to look in her left hand...where she had already written it down. Sarcastically she says, "aight". This was on May 5, 2022....today is June 1, 2022 and I have yet to hear from anyone.

there is a very good reason for your very high resignation turnovers.

too many lunches and event. almost every week

Haynes and Boone, LLP is one of the American Lawyer top 100 law firms, with more than 550 lawyers in 14 offices and 30 major legal practices. We are among the largest firms based in the United States. Our growth has been driven by our client service strengths, especially our problem-solving acumen and our ability to collaborate with clients. It is our mission to be a preeminent law firm that serves clients globally on sophisticated legal matters while maintaining a special culture founded on teamwork, a healthy work environment, and a strong work ethic. While every law firm believes culture is an important component of success, our culture is truly unique. Our culture is defined by our collaborative work environment and by putting the interests of our clients first. It focuses on teamwork, an environment of mutual respect, and a long-term view that supports investing in the future and the success of Haynes and Boone as an outstanding professional service institution.

Haynes and Boone, LLP. practices law in the following areas and works with its clients to provide the best possible legal solutions.

Haynes and Boone, LLP. follows the set of hiring criteria outlined below.

We recruit individuals who emcompass our vision of academic excellence, teamwork, diversity, and inclusion. We are dedicated to supporting, attracting, retaining, and promoting our lawyers.

Although we believe that all of our lawyers should make personal decisions about public service, we formed our firmwide Pro Bono/Public Service Committee nearly 20 years ago to coordinate pro bono legal work and other public service opportunities and match them to our lawyers and staff. The Committee includes associates and partners, and our encouragement of pro bono service is reflected in the fact that more than 70 percent of associates and nearly 40 percent of partners regularly undertake pro bono work.

Our goal is that each lawyer should aspire to at least 50 hours of pro bono public legal services per year - and our annual total of more than 11,000 pro bono hours is testimony to how seriously Haynes and Boone lawyers take the pro bono challenge.

We take these individual efforts seriously:

Our lawyers are all required to report their pro bono hours the same way they report billable hours
Pro bono time is viewed favorably in performance reviews
Every associate is required to handle a pro bono case as soon as they join the firm.

Haynes and Boone, LLP. Awards and Recognitions Write a review

Chambers Global 2014 recognized Haynes and Boone in the United States, Mexico and Latin America. Chambers recognized the firm's international franchise and distribution practice, the firm's U.S.-based bankruptcy/restructuring practice, and its Mexican bankruptcy and finance practices. The firm's corporate/M&A practice was recognized in the U.S., Latin America and Mexico. Overall, 13 attorneys were recognized.

Chambers Latin America 2014 honored Haynes and Boone lawyers and practices for the fifth consecutive year for its high-end corporate and financial work throughout Latin America and Mexico.

Chambers USA: America's Leading Lawyers for Business 2014 singled out 49 Haynes and Boone lawyers as leaders in their field and 17 Haynes and Boone practices. The firm's Bankruptcy and Restructuring and Franchise and Distribution practices were recognized in the national rankings.

In 2014, Vault's annual survey of the 100 largest U.S. law firms ranked Haynes and Boone in the top 25 nationally in seven of eight possible rankings, and the firm was Boone ranked no. 8 in Texas in the regional rankings. Haynes and Boone was the only Texas law firm ranked for Best Summer Associate Program.

For the second year in a row, the International Who's Who Legal: Real Estate 2014 authors determined that Haynes and Boone, LLP Real Estate practitioner Ann Saegert is the year's most highly regarded lawyer in its global legal ranking.

BTI ranked Haynes and Boone in the Celebrity category in its 2014 Client Relationship Scorecard, noting that "The Celebrities outperform nearly 80 percent of the market serving large corporate clients."

Seven Haynes and Boone, LLP lawyers from the Orange County and Silicon Valley offices were included in the 2014 Northern and Southern California Super Lawyers and Rising Stars award listings.

Texas Super Lawyers designated 32 Haynes and Boone lawyers as Rising Stars in 2014, up-and-coming attorneys in their field under the age of 40 or who have been practicing for 10 years or less.

Two attorneys were named Super Lawyers in Washington, D.C. in 2014 and two were named Rising Stars.

In its 2013 edition, The Legal 500 recommended Haynes and Boone for its M&A: Middle-Market and Real Estate practices, along with 15 lawyers from those practices.

Twenty-five attorneys in the New York office of Haynes and Boone, LLP were named outstanding attorneys by Super Lawyers and Rising Stars for 2013.

Haynes and Boone ranked in overall first place in Above the Law's 2013 "ATL Insider Survey," receiving a 9.5 out of 10, and placing first in Compensation, Hours, Firm Morale, Training and Culture & Colleagues.

World Services Group, an alliance that provides its clients access to cost-effective, efficient and highly skilled foreign counsel, named Haynes and Boone Partner Larry Pascal, co-chair of the International Practice group, its Member of the Year for 2012.

The Fort Worth office of Haynes and Boone was named one of the Best Places to work in Fort Worth, Texas Magazine, 2012.

The Dallas office of Haynes and Boone was named one of Dallas-Fort Worth's Best Places to Work by the Dallas Business Journal, 2009-2012.

Ten women partners from Haynes and Boone (the most of any law firm) were ranked among the 31 attorneys recognized in D Magazine's Best Women Lawyers in Dallas for 2010.

Haynes and Boone was named by clients and peers as a Go-To Law Firm for the country's top corporations by Corporate Counsel in 2010. The firm was cited for its representations in intellectual property, litigation and labor and employment matters.

The Houston office of Haynes and Boone was named one of that city's Best Places to Work by the Houston Business Journal in 2010.

Haynes and Boone was the first Texas law firm to be awarded Leadership in Energy and Environmental Design® (LEED) Gold certification for commercial interior design by the U.S. Green Building Council. The firm, achieving the recognition for its Dallas-based One Victory Park office in 2010, is also one of only a handful of law firms nationally to achieve the Gold interior designation.

Haynes and Boone received the 2014 M&A Atlas Award Cross Border Deal of the Year - $1-5 Billion for its role in Mylan's acquisition of Agila Specialties from Strides Arcolab.

Latin Lawyer awarded Haynes and Boone, SC its 2013 Restructuring Deal of the Year for serving as counsel to the consenting creditors in the groundbreaking bankruptcy case of Mexico's largest glassmaker, Vitro.

Latin Finance recognized the acquisition by Afore XXI Banorte of Afore Bancomer as its 2013 Domestic M&A Deal of the Year. The $1.6 billion purchase from Spain's Banco Bilbao Vizcaya Argentaria was the largest ever in Mexico's pension sector and helped position Afore XXI Banorte as a leader in the industry.

Our diversity and women initiatives encourage our lawyers to draw upon their unique experiences and backgrounds to develop their careers. Here are a couple of key facts about our lawyers: 1) our lawyers come from 45 states and 26 foreign countries, and 2) they speak 26 different languages, including Spanish, Russian, French, Portuguese, and Chinese.

We strongly believe that cultural and ethnic differences enhance innovation and the delivery of quality legal services to a diverse marketplace. Our beliefs are reflected in our attorney workforce (20 percent of our lawyers are of color and 30 percent are women), ranking us first among Texas-based law firms and well into the top third of the 250 largest firms in the U.S.

Karen Denney of Haynes and Boone, LLP, was recently named as the 2012 Outstanding Young Lawyer of Tarrant County. Denney, a partner in the firm's Labor and Empl...

Haynes and Boone LLP is an international corporate law firm with more than 525 lawyers throughout its 12 offices in Texas, California, New York, Washington, DC,...

Law students get offers for unpaid summer associates while LawCrossing finds 1,300 positions for them.

Law students get offers for unpaid summer associates while LawCrossing finds 1,300 positions for them....

For 125 years, Jackson Walker has played a vital role in the growth and development of Texas business. Since our founding in 1887, our attorneys have represented some of the most influential companies in the state in key industries that shaped the course of Texas history, including railroads, the media, and oil and gas exploration. Today, we remain firmly rooted in Texas, serving clients across the globe. Our commitment to those clients remains the same: to provide practical, effective solutions...

Enter your email below to follow Haynes and Boone, LLP.