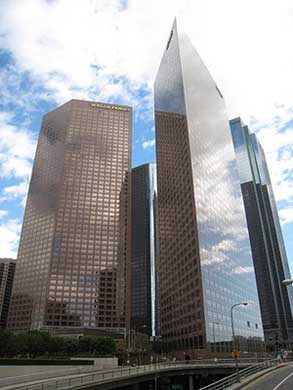 Advice to law firm management: There's not much advice you can give a firm this big and successful, but if I could stress one thing it would be to really try to get rid of the ""good old boy"" network and treat everyone as equals.

Pros: This firm is very large with offices all over the world, so you can work on a variety of cases and travel to a variety of places. You can gain a lot of knowledge through the training that they provide and you will gain more experience in more different areas than you could at a smaller place.

Cons: As with any big law firm there can be an established caste system of sorts that is very hard to break into for some. They are often more worried about the bottom line than doing the best work.

Pros: The people here are some of the greatest to work with. The benefits are also great.

Cons: The firm will work you until you can't work anymore. They don't care about individuals and forget that life exists outside of the work.

​From Southern California beginnings in 1890, Gibson Dunn has grown to a global law firm providing comprehensive services across borders, jurisdictions and legal disciplines. Our more than 1,200 lawyers are located in 20 offices in major cities throughout the United States, Europe, the Middle East, Asia and South America. We celebrated our 125th anniversary in 2015. We are known for excellence in the practice of law and are committed to providing the very highest quality of legal services. Representing our clients with passion and a drive to succeed, we combine a respect for tradition with a forward-looking emphasis on innovation. We are sought out for the exceptional creativity and problem-solving ability of our lawyers, who continually look for visionary solutions to our clients’ legal issues. We never give up, we originate novel approaches, we make headlines and we change the law.

Gibson, Dunn & Crutcher LLP. practices law in the following areas and works with its clients to provide the best possible legal solutions.

Gibson Dunn actively recruits highly qualified lateral associates for all of the Firm's departments and practice groups. New associates are taken on board very quickly to participate actively in case and deal management. Interested candidates can directly contact local office Recruiting Coordinator along with a cover letter and a resume along with a law school transcript. If there is an opening the candidate will be asked to visit the office for a brief day of interviews with partners and associates in the candidate's practice area.

Hiring decisions are made by the Firm-wide Hiring Committee based on input from the office involved.

Gibson Dunn is committed to improving the communities in which they work. Every year Gibson Dunn donates significant attorney time to pro bono work. The firm's attorneys are encouraged to participate in a wide range of matters; many of which benefit diverse communities. It has a longstanding and greatly valued tradition of service to the community. The firm believes that it is one way of repaying the community that has given it so much. Moreover, it says that its community service and pro bono commitment should be initiated by interested and committed associates and partners, not from any "top-down" directive from management. The Firm believes in and supports active associate participation in pro bono matters and gives one-to-one billable credit for pro bono work performed.

As part of its Pro Bono activities, Gibson, Dunn & Crutcher protected constitutional rights, worked to preserve historic buildings, battled slumlords, protected the environment, or facilitated adoptions and guardianships. They have always provided access to justice for those who could not otherwise afford it.


Gibson Dunn is known for its excellence and has been regularly ranked among the leading law firms in the United States as well internationally by all of the main reviewing bodies. The American Lawyer named Gibson Dunn the 2012 Litigation Department of the Year. The award marks the first time in the history of the competition that a firm has won twice.

In 2012 it received the Pro Bono Partner Award presented by Legal Services for Children for the exemplary work of Gibson Dunn's San Francisco and Palo Alto attorneys in serving low-income children in the Bay Area.

In the same year it received the President's Pro Bono Service Award presented by the New York State Bar Association for donating more than 37,000 hours of pro bono work in 2011 on a wide range of issues, such as good government projects, immigration, transgender advocacy, holocaust survivors and domestic violence.

In 2011 it received the Pro Bono Counsel of the Year presented by Legal Community Against Violence.

In 2010 it received the Beacon of Justice Award presented by the National Legal Aid & Defender Association for extraordinary commitment to pro bono legal representation in the area of immigration law.

In 2007 it received the President's Pro Bono Service Award in the large law firm category awarded by the California State Bar for Gibson Dunn's broad range of pro bono work throughout the state.

In 2006 it received the Outstanding Law Firm in Public Service presented by the San Francisco Bar Association.

In 2005 it received Law Firm of the Year presented by Public Law Center and the Guardian of Justice Award from the Legal Aid Society of San Mateo County.


The firm fosters a culturally fluent, inclusive and open environment that welcomes individuals from diverse backgrounds and with different perspectives to achieve Gibson Dunn's core values of excellence, fairness and individuality. Gibson Dunn understands that, given its global perspectives, it is crucial that they incorporate diverse competencies, experiences and viewpoints into their workforce. Gibson Dunn believes that diversity among its attorneys is essential to its continued success as one of the leading law firms in the world.

The firm maintains a two-tiered diversity committee system. The Global Diversity Committee oversees the firm's strategic efforts. Membership on the global committee includes Executive and Management committee members, partner chairs from each local office, partners representing the various affinity groups as well as the heads of the professional development, recruiting and diversity departments.

The diversity committees are actively involved in the recruiting efforts for summer and lateral associate candidates. They also serve as an important resource for their attorneys by providing their diverse and non-diverse attorneys alike a forum for addressing a wide range of issues involving diversity and work-life balance at the firm.

At law schools across the country, the firm encourages diverse law students to pursue a career at Gibson Dunn. It also provides them with annual financial support and mentoring through a variety of programs.


The firm offers 10-week summer associate programs in most of its domestic offices. It is widely appreciated by the participants who applaud its relaxed but hardworking culture and say that it is manned by people who are approachable and brilliant. Assignments are from the top drawer and many respondents say that they learnt more at the firm's summer program than they did in their two years of law school.

Work assignments include writing an appellate constitutional memo, proxy statement drafting, attending client meetings, and working on a pro bono trademark case. Attorney summer coordinators assign work, but summer associates can also seek work directly from partners and associates, and are encouraged to take assignments in a variety of practice areas. Summer associates are expected to complete six to 10 assignments over the course of the summer, and they typically bill about six hours a day working on assignments.


Gibson Dunn has a reputation as a conservative law firm. However, given that the firm is an assembly of more than a 1000 attorneys, spread over dozens of offices, all across the world, what identifies the firm cannot be clearly defined. Just as any other law firm, work is difficult and demanding, but the atmosphere is respectful and cordial and in spite of the strenuous demands of a law firm, associates call the atmosphere at Gibson Dunn, relaxed and laidback. If the applicants are seeking to join one of the best litigation groups in the country and looking for high-end corporate work, Gibson Dunn is the place for them. It is said that it is easier to get into the CIA than into Gibson Dunn as a lawyer - reason enough for the talented, the committed and the competent to be part of its work force.

Founded in Los Angeles in 1890, Gibson, Dunn & Crutcher, is a global law firm that is widely recognized as one of the most prominent and discerning in the natio...