Summary: There’s an inherent feeling among some that lawyers are habitually unfair and take advantage of their clients through high billing rates. Find out if this is true in your law firm by reading these 8 observations that outline unethical lawyer behavior. 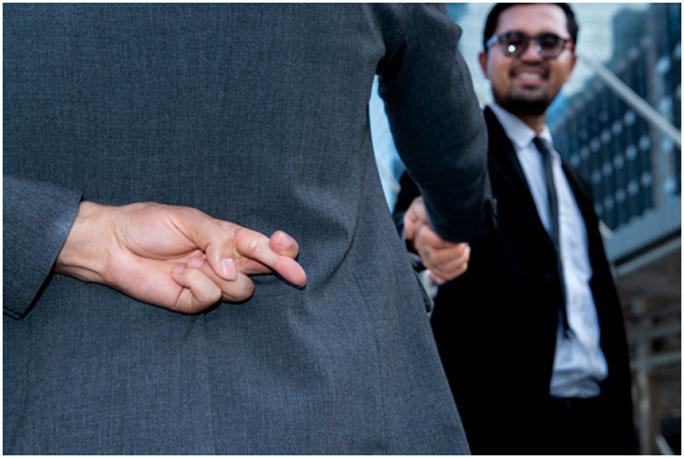 There are legitimate reasons why some people distrust attorneys.

For some, attorneys are like the old-school cowboys in black hats; they’re inherently bad and can’t in the least be trusted. They’re thieves and/or bandits. And if you come face-to-face with one, you may as well hand over your billfold before “the bandit” even opens his (or her) mouth to speak.

Now, honestly, is this a fair assumption not just of lawyers, but the whole of all legal services? No, it certainly isn’t.

Of course others will argue the rules of professional conduct and state that nothing good can come of a lawyer, particularly when that lawyer bills his or her clients for relatively uncertain work, if any work at all.

So the question is who do you manage? Lawyers who are client focused or who are inherently unethical?

If it's the latter more so than the former, then you need to learn the 8 most common ways attorneys can take advantage of and rip off their clients as was first published by Business Insider.com.

Double-billing occurs when an attorney bills two clients for the same hour of work. This is a dubious and questionable act which strays into the dark both legally and ethically.

The problem is double-billing isn’t in the least an uncommon action among attorneys and attorney fees.

In a survey from Samford University's Cumberland Law School more than one-third of American lawyers admitted to occasionally double-billing client. According to the study, the percentage of attorneys who believed that double-billing was unethical fell from 64.7 percent in 1995-96 to only 51.8 percent in 2006-07 even though the practice of double-billing has been condemned by the American Bar Association and most legal commentators.

Padding hours basically entails the excess billing of clients for hours not reflected in the attorney’s work.

Essentially, an attorney works for 90 minutes, yet bills the client for two hours’ worth of work. Or there are other cases when attorneys forget how long they worked and with that, will guesstimate the billable hours they will charge the client.

According to the Samford study, "a distressingly high percentage of attorneys believe that time-based billing results in bill padding and provides incentives for attorneys to perform unnecessary work."

Two-thirds of the respondents stated that they had specific knowledge of bill padding.

For example, an extensive Illinois hearing board investigation into the billing records of a lawyer at Mayer Brown found that he billed more than 150 hours during a two-week period in which he actually worked less than 50.

According to the hearing, the lawyer's routine was to arrive at the office around noon, stay until the other lawyers went home around 5 pm, and then go home himself soon after, all while claiming to stay at the office until late in the night. When he was in the office, investigators found, the lawyer made edits to documents at a rate somewhere in the range of one edit per hour.
Many businesses that make products for consumers tend to factor in certain expenses into their products’ final costs. For instance, a Ferrari is traditionally hand-built while a Ford is built by other machinery. This is part of the reason Ferraris on par are much more expensive than Fords.

As a consumer, you are paying for Ferrari’s overhead from subsidizing men and women to hand assemble engines, suspensions and transmissions. The interior seats are hand sewn as is the leather steering wheel.

The fact is you expect the Ferrari to beat out the Ford in retail price. But it does so for a reason, and being hand-assembled is a good portion of the car’s cost.
To that point, a law firm is not the same as the Ferrari assembly plant in Maranello, Italy.

Overhead in law firms can entail professional services such as paying paralegals and other legal staff such as a person to photocopy legal documents or a librarian to oversee the firm’s legal library.

Attorneys who include overhead charges such as these in their billing will without a doubt infuriate your clients, and might very easily jeopardize your firm’s relationship with them. So be aware of this lawyer-to-client billing infraction.

A client should never have to pay for the legwork that attorneys or lower associates initiate while representing that same client’s case.

To charge unnecessarily expensive bills for research, secretarial work, and other low-level tasks is akin to double-billing, particularly as these tasks would have to be done anyway.

If completing trivial tasks was part of a client’s billing cycle at one point, you as the law firm manager need to stop it right now simply because of its lack of ethics.

Nothing harms the attorney client relationship more than when the client finds out that part of the check he writes to his attorney each month is going to attorney expenses. These expenses can include:

None of this should be the client’s responsibility. Sure, a lawyer should have an office, dress professionally, and more than likely needs a car to drive to see clients or go to court.

But these are not by any means tasks the client should be concerned with. A lawyer needs to take care of his/her own personal duties on their own dime and leave the client out of it.

Do your lawyers really want to tick off your clients? Then charge them extra high rates just to see how long those clients stay as clients.

While law is fair by the virtues of the free market, four-figure hourly rates can nonetheless hardly be justified.

If your partners and associates are charging hourly rates that crack through the ceiling, just ensure that they are doing the absolute best they can for their clients.

Either that, or play it safe and get your lawyers to lower their rates.

High legal fees often seem like a rip-off, and once in a while, a judge agrees.

Your attorneys need to be representative of the amount of time their hourly billing reflects. They need to show that they are actively working on your clients’ cases to justify their billing.

Plus, depending on any given case’s complexity, your lawyers need to confirm that there is ongoing progress with the client cases. If not you can be certain that sooner rather than later, your firm’s clients are going to question the integrity and business sense of your legal establishment.

Anytime a client pays an attorney an upfront fee, that client may feel they have put themselves at risk of the lawyer who, now that they have the client’s money, may not fully devote his or her full ability to the client’s case.

This was a growing problem first learned about during the 2007 market crash in which there were a high number of foreclosure cases, many of them handled by attorneys who charged initial payments. In a typical case from that time, a woman paid a lawyer to arrange a modification of her mortgage.

Months later, her bank had not been contacted about the mortgage, and the lawyer had done his best to disappear, according to the Daily Business Review, though he was eventually arrested after receiving dozens of complaints related to negligence and abandonment.

At the end of the day, the practice of law should be held up as a responsible and very much needed profession that ordinary people (clients) can benefit greatly from.

And of the majority of lawyers who work within a wide array of practice areas, one can safely say that the crooked lawyers out there are far and few between.

Even so, lawyers and law firm managers alike need to be careful, diligent and efficient. One small mistake can cost your law firm the trust of one client, then another and another after that. And in your view, that should be no way in which a law firm manager runs a law firm.

Related Articles
Making the Most of Your Paralegal Training Program
Importance of Continuing Legal Education
Recruitments for Legal Firms by JAG
Client-Centered Presentations and Proposals
Identifying Contacts for Attorney Job Search
How to Create a Five-Year Career Plan
5 Aspects to Know About Litigation Law
Insurance Defense Firms & Fees
Cumberland School of Law at Samford University
The Law You Study: End of the Fantasy