There have always been law firm mergers, but this year brought the largest law firm merger (by headcount) to date, with U.K.-based Dentons merging with China's Dacheng Law Offices. The combined global powerhouse of "Dacheng Dentons" has 6,400 lawyers, offices in 50 countries, and gross revenue of $1.65 billion. 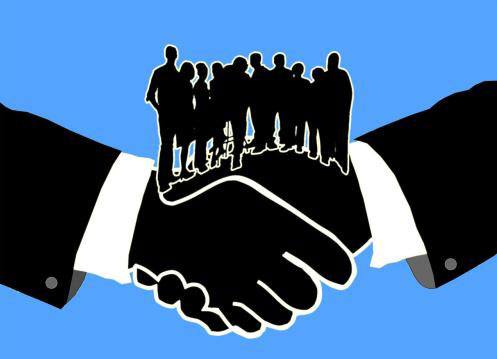 The world's second-largest firm by headcount is Baker & McKenzie, also an international force with offices in Saudi Arabia and Myanmar as well as more traditional venues. Baker & McKenzie has 4,300 lawyers and gross revenue of $2.54 billion.

Given the wave of mergers that has swept through the legal industry it is no surprise that Dentons itself a product of mergers. U.K.-based Denton Wilde Sapte merged with U.S.-based Sonnenschein Nath & Rosenthal in 2010 to form SNR Denton. Then, in 2013, SNR Denton merged with Canada's Fraser Milner Casgrain and the French firm Salans to form Dentons.

There are dozens of law firm mergers each year, according to a leading law firm consultant. The year 2013 had the most mergers in the past decade; with 88.The year 2010 had the least, with 39.

What's behind all these mergers? The main reason law firms team up with or acquire other firms is to grow and expand. Sometimes the main goal is to expand geographically into another country or region. Other times the primary reason is to expand into a new practice area or tap into a broader client base. There also are added benefits of efficiencies generated from economies of scale and well as opportunities to cross-sell more services to more clients.

The firm has stuck with the name K&L Gates but has continued to grow. It combined or merged with Dallas-based Hughes & Luce in 2008 (150 attorneys); North Carolina-based Kennedy Covington Lobdell & Hickman in 2009 (200 attorneys); Chicago-based Bell, Boyd & Lloyd in 2009 (215 attorneys); Australia-based Middletons in 2013 (300 lawyers); and Milan's Marini Salsi Picciau in 2013 (nine attorneys).

One of the main reasons law firms merge with other firms is to expand into international markets and capitalize on globalization and the cross-border deals it generates. A prime example is the Dentons Dacheng mega-merger, which is especially significant because Dacheng is the largest Chinese law firm and has offices and clients throughout the country. Contingents from both firms hope to benefit from the booming Chinese economy and the billions each year that goes into foreign investment into China and Chinese investments outside of China.

Observers speculate the combined firm may experience integration difficulties caused by cyber security issues as well as potential problems caused by Chinese law's failure to recognize the attorney-client privilege. However, the firm has a vested interest in getting over these and other hurdles considering China's Fortune Global 500 companies earned $5.8 trillion in revenues last year.

The combined firm is structured as a "verein," a loose association that allows profits to be separated by regions but branding and other functions to be consolidated. Baker & McKenzie and other multinational firms also use the verein structure.

The first transatlantic law firm merger occurred in 2000 between New York's Rogers & Wells and London's Clifford Chance. As is the case in many mergers, the combined firm kept the U.S.-legacy name for a few years but has gone by Clifford Chance since 2003. Clifford Chance is one of the world's largest law firms with 36 offices in 26 countries.

Not all law firms have global ambitions (at least for now). Sometimes regional U.S. firms opt to team up with each other so they both end up having a national presence. That's what prompted the sixth largest merger of 2007 between Chicago's 200-lawyer Gardner Carton & Douglas and Philadelphia's 445-lawyer Drinker Biddle & Reath. Both firms wanted to become national players, especially in the healthcare sector where they both had strong practices. Today, the combined firm (which goes by Drinker Biddle & Reath) has 60 lawyers dedicated to more than 700 healthcare clients in 45 states across the country as well as many other lawyers handling other matters.

Sometimes a firm has a desire to expand into a particular region and type of practice associated with that region. The firm can start from scratch or, as was the case with Goodwin Proctor's acquisition of Shea & Gardner in 2004, the firm can acquire a going concern with the desired attributes. Boston's Goodwin Proctor had 500 lawyers and a thriving practice but lacked a robust "Washington" practice with regulatory expertise and ties with government. Goodwin accomplished its objective by combining with Washington, D.C.'s 73-lawyer Shea & Gardner, a "Beltway" firm with established infrastructure, employees, relationships and expertise.

Similarly, when Atlanta-based Alston & Bird decided to develop a presence in New York City in 2001, it merged with 54-lawyer Walter, Conston, Alexander & Green. Alston & Bird wanted a platform to better service existing N.Y.-based clients such as American Express, Bank of New York and Citigroup and also wanted to enhance its financial services practice. From Walter Conston's perspective, the combination would allow it to better serve its clients by offering them additional services and specialization.

When Atlanta-based McKenna Long & Aldridge wanted to expand into California it combined with San Diego's Luce, Forward, Hamilton & Scripps. The 2012 merger allowed McKenna to add six California offices, over 100 lawyers and an aerospace practice that aligned with McKenna's longstanding work in government contracts. (McKenna recently announced it is merging with Dentons and will soon become part of the Dacheng Dentons behemoth.)

Sometimes a firm is inspired to merge with another firm because it wants to grow by adding new practice areas and client bases, as happened with the 2001 merger of Chicago-based Sidley & Austin with Wall Street powerhouse Brown & Wood. Sidley had expertise in corporate transactions and corporate clients, but lacked expertise in sophisticated financial and securities transactions and a financial institution clientele. Brown & Wood offered what Sidley needed, given that Brown & Wood was a go to firm for underwriters and top player in securities deals, including cutting-edge securitizations and derivatives transactions.

The combined firm, now known as Sidley Austin, ranks as the sixth-largest U.S.-based law firm. It has nearly 2,000 lawyers and offices across the world and is consistently ranked high in the securities and capital markets area.

Acquiring Lawyers Without the Firm

Law firms don't always expand by acquiring or merging with other firms; sometimes a firm acquires a contingent of another firm's lawyers, but not the entire firm. For example, in 2003, Jones Day hired nearly 100 lawyers from the dissolving boutique New York-based IP firm of Pennie & Edmonds. Jones Day already had a significant IP practice, but the addition of the Pennie lawyers enabled Jones Day to expand into transactional IP work as well as into biotechnology and pharmaceutical work.

Many law firm mergers are successful, and experts emphasize the need for careful planning and structured integration in order to get the best outcome. The Drinker Biddle/Gardner Carton merger succeeded because both firms took the effort seriously, shared a common healthcare-emphasis goal, shared a "client first" ideology, and kept in place the "the best" of each firms' practices. The combined firm kept Gardner's talent-development program for young associates and Drinker's practice of recognizing attorney and employee birthdays.

Not all mergers end up happily for everyone, of course, and it is not uncommon for partner and attorney departures to coincide with consolidations or for layoffs to follow them. As many as 19 attorneys left Luce Forward before its merger with McKenna, including partners who went to Jones Day and Pillsbury. Other former Luce Forward attorneys appear to have been laid off in the aftermath of the merger.

Other Mergers and Consolidations

Law firms that have merged or been absorbed are:

Given recent stats on mergers and the culmination of the recent mega-merger forming Dacheng Dentons, it appears the law firm merger trend will continue into the future. Firms will continue to use merger and consolidation as a vehicle to expand into new markets, regions, practice areas and client bases.