Demonstrated Methods Of Studies To Ensure Success At Law School

Share
Tweet
Linkedin
714 Views
( 99 votes, average: 5 out of 5)
What do you think about this article? Rate it using the stars above and let us know what you think in the comments below.
Often, new attorneys set their sights on a very specific career goal: becoming a partner in a law firm. Frankly, the ability to even begin setting goals shortly after completing law school and passing the bar certainly is a miracle unto itself. The fact is that while we learn how to read, analyze, and argue the law, we don’t really learn how to be a lawyer. One of the things that most lawyers learn the hard way, particularly in law firms with a partnership track, is that even as a junior associate, you’re expected to hit the ground running and to know what you’re doing. As far as the higher-ups are concerned, you came from the attorney factory and you’re fully equipped to handle whatever they throw at you, including long working hours, handling the stress of billable hours, and getting the work done the right way (which means their way) without asking  too many questions. To some degree, this mindset has changed some with certain law firms embracing mentorship programs to help new associates improve and perform better. But we all also know that, as a whole, our industry is very slow to embrace change. (We’re still holding out hope…) 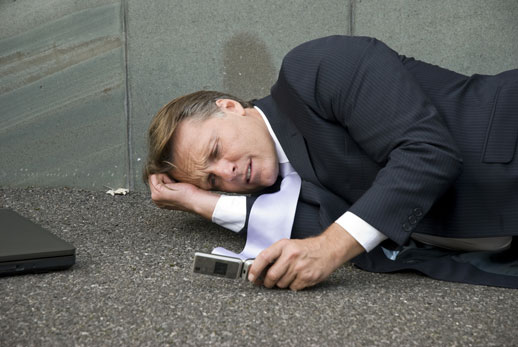 I Walked the Road to Partnership…and I Was Miserable


Law firm partnership is certainly a career path that still exists, but it’s romanticized into what amounts to money, power, and perhaps even some notoriety. Oh, sure, it’s alluded to that there are late nights grinding away in the office with cold, greasy takeout stagnating on the corner of your desk in a Styrofoam container, but it doesn’t even come close to highlighting the actual blood, sweat, tears, and misery that must be endured to stay on the partnership track. I know. I pursued it for a while. And it made me into a miserable human; and so eventually, I decided to reassess what I wanted out of my career.

One of the most defining hardships that I endured while walking the road to partnership was the rejection and judgment that came with asking questions at the law firm in which I worked. What specifically comes to mind is a time when I completed approximately half of a legal document and presented it to the partner who supervised me. Now, I also explained to the partner that I was not finished. I wanted to show him what I accomplished and ask a couple of questions that would help me produce the best possible version of the document. Seems reasonable since two of the (many) ethical rules that lawyers must follow include diligence and competence. Instead of getting answers to my questions, the partner treated my half-finished document as completely finished, chastised me, ignored my questions, ripped the case out from under me, and assigned it to someone that he felt was “more capable.”

While that wasn’t the only time something of that nature happened to me, it was certainly one that remains burned into my memory. And I came up with a plan to avoid interacting with the partner unless necessary. I took my questions to junior and senior associates who I hoped had more knowledge than I did, I worked even crazier hours, and I only took my work to the partner when I was positive that it was as pure as the first driven snow in the wilderness of Alaska that remains untouched by humans.

And if you think about it, that really didn’t do anyone any good. I was miserable. I figured the partner hated me and that I would no longer ever stand a chance at becoming a partner. I worried more. I learned first-hand that the partners seemed to remember mistakes far more than they showed their appreciation for dedication or hard work.

I’m nothing if not honest about how this entire experience affected me. I’ll give you some of my key takeaways, but it’s important to note that I only discovered those after I was able to put both distance and time between that entire experience and myself.

Before I finally had that time of separation from the experience, all of that stress and agitation of worrying about what the partner would think, if I could get the right answers, and thinking that if I worked myself to actual death that it would make a difference made me act out as a misearable human. And I was a miserable human for quite a while.

Decades ago, we didn’t have Siri or Bixby or Evernote. If you wanted to record your thoughts, you kept a small recorder with you…the kind that required an actual tiny cassette tape. Yes, that’s right – before digital recorders existed. Because I worked so much, I was in the habit of keeping a recorder with me all the time. It fit in my pocket. One day, I went to the grocery store. As fate would have it, when I came out, the car that was parked next to me was gone, but they left a memento in the shape of a dent in my door. I was livid. So what did I do? Every time I drove somewhere from that point on, I used the recorder to document the license plate numbers of any car that I saw parked next to me. I was genuinely disappointed when there were no more dings in my car for me to follow up on since I had the information. If that’s not crazy enough, let me tell you something else I did while under the extreme pressures of the partnership road.

I was late for my flight. This was still in the days of small recorders which means it was also pre-TSA. You didn’t need to get to the airport ridiculously early to ensure that you made it through security and onto your flight. No, I was just late. And the plane had just left by the time I got to the boarding gate. I broke out my recorder and I started yelling at any airline employee I could find. I demanded their names and their statements. And I even had the nerve to demand to know why the flight left early. It hadn’t really left early, but I already told you I had started to become a miserable human because of the stress. I bullied them into the plane turning around so that I could board. And it worked. I am not proud of this behavior.

Key Lessons: What I Learned from Braving the Hardships on the Road to Partnership

I learned that not everyone is easy to work with. Looking back, I can’t tell you if the partner and I had a clash of personalities or if the partner treated everyone that way. I was far too absorbed in trying to be the best lawyer I could with hopes of one day being thought of as partnership material. If you’re going to pursue partnership, you must be able to handle all kinds of personalities, including difficult partners or other associates who may have it in their plans to try to make everyone else look bad. That’s just part of life.

I learned that not all of us are suited for the partnership track and that’s okay. Partnership is often held out as this epitome of success. If you make partner, you’re somehow pristine…a shining example of success. And it certainly is a laudable achievement. But the stress, work, and other hardships involved aren’t for everyone. And that’s okay. Success as a lawyer can take many shapes. It’s also highly personable. You can be a successful lawyer whether you decide to become a partner, start your own firm, or never earn that partnership title.  You can be a successful lawyer who decides partnership is not the goal so you may spend more time with your children. You can be whatever kind of lawyer you want as long as it makes you happy and meets your needs as a human. That is what defines success as a lawyer.

I learned that I needed to not treat everyone around me as if they were there solely for my benefit. Remember my story about how I started recording the license plate numbers of cars near me in the parking lot and how I was disappointed I never got to use that information? Remember how I bullied the airline staff after I was late so that I would get my way? Those certainly aren’t shining examples of how I ever want to be remembered. After I was able to put some distance between myself and the stress I was under, I was able to take stock and recognize that the people around me weren’t there to cater specifically to my needs, and that they were all entitled to be treated with the same amount of decency and respect I wanted from the partner. In short, I had become the partner…but not in the way that boasted of success. I had, instead, turned into an oaf.

And that’s really the point, isn’t it? That young associates who want to become partners hope to be seen as eventual equals, but at the very least, they should be treated with respect. Because that’s the only way we retain the humanity and decency in the field of law: by example.

it is easy access to lots of jobs.
Heather