Share
Tweet
Linkedin
755 Views
What do you think about this article? Rate it using the stars above and let us know what you think in the comments below.
Summary: Regardless If your legal interests involve families and how they grow together or apart, you should possibly look into family law as a potential practice area. 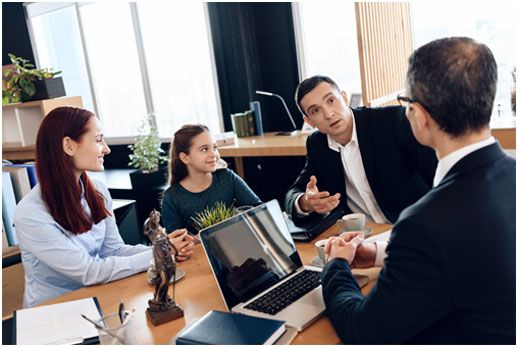 What is family law?


According to Legal Career Path.com family law is an area of law that addresses family relationships.

The family law practice field includes creation of family relationships through adoption or custody and breaking those families through divorce and termination of parental rights.

Decidedly, because family law is the practice of law that involves relationships and children, it can also be one of the most emotional areas of law.

What is a family law attorney?

Attorneys who practice family law work in small and large firms. Yet at the same time, family law is a practice that is also compatible with solo practices.

In short, family lawyers are involved in very personal aspects of their clients’ lives, making it a very emotional branch of the legal system.

A family law practice may involve any of the 7 following topics:

Divorce is the process of breaking the bonds of matrimony.

It should be remembered that marriage is a contract, and that when parties get married, they form a legal relationship in the eyes of the state.

When the parties no longer wish to have this relationship intact, they must file court papers in order to ask for a divorce.

Of course, the rules for a divorce vary depending on the state where it’s filed. So if you plan to practice in more than one state as a family law, you will need to familiarize yourself with the divorce laws in each state where you practice.

While all states allow for no-fault divorce, some states require a period of separation. Most states have a residency requirement in order to prevent parties from shopping for the state with the best law.

Each state has their own guidelines for how to divide assets and debts in a divorce, but the rules are similar in all states.

In most cases, the court looks to make an equitable division of the assets. That means each spouse will get half of their shared assets, though this doesn’t necessarily mean everything is divided evenly with all divorces.

The court can look at things like the parties’ contributions to the marriage, the length of the marriage and the needs of each party after the divorce, which usually involves alimony.

Misconduct such as infidelity or domestic abuse can also play into the court’s decision.
Alimony and spousal support can be two of the most contentious aspects of a divorce.

Some states use a formula in order to determine the amount of support. In other cases, it’s left to the judge’s discretion.

In cases where the court uses a formula, it’s still important to make sure that the court uses the proper inputs in order to arrive at the correct amount of support.

The length of a marriage is one of the considerations for spousal support. It also depends on a partner’s ability to pay and levels of jointly-accumulated debt.

The court also looks at the age of the parties and whether they can work.

Family lawyers who specialize in divorce also consider the misconduct of either party. Family lawyers work to present evidence of these factors to the court in order to ask them to reach the best result.

The Legal Career Path.com states that there are some things that can’t be included in a prenuptial agreement like child custody and child support agreements.

Otherwise, the parties can create an agreement that outlines things like separate property, distribution of the assets and spousal support in the event of a divorce. When the parties enter into this kind of agreement after they get married, it’s a post nuptial agreement.

Child custody remains one of the most debated and contested areas of family law. As a family lawyer, you will find that most states decide child custody and parenting time based on the best interests of the child.

In the event of child custody, the court considers the following characteristics of a pending divorce such as:

If parents agree on custody, the court order usually follows the agreement. If the parents can’t agree, family lawyers present the evidence to the court about the child’s best interests.

This can involve presenting school records, testimony of a psychologist or substance abuse counselor, criminal records and even medical records.

Most states divide custody into legal custody and physical custody.

Physical custody and legal custody can be shared between the parties, or the court might award primary custody to one of the parents. It’s also possible to share one type of custody without sharing the other.

Family lawyers must understand how the courts determine custody in their jurisdiction. There are slight variations between states, so family lawyers need to learn the law that’s specific to where they practice.

Children have the right to support from both of their parents.

The goal of child support is to provide children whose parents live in separate households the same financial resources that they might have if both parents were still married and living under one roof.

Many courts presume that the parent who cares for the child also provides support to the child.

Child support is largely determined by formula. Each state has their own formula for making child support calculations.

Most courts’ formulas consider each parent’s income, allowable tax deductions and other expenses, such as a child’s health insurance expenses and whether they have child care needs.

Some states also consider the amount of time that each parent spends with the child, though not all states take parenting time into account.

In the event that one or the other parent attempts to hide income or is voluntarily unemployed or underemployed to gain more alimony, a family lawyer can help their client show the court the entire circumstance.

A family lawyer also reviews the calculations of the court to make certain there aren’t any computational errors that could result in an inaccurate child support award.

Once the state believes a parent isn’t able to appropriately care for a child, they might initiate abuse and neglect proceedings. In this scenario a family lawyer may represent a parent accused of abuse or neglect. In other cases, a family lawyer can even end up representing one or several children.

When family lawyers represent clients in abuse and neglect proceedings, they work to help their clients either defend against allegations of abuse or neglect, or they help their clients comply with services and other requirements in order to regain custody of their children.

Either way keep in mind that the standard for terminating parental rights is very high in most courts.

Conclusion: Why become a Family Lawyer?

It’s critical that individuals in family law cases have skilled, compassionate attorneys that can advocate for their best interests effectively. Family law is a practice of law that’s critically important to clients who need the services of a family lawyer.

This is what makes the family law practice such a viable choice for attorneys who feel they can positively advocate for any family and their members. These type of lawyers typically enjoy interacting with people.

Family law is also advantageous if you want to practice in one geographic location, in which you only need to visit a handful of nearby courts.

In most cases, family law is routine and dependent upon facts. As a family lawyer, you’re likely to spend a good portion of time gathering evidence to show the court how the facts of the case can apply to well-established law.

For an attorney who enjoys presenting arguments to the court on the behalf of a family member they are representing, family law appears to be the perfect practice field.

Family Law Attorneys: In Your Experience, Who Pays More for Divorce - Men or Women?
The history of Attorneys and having a Family Attorney
How to Become a Common Pleas Court Judge in Ohio

LawCrossing is like a miracle to me as I found my dream job right here. Thanks LawCrossing!
GEORGINA