Share
Tweet
Linkedin
2363 Views
What do you think about this article? Rate it using the stars above and let us know what you think in the comments below.

Summary: More and more attorneys are looking at small firms than ever before after they graduate from law school.

Find out what they have to offer in this article. 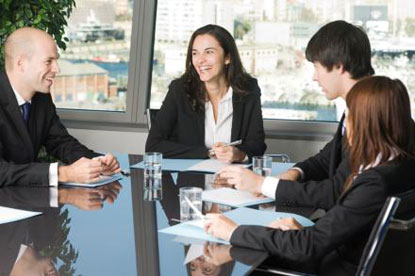 Susan Woodward interviewed at large firms before graduating from the University of Georgia School of Law last year, but she ended up joining a small firm in Rome, Ga., because it gave her the greatest opportunity for professional growth and hands-on lawyering.

"I wanted to go someplace that I would really be able to soak up as much experience as I could without being thrown totally to the wolves," she said. "I really think I stumbled across a diamond in the rough."

Woodward, 27, is among a growing number of recent law school grads eschewing the big salaries and fancy perks of large firms for small firms where they can flex their newfound legal muscles.

According to the National Association of Law Placement (NALP), small firms provided the majority of law-firm jobs taken by recent graduates.

In the past several years, the percentage of law school grads taking jobs in small firms has risen steadily (though modestly), while the jobs taken in large firms have declined at a corresponding rate. This is a reversal of a steady increase in employment in large firms during the boom years.

Although concrete figures are hard to come by, several experts said that smaller firms have proven more adept at weathering the economic downturn.

Smaller firms, because they hire more judiciously and they're not growing like wildfire, are rarely subject to hiring manias. They've been more steady than larger firms.

Smaller firms are used to changing gears quickly, which makes them more adept at adjusting to changing business conditions. They can respond more quickly. They don't have to go to four committees to refocus their emphasis on more profitable practice areas.

Also, smaller firms are less likely to have invested heavily in practice areas that have been hit hard by the recession, such as mergers and acquisitions or financing Internet startups.

During a recent panel discussion about small-firm job searches at Boston University School of Law, several small-firm lawyers said their firms have withstood the economic downturn.

In difficult times, people have less money to spend," said Steve Cohen, a partner in a four-lawyer firm in Boston. "But I do litigation; I'm not a luxury. If someone comes to me, it's because they need to sue or they're being sued."

Sean Jackson, who co-founded a two-attorney Boston firm last year that specializes in business and commercial law, noted that smaller firms typically charge lower fees than larger firms, which makes them attractive in the current economy.

"In a down economy, consumers and businesses often turn to a small law firm as an alternative," he said.

Experts say that the decline in employment opportunities at large firms is causing some new lawyers who might have focused on big firms in the past to seriously consider taking a job at a small firm.

As the market has contracted and larger firms have cut back in the hiring of summer associates and third-year law students, these students need to expand their horizons and look at a broader range of private firms, including smaller and medium-sized firms.

Click here to search for small attorney jobs on LawCrossing.

But job availability isn't the only factor driving law students to small firms. Some observers believe there has been a subtle, but significant, shift in values among young Americans as a whole.

Workplace experts say that the combination of a prolonged recession, the Sept. 11 terrorist attacks and corporate scandals has caused Americans to focus more on families and quality of life than status-symbol careers.

Polls show that Americans are increasingly interested in choosing jobs that offer more fulfilling work and more time to be with their families, even if it means lower salaries.

This shift in values fits well with the legal marketplace. Experts remind law school grads that in terms of sheer numbers there are far more small law firms than large ones in the country, and that small and mid-sized firms provide the bulk of employment for the nation's lawyers.

Everybody gets very tied up in this notion that large firms are the best firms. All the bells and whistles seem to go with these large firms, even though statistically, only 10 percent of lawyers in private practice work in firms of more than 100 lawyers."

At a large firm, you can still afford to hide in your office and become a very good draftsman. At a smaller firm, there's a chance for you to make partner early and have an ownership interest in the business.

The range of work opportunities available at a small firm was a major factor in one attorney’s decision.

"I was just smitten with the fact that I would get to do everything from drafting a will to doing a divorce to working on a federal class action," said one small law firm lawyer. "I couldn't find that much variety anywhere else."

Since joining the 15-attorney firm as an associate in September, the small firm lawyer has drafted briefs, taken depositions, argued motions in court and handled divorces. The firm, which specializes in commercial litigation, is well known in Georgia's legal circles, and its attorneys represent clients in courtrooms throughout the state.

"If you come to work here, you're going to get to know state Supreme Court justices in Georgia and federal judges, and they're going to know who you are," she said.

The firm has also encouraged her to bring in her own clients, and in her first case, she successfully negotiated a settlement on behalf of plaintiffs in a homeowners' dispute.

She said that one of her most rewarding experiences has been the legal work she and another female attorney from the firm provide at a discounted rate for women from a local shelter who are victims of domestic violence.

She has also worked closely with one of the firm's partners on a major class-action suit.

"Just to have a vantage point of seeing something that big is amazing," she said. "Then, the next day, I can go to work on defending an insurance company in a car wreck or doing a divorce for a battered wife."

While the diversity of a small firm isn't for everyone, she said she's convinced she made the right career choice in joining a small firm.

"It's for people who are more outgoing and don't want to be relegated to an office or library for the next couple of years of their life," she said. "There's nothing better."

She isn't alone. Lisa Peterson and Stacy Perdue, both second-year law students in Boston, intend to pursue jobs with small firms because they offer greater opportunity for hands-on legal work.

Perdue said she looks forward to the opportunity to "get courtroom experience, have client interaction and be involved in different aspects of litigation."

But while smaller firms may offer more hands-on work experience and a better quality of life, they also generally offer lower starting salaries than large firms.

The median salary for firms of two to 10 attorneys is only half of what large firms offer.

Perdue said she's not particularly concerned with the salary differential between smaller and larger firms.

"My main concern is finding a firm that fits me so that I can learn as much as possible and achieve my career goals while still maintaining a good quality of life," she said. "Legal positions in small and large firms are generally well paid, and I'm not concerned with making a 'top' salary."

Woodward said that her salary is less than a first-year associate would make at a large firm in Atlanta. But because she went to a public university for her undergraduate education and law school, she didn't have a large debt burden when she graduated. That gave her "a little bit more freedom" in her salary requirements, she said.

On the other hand, smaller firms usually provide more opportunities for quick advancement and ownership opportunities.

At a smaller firm there's a chance for you to make partner early and have an ownership interest in the business. You also have the opportunity to make a lot more money in the long run. If you're at a small firm and you become an expert in something, such as plaintiff's personal injury work, you can hit it big very young.

In contrast, a lot of young lawyers start out at big law firms, but the washout rate for associates is extremely high.

The chances of you becoming a partner at a big law firm are like winning the lottery.

For many attorneys, the tradeoff in income is well worth the experience they gain working at a small firm.

"If you're wanting to pull in a big paycheck, definitely go to a big firm," Woodward said. "But if you want to be a lawyer, go to a small firm."

Benefits of a Small Legal Firm, Career in Law and Hiring
The Youngest and the Best: Georgia State University College of Law

I'm really pleased with LawCrossing as I was looking for a job anad I found one here.
Pascal