Share
Tweet
Linkedin
160 Views
( 23 votes, average: 4.1 out of 5)
What do you think about this article? Rate it using the stars above and let us know what you think in the comments below. 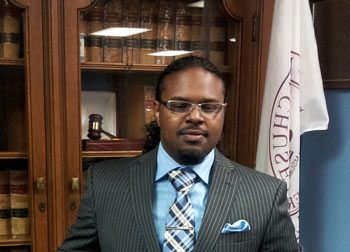 Ali A. Shuaib is a third year law student at Massachusetts School of Law and anticipates a December 2014 graduation. Although he has several areas of interest, including corporate and business law, he wants to specialize in international law. Ali plans on taking the Massachusetts, Connecticut, and Pennsylvania Bar Exams.

Ali was born in Saudi Arabia and he resides in the United States.He comes from a Moroccan and Sudanese background. When asked about his upbringing, he said, "I have very proud parents. I grew up in a small house with an elder sister and a younger brother. But I also have five older stepsisters who reside overseas." Ali continued to say that he is grateful for his parent's moral support. He also admired his oldest sister for encouraging him to do more in life.

Since 2012, Ali has been a member of the Black Law Students Association at Massachusetts School of Law. He also has been a member of the International Law Students Association, Student Bar Association, and the Barristers Club since 2013 2012. Additionally, Ali participated in three trial advocacy classes and was the recipient of the 2013 Governor's Citation in recognition of winning the NBLSA Northeast Thurgood Marshall Trial Competition.

From 2013 to 2014, Ali served the Committee for Public Services Counsel, where he interned as a legal intern. He was responsible for client meetings, legal research and writing, and he accompanied attorneys to court.

During the spring of 2014, Ali served the Haverhill District Court, where he interned in the Office of Clerk's Magistrate Doris Stanziani. He observed civil and criminal litigation proceedings, assisted the Clerks in daily activities, and he assisted the ADAs in their workflow of case management.

During the summer of 2014, Ali served the Middle sex District Attorney's Office Prosecution Program. He interned as a student prosecutor under Rule 3:03 in which he represented the Commonwealth in bail hearing and arguments in the District and Juvenile Court.

Since 2012, Ali has served the Massachusetts City Attorney's Office in the City of Lawrence. He interned as a student practitioner under Rule 3:03 in which he represented the municipality in civil matters, specifically in Housing Court, which dealt with receivership matters and health code violations. Ali added, "In all my internships I reflected a positive image. I was hardworking, honest, and trustworthy. Most of all, I've always tried my best to find an answer or solution to any problem."

When he isn't working, Ali enjoys playing soccer, boxing, and reading. He is a frequent visitor of Philadelphia's Saad's Halal Restaurant. Ali also enjoyed reading Debbie Hagan's Against the TideandIbnKathir'sThe Beginning and the End.

Why did Ali go into the law? "Because unlike other fields, law is like an ocean.It's very broad in what a person can do within this field, from Criminal Law to Corporate Law to International Law. It's amazing how everything is legally connected by the rule of law from a simple contract to an international agreement. I want to become part of this broad and amazing field."

What are his key accomplishments? "I made my parents proud of me."

Ali discussed his key strengths and skills that he would like to use to advance his career goals. "My diverse background and ability to easily interact with individuals from different cultures and ethni cities."

Is there any particular achievement or activity that he has been involved in and which he would like to share with our readers? "I founded the International Law Students Association at MSLAW, during which we hosted a diplomat to come speak at our school."

As for his weakness, Ali candidly admitted, "I am working on not getting distracted easily."

Since law school can be hectic at times, he pointed out how he relieves stress. "I exercise, go out for a run, or I cook."

Many readers are probably wondering how Ali handles new assignments. The third year law student shared his process: "I can easily adapt to a new environment and easily learn new assignments and processes."

Where does he derive his confidence? "From looking up at my role models and trying to be like them."

If Ali had three wishes, what would he wish for? "To be as much a man as my father, become a judge one day, and always be looked at as a humble and good person."

In regards to handling fear, he said, "I pray."

Has Ali faced any obstacles in his life? "I grew up in a low income family, and seeing both my parents struggle to get by gave me the confidence to try to become successful and make them proud."

Where has he traveled? "I have been to Saudi Arabia, Sudan, Egypt, UAE, and Jordan, and UK."

Does Ali have any legal role models? "My grandfather was a judge, and two of my eldest sisters overseas are attorneys. I also admire Justice Thurgood Marshall."

What is his personal philosophy? "Always be humble and treat people with good character, and you will leave a good impression."

The future attorney discussed what he believes holds more truth in light of his personal philosophy. Was it fate or choice? "Choice because we all have a choice and the decision to act or not to act."

Ali's first favorite quote is by The Prophet Muhammad: "Have taqwa (fear) of Allah wherever you may be, and follow up a bad deed with a good deed which will wipe it out, and behave well towards the people." His second favorite quote is by Ali IbnAbiTalib: "Everyone who is taken by death asks for more time, while everyone who still has time makes excuses for procrastination." His third favorite quote is by Shakespeare: "Love all, trust a few, do wrong to none." Ali said Shakespeare's quote resonates with him because it's a model line everyone should follow. His final quote is by Abraham Lincoln: "Nearly all men can stand adversity, but if you want to test a man's character, give him power." Ali believes if you follow these three quotes you will have a positive impact in the world.

Is there anything else you care to share professionally or personally? Professionally, "Always try your best and give it all you have, and you shall not fail." Personally, my father always has told me "offer help to others and forget it."

Looking for a law clerk job as a law student? Click here to access law clerk openings on LawCrossing.

I really like the site. It was very useful in providing exactly the types of positions I was looking for.
Jessica