Share
Tweet
Linkedin
219 Views
What do you think about this article? Rate it using the stars above and let us know what you think in the comments below. 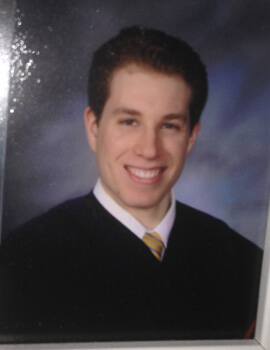 Jedidiah Bernstein is a May 2014 graduate of Brooklyn Law School. He is interested in several different areas of the law, including corporate law, with plans to focus on practicing labor and employment law in New York. Jedidiah plans on taking the New York and New Jersey State Bar in July 2014.

Jedidiah was born and raised in Westchester, New York. He grew up with his mother, father, and older brother who recently graduated from business school. Jedidiah graduated with a B.A. in Philosophy, Politics, and Law and minored in Global Studies from Binghamton University in December 2009. From 2008 to 2009, Jedidiah served as president and was the founder of the Table Tennis Club. In 2008, he studied abroad in Spain, served as a member of the Thurgood Marshall Pre-Law Society, and he was a volunteer organizer for Barack Obama's Presidential Election Campaign. In 2009, Jedidiah served the Office of General Counsel of the Metropolitan Police Department and was vice president of the Circus Arts Club. During this time, he also served the Legal Aid Society of Mid-New York. Jedidiah made the Dean's List while studying at Binghamton University.

From June 2012 to August 2012, Jedidiah served as a legal intern for the Office of the Nassau County Attorney in Mineola, New York. He investigated and prepared memoranda for successful motions relating to termination of parental rights and notice of highway defects. Jedidiah also researched and composed memoranda regarding whether the Freedom of Information Law required disclosure of police reports or police officers' applications for firearm licenses.

During the summer of 2012, Jedidiah served as a judicial intern at Suffolk County District for the Honorable William G. Ford. He conducted legal research and drafted proposed opinions on a range of criminal matters concerning DWI roadway checkpoints, assault, hit and run, and petit larceny cases.

From September 2012 to December 2012, Jedidiah served as a judicial intern for the Law Department at Kings County Supreme Court. He researched and drafted proposed opinions for cases involving claims of employment discrimination based on race, sex, or retaliation for prior complaints, negligent hiring, psychiatric malpractice, and discovery issues.

From October 2012 to December 2012, Jedidiah served as a judicial intern at the Equal Employment Opportunity Commission in New York for the Honorable Lisa D. Sirkin. He conducted research and wrote multiple proposed opinions determining motions for summary judgment regarding whether complainants were discriminated against on the basis of race, age, or retaliation for prior complaints.

From January 2013 to May 2013, Jedidiah served the United States Postal Service's Law Department in New York. He investigated and composed motions for summary judgment for employment discrimination claims based on race, sex, national origin, age, and retaliation for prior complaints. Jedidiah's cases involved improper activity, misuse of resources, and inappropriate comments.

From June 2013 to November 2013, he served as a law clerk intern for the Social Security Administrations' Office of General Counsel. Jedidiah investigated and drafted proposed agency opinions regarding terminating an employee, federal workers' compensation, employee ethics, and whether an employee could act as representative payee. He researched and composed motions to dismiss concerning employees' alleged tort and civil rights violations. Jedidiah investigated and wrote proposed opinions on privacy and eligibility for benefits. He also orally presented legal findings to supervisors.

From September 2013 to May 2014, Jedidiah served as part-time law clerk at the Law Office of Leon Fine, Esq. He worked from New York for an Israel-based attorney on his New York matters. Jedidiah researched and drafted memoranda on whether an employee in Israel qualified for Federal loan forgiveness, on whether an Israeli may be probated in New York, and on whether a New York default judgment was enforceable in Israel.

Why did Jedidiah go into law? "To help people and to learn about policy and the legal system. I also enjoy thinking critically and am detail-oriented."

What are the areas of the law he hopes to practice? "Labor and Employment law or Corporate law."

Are there any particular achievements that he would like to share? "I greatly enjoyed co-hosting the Brooklyn Law School Labor & Employment Law (LELA) Alumni Night we held in March 2014. I enjoyed being in contact with attorneys and fielding scheduling/logistical questions and issues. I also enjoyed giving a speech for approximately 100 alumni and students who attended the event. The speech focused on the value of alumni in the LELA community."

When asked about his key accomplishments, Jedidiah stated, "Maintaining a high class rank in law school and obtaining the CALI award for the highest grade in my Employment Law class."

He then discussed the key skills and strengths that he will use to further his career goals. "I am able to connect with people by listening and thinking broadly about situations. I am adept at seeing patterns/habits. I am a great writer, researcher, and critical thinker. I am very driven towards my goals."

Law school can be stressful at times, so Jedidiah shared how he relieves stress. "I like taking walks if I am stressed. I also like to write down my goals and current assignments."

How does he handle new assignments? "It varies based on the assignment. I generally like to understand the broad situation/topic and then focus on the specific issue. I ask questions if necessary."

If Jedidiah had three wishes, what would he wish for? "1. I wish there to be equality amongst every individual in the world, meaning no discrimination, lack of poverty, and lack of hunger. 2. I wish technology will enable humans and the environment to co-exist. 3. I wish for everyone in the world to live peacefully."

What is his top priority outside of work? "Cultivating interpersonal relationships."

Has Jedidiah been part of any study abroad program? "Yes, Spain in 2008 and China in 2013. I would highly recommend both places. Traveling has sharpened my mind. I like being exposed to new situations, new perspectives, and new ways of living. I've also traveled to Portugal, Italy, Turkey, Israel, and Japan."

Does he have a most influential traveling experience? "My most influential traveling experience was when I went to Tokyo in 2013. I was amazed at the strength of the social contract there - everyone walks on the same side of the road and everyone was helpful, the subways, city planning, and technology were futuristic. At the same time the city has parks that are the most peaceful places I've ever been. Also, watching a Sumo wrestling tournament was one of my favorite experiences."

In regard to handling fear, Jedidiah said, "I acknowledge it and don't let it hinder me."

Has he faced any obstacles in his life? "Law school constantly has obstacles, but I persevere and get through them one day at a time."

Personal Philosophy, People You Want to Surround Yourself With and Final Thoughts

What is his personal philosophy? "Keep positive and keep striving towards your goals. Listen to others and learn from them. Constantly be learning and improving. Be imaginative and keep an open mind. Think things through, and think critically. Constantly adapt to new things, ideas, challenges, goals, and technology. Take in both the big picture and details. Control your emotions and maintain personal happiness."

The future attorney discussed what he believes holds more truth in light of his personal philosophy. Was it fate or choice? "We must focus on choice." Jedidiah continued to say that people should make the right choices and take control of their lives.

What kind of situations and people is Jedidiah attracted to and what kind does he avoid? "I am attracted to situations where people are positive, where new learning and thinking are occurring, where interesting ideas are exchanged, where individuals listen to each others' points of views, and keep an open mind; where people seek the truth instead of trying to validate their viewpoints." He added, "I enjoy making personal connections." As for situations and people to avoid, Jedidiah asserted, "I try to avoid situations where I am not learning anything new/thinking about something interesting. I also try to avoid situations where people are thinking negatively instead of positively."

When asked if he had anything else to share personally or professionally, he said, "I'm a hard-worker and am cultivating my legal judgment in order to be an exceptional attorney."

If you're trying to find a law student summer job, click here.

LawCrossing has a great bunch of jobs. It has both quantity and quality of postings. Excellent website!
Charles

LawCrossing Fact #226: We offer entertaining features such as your favorite video games in computer format.