Share
Tweet
Linkedin
285 Views
( 38 votes, average: 4.1 out of 5)
What do you think about this article? Rate it using the stars above and let us know what you think in the comments below. 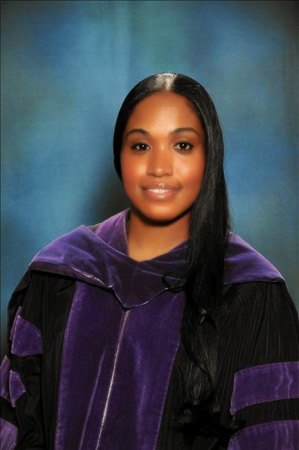 Kaylia Antoinette Diah is a third year law student at Paul M. Hebert Law Center at Louisiana State University and anticipates a May 2014 graduation. Although she has several areas of interest, she plans on practicing immigration law while focusing on public interest work during her career.

Kaylia was born in Jamaica and raised in the United States. When asked about her upbringing, she stated, "I grew up in a house full of women with my mother and two sisters. I believe that it is because of my upbringing that I am the strong woman that I am today."

Kaylia earned her Bachelor of Business Administration in Marketing from the University of West Georgia in May 2009. During undergrad, she made the Dean's List and she was a Multicultural Achievement Program academic honoree. From 2005 to 2006, Kaylia served as a member of the Pre-Law Learning Community, which gave a selected number of students the opportunity to have a mock law school experience. "We had a set schedule, which is similar to how the law school system of 1L sections work. We focused on courses that would force us to think critically in preparation for law school." From 2006 to 2008, she served as a member of the American Marketing Association and she was the Vice-President of the school's NAACP chapter from 2007 until 2008. From 2007 to 2009, Kaylia served as a member of the Student Activities Fee Budget Allocation Committee. She represented all of the minority women on campus to assist with determining how the student activity fees that were collected by every student as a part of their university fees would be allocated across campus. During this time, Kaylia was also active with the Student Government Association.

In 2012, she participated in the LSU Law Center's Public Interest Externship Program, which allowed her to serve as a law clerk for the Baton Rouge Capital Area Alliance for the Homeless. Kaylia worked with her supervising attorney to assist homeless individuals in the community, who also suffer from some form of mental illness. She was able to do the intake process, then assist with the processing of social security applications and veteran benefits applications. "We also had to work closely with psychiatrists to assist with mental evaluations. We were able to get most of our clients benefits based on their mental capacity. My presence made a difference because I was surprisingly able to connect with our clients and gain their trust. I still check on some of my past clients." Kaylia also helped to make reference folders for the staff to assist with their knowledge of current laws. She made these binders by performing extensive legal research.

In August 2013, she participated in the National Institute for Trial Advocacy (NITA) program. During this time, Kaylia also worked with the LSU Law Immigration Clinic, which gave her the opportunity to represent a young man from Mexico who was seeking relief through the Deferred Action for Child Arrivals process.

When the University of West Georgia alumna isn't studying, she enjoys traveling, watching sports, and spending time with her family and friends. Kaylia also enjoyed reading William P. Young's The Shack. Although she loves eating at different restaurants with her friends, Kaylia is a frequent visitor of Atlanta's Seasons 52.

Why did Kaylia go into the law? She noted:

"I was born in Jamaica, so when my family moved to the United States, we had to go through the immigration and naturalization process. It was an extremely difficult and nerve-wracking experience. We worked with an attorney who gave her all to our case, and while it took years, she never gave up fighting to get us to the finish line. She did, however, not show up to our final appointment and it hurt my family greatly. She had been so amazing, and when we felt like we needed her the most, she wasn't there. Luckily for my mother and I, we went into the appointment and we were granted our lawful permanent resident status. I want to be the attorney who goes the distance, from the beginning to the very end."

What are the areas of the law she hopes to practice? "I would love to be an immigration attorney, but I am also hoping to do some public interest work later in my career. I basically want to be an advocate for those whose voices are not easily heard."

Kaylia shared her aims and aspirations. "I want it all. I want the successful career, the husband, and children. I just want to be happy in life. Having a family of my own one day is just as important as my career. I watched my mom do it all, and I know that I am up to the challenge as well."

Are there any particular achievements that she has been involved in which she would like to share with our readers? "In 2012, I worked with the Greater Baton Rouge Food Bank to stuff bags for children who don't have meals when they go home. There is an astonishing number of elementary aged children in the Baton Rouge area who don't eat food when they go home."

What are Kaylia's key accomplishments? "I had difficulties that I had to face growing up, and I am extremely proud of myself for never giving up, for working hard, and never stopping until I graduated from undergrad and moved on to law school."

She discussed her key strengths and skills that she would like to use to advance her career goals. "I don't give up easily, and I know that this will transfer to my career because I will put my all into my clients. I also think before I act, so that I will make the best decisions possible."

As for her weakness, Kaylia admitted, "I don't know when to give up. I don't like when people leave my life, or I can't fix an issue, and I need to learn that there are some things that I cannot control."

Since law school can be hectic at times, she pointed out how she relieves stress. "I stop and say a silent prayer to myself. Stress is terrible to deal with. I know this first hand, and it is best to take a moment to breathe, pray, and then start again. I also find it helpful to talk to others. Sometimes being able to speak your problems is helpful."

Many readers are probably wondering how Kaylia handles new assignments. The third year law student shared her process: "I figure out exactly what I need to do, then I make a plan to determine the best way to handle my assignment, then I begin to work. If I encounter issues while working, I stop and brainstorm how to handle the issue, and then I proceed."

Where does she derive her confidence? "From my family."

If Kaylia had three wishes, what would she wish for? "1) To be able to forever take care of my family here in the States and in Jamaica. 2) To have a successful career. 3) To have love and happiness."

What is her top priority outside of work? "I want to be happy, enjoy my family, and hopefully get married and start a family of my own one day."

In regards to handling fear, Kaylia asserted, "I pray and ask God to help me to get through whatever situation I am dealing with."

Has she faced any obstacles in her life? Kaylia replied:

Does she have a most influential traveling experience? "I have been to several states within the continental United States, Jamaica, the Dominican Republic, and the Bahamas. My favorite place is Jamaica, of course. Jamaica will always be home to me, and I enjoy being able to go there to spend time with my family. I also believe that Jamaica has the most beautiful beaches."

Is Kaylia involved with community service? "During the spring of 2012, I stuffed food bags for the Greater Baton Rouge Food Bank for children who don't have meals when they go home Since 2013, I have also helped to increase enrollment and have been involved in activities with students at the Peace Academy in Snellville, GA."

Does Kaylia have any legal role models? "Thurgood Marshall, because until his retirement from the highest court in the land, Justice Marshall established a record for supporting the voiceless American."

What is her personal philosophy? "Never give up."

The future attorney discussed what she believes holds more truth in light of her personal philosophy. Was it fate or choice? Kaylia stated:

"Choice. I believe that people choose to give up on something, or to stick with it. We make decisions in our lives that will allow us to get where we belong in life. Some of the decisions that we make in life we will regret, but we have to choose to live with those, or to make them right. I don't think that it is ever too late to right a wrong, or to make the choices that will make us happy. It is always best to choose what will make you happy."

Her favorite quote is by George Adair: "Everything you've ever wanted is on the other side of fear." She said the quote resonates with her because fear prevents people from trying something new. Once they are able to overcome their fears, something good will emerge from their anxieties.

I asked her if there was anything else she wanted to share professionally or personally, and she said the following: "I am an extremely passionate person who only wants the best out of life, not only for myself, but also for those around me. I am proud of where I am in life, and I continue to pray that my future will be blessed and prosperous. I am anxious about starting my career and making a difference. As a soon to be graduate, I am ready for the next chapter of my life." Kaylia continued to say that she possesses admirable qualities that will help her become a great attorney, which include being ambitious, relentless persistence, and working hard until she accomplishes her goals no matter how large or hard her tasks are.

LawCrossing is a well managed site with timely updates and replies.It is fast, accurate, and saves a lot of time.
Charles

LawCrossing Fact #121: We know how to get results. Whether you’re just out of school or looking for a career change, we know how to move you in the right direction.