Share
Tweet
Linkedin
5 Views
( 3 votes, average: 3.5 out of 5)
What do you think about this article? Rate it using the stars above and let us know what you think in the comments below. 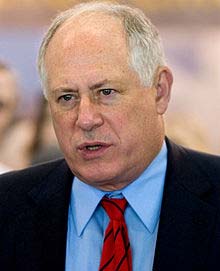 Illinois Governor Pat Quinn signed the state's new pension law in an effort to stabilize the state's economy and bolster its credit ratings. The bill was signed behind closed doors without much fanfare. While signing the measure, Quinn commented that the new pension law was "a serious solution to the most dire fiscal challenge of our time."

However, the controversial law which seeks to cut and amend pension structures and payments is likely to meet stiff opposition and court challenges. At issue is the notion of public pensions being an "enforceable contract" as embodied in the state constitution, which the new law seems to violate.

In order to justify the validity of the pension law, the statute includes provisions that would allow pension systems to sue to enforce employer share, employees would be required to contribute 1 percentage point less to their pensions, and some employees could opt for a 401(k) type of retirement plan.

However, worker's unions are less than happy and the We Are One Illinois coalition of unions has already dubbed the new law as an attempt to steal pensions.

The coalition said in a statement "Leading politicians and their followers chose to violate their oaths of office, trample on the Illinois Constitution, and willfully ignore the plain letter of the law." The statement warned that "the state's finances and pension systems will be left in worse shape," by the new law.

Public employee unions would be challenging the law in courts and would seek to block it from being implemented. But, at the helm of a state with a $100 billion public employee pension debt, there seems to be little choice left than to cut pensions.

I loved the ability to email searches to myself that were in the areas of law I wanted to practice.
Edward M.