New York Law School Directory
< Back To All Articles

Share
Tweet
Linkedin
625 Views
( 83 votes, average: 4.5 out of 5)
What do you think about this article? Rate it using the stars above and let us know what you think in the comments below.
Personal Life 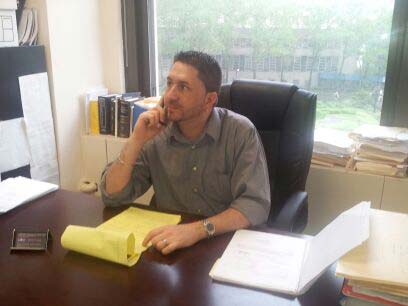 John F. Alderson owns and manages DOCPREP Paralegal Services, which is based in Downtown Brooklyn, NY and has a satellite home office Queens, NY. His business serves clients in Long Island, Westchester and all over the 5 boroughs of the New York City area. John is a paralegal who specializes in uncontested divorce, as well as contested divorce, immigration applications, family law (including custody, visitation, support, maintenance, family offense and ACS matters), Chapter 7 Bankruptcy, civil/business litigation, landlord/tenant evictions and defense, and will preparation. He can also provide 24 hour mobile notary service in Queens County.


In addition to running his own company, John serves as an independent contractor as the Managing Paralegal of the long established Law Office of George M. Gilmer, Esq., a general practice attorney located in the heart of Brooklyn, NY.

Prior to founding his company, John managed large restaurants including Outback Steakhouse and Buffalo Wild Wings. He has four years experience as a legal staff member, and three of those years have been devoted to successfully running his business in the New York City area.

Thumbtack.com has rated DOCPREP Paralegal Service as the #1 paralegal service in all of New York City, and DOCPREP’s website has a plethora of outstanding reviews.

John, a dual-citizen, was born and raised in London, England, until he came to the U.S permanently in 1988. He grew up in Rockland County, New York. He is currently married, and in March 2013, he and his wife had a baby girl, Lily. He also has a 12 year old son, Liam, from a previous marriage, who resides in Buffalo, NY, where John attended college.

When he isn’t working, John enjoys playing and listening to music, watching crime dramas and popular blockbuster movies. John used to be in a few bands and is a self-proclaimed amateur bassist and drummer. He is a frequent visitor of Outback Steakhouse, an Australian-themed American casual dining restaurant.

Does John have a most memorable educational experience? He said, “Graduating.”

Why and when did John decide to become a paralegal? “It all started with the law firm I manage today. Back in 2010, I obtained a paralegal certificate and did an internship with the said law firm. At the attorney’s suggestion, I started my own freelance paralegal services company, DOCPREP Paralegal Services, to assist other attorneys and pro se litigants, under the supervision of that attorney, while simultaneously managing his office 4-5 days a week.”

When asked if he transitioned into law, John explained:

“After obtaining a paralegal certificate, I took an internship at a Brooklyn sole practitioner – general practice attorney. Within 6 months, I had learned the basics of divorce, family law, bankruptcy, civil litigation, and landlord-tenant law. Since then, I have (in my opinion) quasi-mastered many of these areas of practice, especially divorce, family law, landlord-tenant evictions, and gained a well versed knowledge of immigration applications, Chapter 7 Bankruptcy, and civil litigation practice.”

So what is the number one reason why people get a divorce? John acknowledged that most couples dissolve their marriage due to money issues. He added, “If it’s not about money then it’s about cheating or suspicion of cheating.”

The businessman discussed the best part about his job. “I enjoy assisting my clients and the attorney I work for in drafting and researching different arguments on an almost daily basis, and, of course, obtaining positive outcomes for my clients, and the clients of the law firm I manage.”

John also discussed why he appreciates working for himself. “I am my own boss. I am 100% responsible for my own clients and I don’t have to count on anybody else. I treat each and EVERY one of my clients’ cases as I would my own.”

What is the paralegal known for professionally? “I am known for my quick and affordable service. Individuals say I am more knowledgeable than some attorneys they have dealt with in the past. I have been exposed to a lot since working with the Law Office of George M. Gilmer, and greatly appreciate the opportunity working with him has afforded me. My writing, knowledge and exposure to the law have all greatly improved over time, and I can transfer those skills to properly assist my clientele. My clients are often surprised that I know what I know.” John also noted that he is best known for handling divorces and family law issues.

John gave his opinion about the current assessment of the legal market. “I’ve been told it has never been as bad financially as it is now due to the economic collapse, however it is still a very rewarding career.”
He also gave his opinion about the paralegal legal field today. “The economy has affected the field in a big way, and it is sometimes hard to count on a paycheck every week, especially as a self-employed business owner.”

What would John change about the paralegal field? “I would support what I have read about certain suits like those in Washington State, where certified paralegals are permitted to practice law without an attorney’s supervision. There is no reason why paralegals can’t draft paperwork for their own clients, especially since many of them have been doing this for ten to twenty years, and are more than capable, if not more so than most attorneys, especially those who are just recent law school graduates. I have seen firsthand that paralegals are the backbone of the high-volume legal industry.”

Since John has four years experience as a legal staff member, many readers may be wondering what advice he has for new legal staff members. He advised, “Learn as much as you can as fast as you can. Being a well rounded paralegal is much more rewarding than being only competent in one or two areas of practice.” John continued to say that paralegals who are familiar with several areas of the law can be much more competitive in the paralegal market. He also believes a well-rounded paralegal will not be bored with their position, and will find it much more rewarding.

What advice would the businessman give to students who are thinking about becoming a paralegal? He jokingly said, “They can follow the same path I did, WITHOUT being my competitor.” John suggested that students should obtain their paralegal license or certification from an ABA approved program, so they could get paid more than ten dollars an hour. He also recommended students find an attorney or law firm who will properly train them to be a paralegal.

Where does John see himself in five years? “I hope to continue doing what I’m doing for life. I hope eventually to make the connection to a prestigious law firm that can give me and my family the financial stability I desire for the long term.”

When asked if he considered expanding his business, John replied, “It depends on who I meet. Also, the location would have to be outside of New York City. I could hire a manager at another location, but I don’t like to depend on other people that I cannot personally supervise. I haven’t yet met a paralegal yet who can match my speed, accuracy and knowledge who I can trust with my business and its reputation.”

If John wasn’t a legal staff member, what would he be doing? The humorous paralegal stated, “Prior to this career path, I was a manager of large restaurants. That is my fallback position; [If I didn’t have that,] I would be hitting my mom up for law school money, or playing bass and drums in front of sold-out arenas as fill-in for Pink Floyd (in my dreams).”

Why is John motivated every day to do his job? He said, “I enjoy being financially stable and taking care of my family and my clients.”

Admiring a Nonprofit Organization, What Would Be Impossible to Give Up, a Rewarding Position and John’s Goals

Does John admire any nonprofit organizations? “I admire the American Red Cross who I saw at work locally after Hurricane Sandy.”

What would be impossible for him to give up? “NOTHING, you take your opportunities as they come, and if they’re good, you go for it!”

Why does John find his position rewarding? “It’s a respectable position. You can make a decent living being a paralegal. I also enjoy being my own boss and meeting with individuals at any time.” John pointed out that he doesn’t have to work at eight o’clock in the morning. He prefers being a night owl, and despite the workload, enjoys being almost primarily responsible for more than a hundred different cases at any given time.

Is there a downside to his position? “I don’t have more time for my family, friends or a social life.”

*** John Alderson is not an attorney. He cannot and will not give legal advice, nor provide representation in court. ***

LawCrossing has the largest collection of the job listings and these listings are organised in the best way possible.
Andrew

LawCrossing Fact #77: Users will find their dream jobs more easily when they search using keywords because it will help narrow their job searches.