Importance of Letters of Recommendation in Law School

Share
Tweet
Linkedin
3692 Views
What do you think about this article? Rate it using the stars above and let us know what you think in the comments below.
Recommenders are people who know you well and can objectively describe activities you have been involved in or comment on your character, talents, or intellect. They fill out forms or write letters. Although a few law schools discourage you from submitting letters of recommendation, most actively seek them, claiming that they provide valuable information about your potential for success in law school. 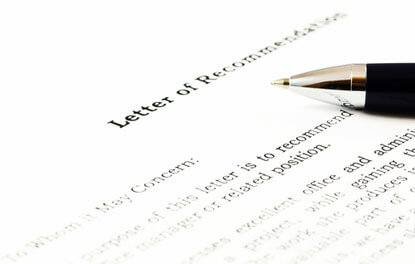 Each law school determines how many letters of recommendation it wants you to submit. Most indicate, either in their catalogs or in the instructions that accompany the packet of blank application forms, that they require or "strongly recommend" two, three, or four. If you don't submit the required minimum, the law school may consider your file incomplete and take no action on it. Some law schools try to notify candidates if their files are incomplete. Others do not. Whether you are notified or not, you'll be rejected if your file remains incomplete when the school's application deadline has passed.

Some law schools have set maximums or ceilings. They state in their catalogs that they will read no more than four, or five, or six letters for any one applicant. They do so to protect themselves against uncontrollable increases in their workloads. The limits are also meant to discourage you from submitting barrages of letters from famous or politically influential people (perhaps friends of your parents) who know you only superficially. Law school representatives have reportedly received applications accompanied by as many as 30 superficial letters; they view these letters either as camouflage meant to disguise an otherwise poor record or as efforts to exert political influence. (One law school official described a blizzard of letters praising a poorly qualified applicant as an "epistolary snow job.")

Since they may not be read, there's usually little point in submitting more than the maximum number of letters. But there are exceptions. If you are a nontraditional applicant and you want to demonstrate a consistently distinguished, or at least interesting, business career, you should seek a letter of reference from each of the places you have worked. Warn the law school that a large number of letters will arrive by typing something like this on your application:

You may also want to guard against the possibility that one of your recommenders will forget to send off his or her letter. This is not usually a problem. Most professionals and employers consider writing letters of recommendation to be part of their jobs and set time aside for that purpose. College professors, especially, tend to take pride in the professional placement of their former students. In a sense, it's what they have to sell. They're usually quite conscientious about writing useful letters and meeting the deadlines. However, there really are absent-minded professors out there. At some large schools the professors have so many students, and are so consistently overworked, that there is a very real possibility that a form will get misplaced or a deadline will be missed.

If you're worried that one of your recommenders may default, consider the strategy of seeking an extra recommendation. Arrange to submit three letters if two are required, or four if three are required. If all the letters arrive, you may have wasted time and effort. But if one of the recommenders defaults, you will have protected yourself against the risk of having your file set aside as incomplete.

You'll have to choose two to four recommenders, perhaps more. As a rule, you can use the same set of recommenders for all the schools on your application list. The best recommenders are people who know you well and have some special skills or experiences that make them good judges of the talents of young people. Examples include undergraduate teachers who have seen many former students go on to law school, employers who hire and supervise the work of young people, or counselors, psychologists and clergy who work with college students. Lawyers, who have personal experience of legal education, are also desirable recommenders. With certain exceptions, each law school will leave the choice of recommenders up to you.

Some law schools insist on at least one letter from a professor, because teachers are the best situated to comment on an individual candidates intelligence, study-related skills, and academic accomplishments. Professors can often compare candidates with "known quantities": candidates from previous years, law students, and lawyers. Some professors write many letters; prelaw advisers and other teachers of BGE subjects often develop considerable experience in evaluating potential for legal study. As nearby law schools become familiar with a given professor's letters, they may give the letters greater weight. Some law schools divide letters of recommendation into two categories and give all letters from teachers greater weight than letters from other recommenders.

Employers who have been able to observe your job performance and who are in a position to comment on your motivation, enthusiasm, and ability to work consistently and well are also good recommenders. If you are a nontraditional applicant and want your work experience to be viewed as a qualification for legal study, good references from former employers are vital.

If you are a traditional student, all your co-workers have probably also been young people. Your immediate supervisor-the shift manager at the fast food place, the office manager or librarian at your college job-is in a good position to compare you with other students. You should choose a recommender who will make a favorable comparison.

If you have worked in a lawyer's office, your employers will probably consider a letter of recommendation to be part of your reward for a job well done. They have a tendency to exaggerate their influence. Don't overly rely on a lawyers letter simply because she is a friend of the deans, or has worked as an adjunct law professor, or donates lots of money to the schools fundraising efforts. Because many, many lawyer-alumni and lawyer-contributors write letters for various candidates, no one candidate can get any special benefits. Nevertheless, lawyers are desirable recom-menders. They can testify about your work habits. Because they are familiar with legal education, they can comment authoritatively about your ability to perform necessary tasks like working regularly, writing clearly, or operating research computers. Like professors, lawyers can often compare you favorably with successful candidates of previous years.

Coaches and trainers often make surprisingly good recommenders. They know applicants well from direct daily contact, and are in a good position to comment on such qualities as drive, dedication, and persistence. They are often good judges of intelligence and communications skills. But never submit more than one letter from a coach. You don't want to give the impression that your undergraduate education was disproportionately focused on athletics.

As much as possible, you should seek recommenders who can comment on the important activities in your life. If you have been active in political campaign work, a letter from a party professional is appropriate. If you are a religious person who is active in church-affiliated youth groups, charity work, or religious study, your minister is a good person to choose to describe this work. But if your only contact with your minister is an occasional attendance at a church service, he or she is probably not a good person to evaluate your potential for law school success.

Recommenders are most valuable if they are good judges of talent or character, have had a good opportunity to evaluate you, and perceive you favorably.

A letter from a lawyer, even a very respected one, will be of little value if it is clear that the lawyer doesn't know you very well and is writing only out of a sense of obligation to your parents. By contrast, one law school dean told me that he was moved by reading a letter from a construction contractor who described how hard, and how enthusiastically, the applicant worked at a tedious demolition job during a sweltering period of summer employment. Although the contractor was uneducated, he clearly knew and respected hard work. He had observed the applicant carefully over a period of time and the applicant had earned his respect.

Since a recommender should be able to comment objectively, he or she ought not to be a relative or a close friend with whom your contact has been mainly social or romantic. You ought not to seek letters from anyone who is indebted to or dependent on you, like an employee. As a rule, traditional applicants ought not to seek letters from people younger than themselves. Other students, even law students, are not good recom-menders because they haven't had extensive experience judging youthful potential.

Beyond filling in your personal information and completing the waiver, you don't need to write anything on the appraisal forms. Your first chore will be to persuade each of your recommenders to fill them out.

At the outset, you should choose your recommenders carefully. Try to find people with whom you have worked closely. Professors with whom you have done independent study papers, or in whose seminars you participated in thoughtful discussions, or from whom you have taken several courses, are most likely to be familiar with your work. Choose them, rather than possibly more prestigious professors with whom you have had little contact. If a professor has frequently made approving comments about your work, or written warm compliments on your essays, he or she is more likely to write similar approbations in your letters. Professors who critique your written work carefully and write copious comments on your exams and term papers are more likely to write similarly copious letters.

You'll need to contact each recommender at least twice. Although you can communicate with them by letter or telephone, you'll get the best results if you visit personally. As soon as you've finalized your application list, visit the recommenders to ask whether they will be willing to serve as references. For traditional students, this initial contact will come very early in the senior year: late August or early September. Approach professors during their office hours and employers at some convenient time when they are not busy. If you don't have regular contact with a recommender, call for an appointment. At this initial stage, you need do little more than remind the recommenders of who you are and explain what they will have to do. Be modest and polite; the purpose of this first visit is to create a favorable impression and to remind them that they think well of you.

Always indicate how many letters you will need. Don't hesitate to ask recommenders to write letters to five to fifteen law schools. In most cases, they won't write fifteen letters; they'll write one letter and copy it, with perhaps a personalizing end paragraph or two.

How Little the Law Schools Admissions Committee Really Knows About You

Law Camps and Other Places of Legal Education
Promoting Yourself and Preparing for the Law Firm Interview
What Course of Prelaw Study Should I Take?
How to Prepare for Law School in College

LawCrossing Fact #12: LawCrossing’s job board is industry-specific so you only view jobs in your career field.