Son of Lawyer Charged with Representing Himself as One 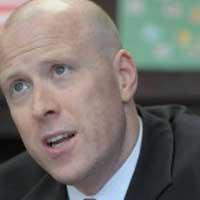 On Tuesday, the son of a reputed Albany Attorney was charged with practicing law without a license. According to prosecutors, Terence Kindlon, Jr., 42, was accused of illegally representing an individual accused of criminal mischief in the New York State Supreme Court. Kindlon was arraigned before Acting Supreme Court Justice Richard D. Carruthers, and his bail was set at a bond of $300,000, or $150,000 cash.


Terence Kindlon, Jr., was charged with unauthorized practice of law, which is a misdemeanor, and with offering a false instrument for filing, which is a felony. If convicted, he can face up to four years in prison. He is also known to have been charged in an unrelated case for stealing a motorcycle, as also a costly bicycle.

Assistant District Attorney Daniel Cort told the court that Kindlon had shown gross contempt for the law “by pretending to be a lawyer in the same courthouse where he had two open felony cases.”

Terence Kindlon, Jr., is known to have attended Benjamin Cardozo School of Law for 2 ½ years and then completed his law training by apprenticeship. He is known to have passed the bar exams in February, but has not been admitted to practice.

The father of the charged person is also named Terence Kindlon, and is a criminal defense attorney and partner at Kindlon, Shanks & Associates. The father told the media in an interview that his son was working with former New York state chief judge Sol Wachtler to fulfill requirements of the character and fitness committee, and get his law license.

Meanwhile, he's now got himself into trouble that's hard to push under the rug. The Manhattan District Attorney, Cyrus Vance Jr. made a statement to the effect that Kindlon junior “was an impostor who abused the trust of his purported clients for his own financial gain.”

I think really highly of you guys. I think this is one of the best lawyer employment sites out there.
Matthew