The Scandal That Shocked America

Share
Tweet
Linkedin
15 Views
( 3 votes, average: 3 out of 5)
What do you think about this article? Rate it using the stars above and let us know what you think in the comments below.
Who is Jerry Sandusky? 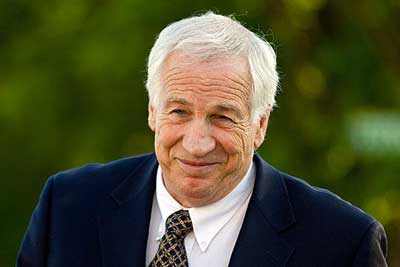 Jerry Sandusky was born on January 26, 1944, in Southwestern Pennsylvania. His father, Arthur Sandusky, is of Polish origin, and his mother, Evelyn Mae, is of Irish origin. Their son grew up idolizing sports and would display his talents after he was enrolled at Washington High School.


During high school, Jerry preformed well inside the class room and received good grades. He was also an exceptional athlete, who excelled at playing football, basketball, and baseball.

The standout athlete started playing as a defensive end while attending Penn State. In 1966, the Nittany Lion graduated at the top of his class and earned a B.S. in health and then received his physical education degree four years later. Jerry married Dorothy Dottie in 1966, and both parents raised six adopted children.

In 1966, Jerry worked for Penn State Coach Joe Paterno before he left briefly to serve as an assistant coach at Juniata College. In 1968, he also served as a coach for the Boston University Terriers. But Jerry quickly returned to his alma mater a year later and continued coaching before calling his retirement in 1999. Jerry had three prominent positions while working for Penn State. In 1969, Jerry was in charge of the defensive line before getting the role of linebacker coach during the 1970 season. By 1977, the Nittany Lion was encouraged to take the position of assistant defensive coordinator and held that title until the end of the 1999 season.

After being promoted to defensive coordinator and linebacker coach, Jerry was very successful in producing highly skilled defensive squads. The Nittany Lions were well known for having excellent linebackers and playing “smash mouth” football. Penn State produced ten All-Americans at the linebacker position. Two notable linebackers to materialize from Penn State and play in the National Football League were Jack Ham and LaVar Arrington.

In 1998, campus police followed up on a claim reported by a mother that her son was molested by Jerry in the Penn State showers. After the investigation by campus police, Jerry retired but received an unusual compensation package that included a large payment of $168,000 approved by Penn State president, Graham Spanier, and the former assistant coach was also able to use the university's recreational facilities.

The Investigation and Charges of Sandusky

On November 4, 2011, a grand jury indicted Jerry on 40 counts of sex crimes against boys. The grand jury acknowledged that eight young boys had been sexually assaulted by Jerry from 1994 to 2009. Perhaps the most well-known indictment came from assistant coach Mike McQueary. In 2002, Mike, who was a Penn State graduate assistant at the time, said he witnessed Jerry anally raping a young boy in the Penn State locker-room showers at the Lasch building. Mike left the shower and reported the incident to coach Paterno. During Jerry's trial, Mike discussed what he said to the legendary coach. Mike stated, “I told him [Paterno] and I want to make sure I'm clear. I made sure he knew it was sexual and wrong. There was no doubt.”

Paterno, according to Mike's testimony, said “You did what you had to do. It is my job now to figure out what we want to do.” The coach informed Penn State athletic director Tim Curley. A week and a half later, Mike was asked to meet with Curley and Gary Schultz, who oversaw the Penn State police department. During the meeting, Mike explained to Curley and Schultz what he saw in the shower. Mike would later testify at the Preliminary Hearing of Curley and Shultz. The former graduate assistant and Penn State quarterback said he told both men in “graphic detail” of the positions of Jerry and the boy in the shower. Mike described the incident as "extremely sexual and I thought some kind of intercourse was going on."

According to the Freeh Report, which was available on July 12, 2012, even though Spanier, Schultz, Curley, and Paterno knew of Jerry's sexual misconduct with boys in the showers in the Lasch building, none of these men prohibited the former assistant coach from entering the Penn State facilities. The report also reveals that Jerry had access to the Lasch Building until late 2011. Out of the ten boys Jerry would be convicted of sexually assaulting, at least five of the victims were assaulted on Penn State's campus or their football facilities after May 1998.

On June 11, 2012, State Deputy Attorney General, Joseph E. McGettigan III, led the prosecution team against defense attorney and Jerry's lead counselor, Joseph Amendola. Although the trial lasted only eight days, the jurors heard from eight witnesses who testified that Jerry sexually assaulted them. Each of the witnesses told the jury they met Jerry through The Second Mile, a children's charity he founded in State College, Pennsylvania in 1977. Each victim recalled their encounter with the former assistant coach, which spanned from the mid-1990s until Jerry retired from Penn State. The abused boys, who are now young adults, told the jury similar stories of how Jerry abused them either in the football locker room showers or in the basement of his home. Amendola unsuccessfully argued that the young men were driven by financial motives.

On June 22, 2012, the jury reached its verdict. After deliberating for 21 hours (over a two day period) at the Centre County Courthouse in Bellefonte, Pennsylvania, the jury, consisting of seven women and five men, found Jerry guilty on 45 of the 48 counts that were filed against him. Jerry faces a maximum sentence of 442 years in prison, which means that the 68-year-old former assistant coach will remain in prison until he dies.

The Aftermath of the Sandusky Scandal

In July 2012, Penn State's football program received strict sanctions enforced by the NCAA because the university did nothing to prevent Jerry from attacking his victims. According to ESPN.com, the NCAA stated, “‘an unprecedented failure of institutional integrity leading to a culture in which a football program was held in higher esteem' than the university's values.” The NCAA “ barred the school from postseason play for four years, fined it $60 million, stripped it of future scholarships and invalidated 112 of the football team's wins over the handling of abuse complaints against former assistant coach Jerry Sandusky, who was convicted in June of 45 child sexual abuse counts.”

The family of former football coach Joe Paterno, who was forced out by the board of trustees shortly before his death in January, has sought to appeal the NCAA's decision, but the organization has stated their conclusion is not subject to appeals. The Paterno family also had to witness the removal of JoePa's statue from outside Beaver Stadium. On July 22, a work crew removed the 7-foot, 900-pound bronze statue by forklift and placed it into the lower level of the stadium.

Behind the Paterno statue was a three-sided stone wall. The middle section of the wall exhibits four Nittany Lion football players following Paterno, who is depicted running onto the field with his right index finger extended. In the middle section of the wall is a quote from the legendary coach: "They ask me what I'd like written about me when I'm gone. I hope they write I made Penn State a better place, not just that I was a good football coach."

What if Spanier, Schultz, Curley, or Paterno had called the police? Would Penn State still be tainted from sexual scandal that Jerry left behind? They would have exposed a sexual predator, which would have gotten national attention, but they would have prevented and saved the molestation of many more young boys. The truth is that these men were thinking about Penn State's football program and decided to protect the program because they didn't want to lose any money. By doing so, they destroyed their reputations, and in the process brought down probably one of the best college football programs in the country.

LawCrossing is an incomparable search engine, it has a titanic number of listings which are of great help.
Matthew

LawCrossing Fact #116: We’re cutting edge. A lot of the jobs we post require big-time skills, so we attract some of the most accomplished professionals out there.